The pathway to the telecommunications equipment and services business is littered with the corpses of companies that were slow to innovate or too big to react to changing times. While Alcatel-Lucent (ALU) does enjoy a size advantage, it does not necessarily have a wide enough competitive moat to stave off the competition.

Based on the above stock price chart of ALU and its leading competitors, Cisco Systems Inc. (CSCO) and Ericsson (ERIC), it is plain to see that ALU's fortunes seem to be lagging behind the competition. Shareholders may be rightfully questioning whether, given the current competitive landscape, ALU is a Buy, Hold or Sell.

Let's review some key fundamental and technical data for ALU that might help answer that question. 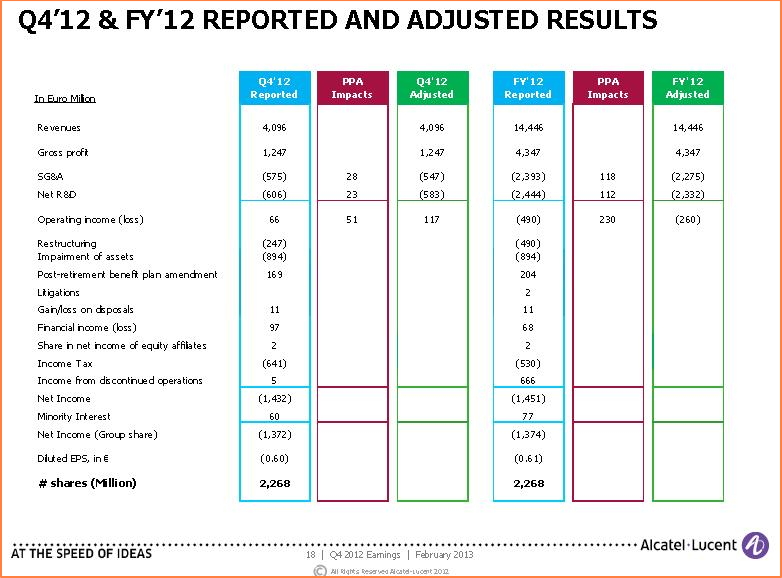 Two items of significance that were a major source of drag on the company's 2012 earnings included a €490M Restructuring charge, and an Impairment of Assets charge of €894M. The Restructuring charge was the highest in a 3-year reporting cycle (€203M in 2011 and €371M in 2010).

The latest financial results, however, also included some “good” news for the company. Although ALU ended the year with a balance of €3,402M in Cash (which was slightly below the previous year €3,543M figure), the Net Decrease in Cash and Cash Equivalents was much lower (€-141M) than that of the prior year (€-1, 497M). This is an example of a situation where “less bad” can be considered “good”.

What investors and shareholders should be concerned about, though, is the segmented earnings reported by the company. Of the 2012 Total Reportable Segment losses of €167M (compared to a significant profit of €515M in 2011), only Software Services & Solutions reported a profit (€297M). The other two segments (Networks and Enterprise) reported losses of €452M and €12M respectively. This contrasts sharply from the last 2 years when all 3 of the company's operating segments reported profits.

Overall, the company's financial results for 2012 were an exceptional disappointment for shareholders hoping for major good news.

However, when viewed on a forward Price/Earnings basis, at 72.5x ALU is trading at an almost 420% premium to the S&P 500 average, which trades at 13.9x. Both CSCO and ERIC, trading at valuations of 10.0x and 14.1x their Forward/PE, have a comparatively reasonable valuation when measured against the S&P 500.

Continue: Why Alcatel-Lucent is a HOLD and a Potential STRONG SELL on Any Weakness