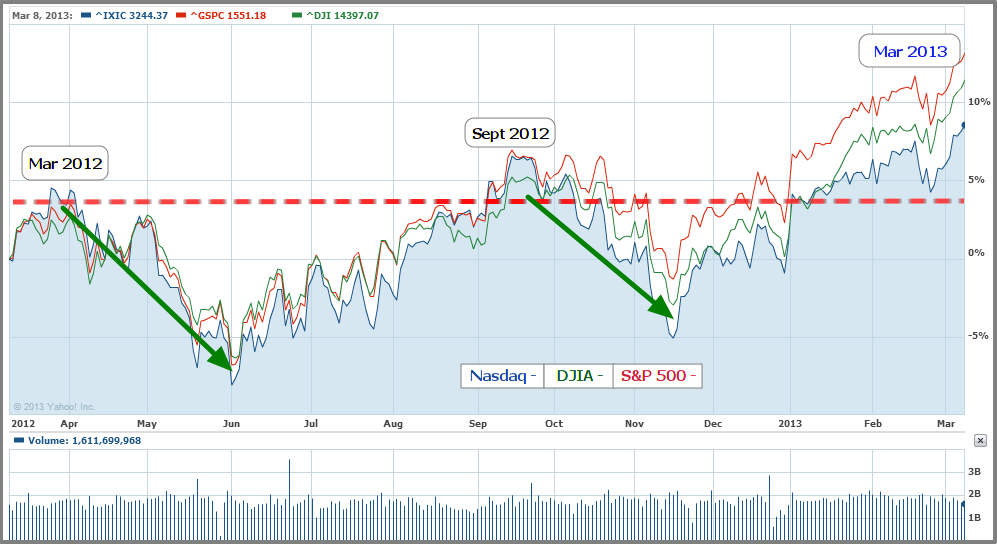 As of a week ago, the Dow Jones Industrial Average continued to breach new highs while the Nasdaq and S&P 500 continued their upward match to levels never before reached. The longest winning streak since 2004 has taken the US stock market into uncharted territory.

“We're certainly off to a great 2013,” said Jack Ablin, chief investment officer at BMO Private Bank. "But we may have gotten a little ahead of ourselves."

There are many factors contributing to this run up in stock prices, the biggest factor being Ben Bernanke and the Federal Reserve Board (FRB). The various quantitative easing (QE), especially the existing "QE Infinity”, have in combination enabled a continual increase in asset (stock) prices. Improvements in hiring by employers (stronger-than-expected nonfarm jobs number) and other expanding economic indicators have also contributed to this long-run rally.

Major Indexes Surge past their One Year Peak

As seen on the chart below, all three major indexes have surged above their One Year Peak line. In the past one year (in March and again in September), whenever stocks have climbed above this horizontal line, they have been met with a stock market correction, averaging 5-10%.

(Related News: Protecting Yourself against a Market Correction – Defensive Investing)

In January 2013, investors scrambled to accumulate stocks after Washington reached a Fiscal Cliff deal. As reported by CNN Money: “The rally, which pushed stocks near all-time highs, coincided with record inflows into stock-based mutual funds, as individual investors regained some appetite for risk after shunning stocks for years. But the bullish tone has already started to fade.”

Bespoke Investment Group reports that a majority of stocks in the S&P are strongly in overbought territory with “90% of the stocks currently trading above their 50-day moving averages”. The highest reading they’ve seen over the last year.

The picture we are beginning to see is one in which investors are throwing caution to the wind and jumping in as those who felt they’ve missed the boat are beginning to chase the market higher. As stated by Art Hogan of Lazard Capital Markets, "If you look at sentiment coming out this week, you have much more of a shift, whether it's kicking or screaming or capitulation. The 'wait for a pullback buyer' has turned into 'the train is leaving the station buyer.'"

The VIX index currently trades around $12.59, its lowest level since 2007. The VIX, which is considered the investing fear gauge, rises when stocks are on a decline and falls when stocks are rising. Levels below 13 normally signify extreme market complacency and they are a well-tested indication that the market may be reaching a short term peak.

CNBC recently reported that the run up in the stock market will result in either a 20 percent correction or a more severe sell off at some point this year. Marc Faber, Managing Director of Marc Faber Ltd., sees two possible scenarios: “either a 20% correction and then a move higher, or a scenario that is similar to 1987 or 2000 when stocks rose strongly early in the year only to drop sharply.”

Thomas Lee, chief U.S. equity strategist at JPMorgan, commented that he sees a worst-case scenario for stocks. He argued that various factors could come in to trip up this rally: “it would be that we've got a bigger hit to consumer spending than expected or there's some adverse developments in Europe; or China doesn't sort of stabilize. I think that would set us up for a larger correction."

Accommodative monetary policy will underpin the market for some time to come, but a correction between 5% and 10% is a very real risk over the coming one to three months.

A 5-10% market correction, however, may be a healthy adjustment that keeps stocks from becoming inflated and reaching bubble status, which could in turn trigger a much bigger crash.

In fact, as reported by US News, “Bank of America and many other market watchers think any dips over the next few weeks could be a terrific buying opportunity. The economy will get back on track sooner or later, it may just have a few more detours to make before that happens.”

(By: Ogbe A. – MarketConsensus News Contributor)