The last two years have seen tremendous economic turmoil in the energy sector, with coal prices taking a big hit. Low prices for natural gas (a substitute for Coal) continues to reduce coal demand. The slowdown in the global economy is another factor impacting the coal industry and coal companies like Alpha Natural Resources (Stock: ANR).

As is apparent from the stock price chart above, ANR’s stock has performed poorly in the last 12 months, more so than its competitors Arch Coal (ACI) and CONSOL Energy (CNX). Investors in ANR would be wondering whether its time to bail out, or whether there is still some upside left by hanging on to their ANR holdings.

For the fiscal year ended Dec 31, 2012 ANR reported Total Revenue of $7.0B, which also included a full year's contribution from its June 2011 acquisition of Massey Energy.  This reduced total revenue by 2% from the $7.1B reported in 2011. Total 2011 revenue also included 7 months of revenue from the then newly acquired Massey company. Over a 5-year horizon, this is the first year that ANR's total revenue has declined year/year since 2008.

While investors reacted negatively to the decline in revenue, the decrease was largely the result of management's decision to pare down production of Met coal in a dwindling coal price environment. The decline in revenue, however, would have been much worse, had it not been off-set by an increased in the volume of the firm’s Eastern steam coal sales. Given the reality of pricing differentials between the various coal prices, analysts believe this was the most appropriate strategy to adopt.

The company shipped a total of 108.8M tons of coal during 2012, including Met, PRB and Eastern steam. This was a 2.35% increase from the 106.3M tons it shipped in the previous year. Even though this represents a slight improvement, the increased shipments come at a time of global slowdown in the demand for coal, and comparatively cheaper natural gas prices, which makes even this slight increase in coal shipments commendable.

The bottom line was that, despite a strategic (yet necessary) reduction in production operations, and judicious cost-cutting measures in both its Eastern and Western operations, the company reported a net loss of $2.4B, which translated to $11.06/diluted share. 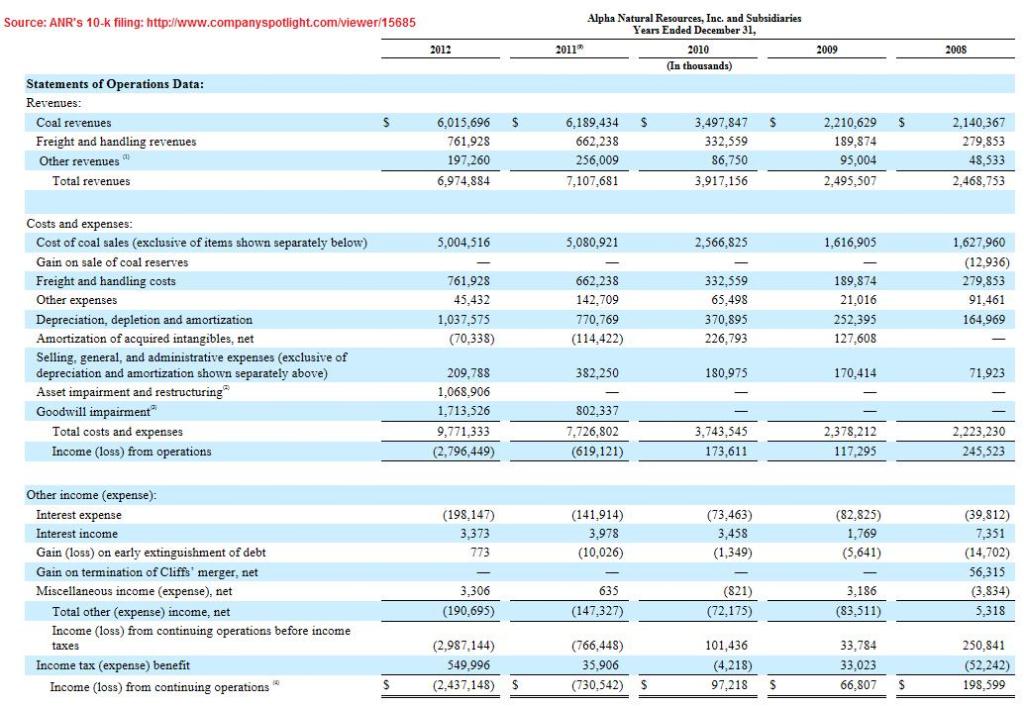 Looking at ANR's competitors, CNX trades at a staggering 19.8x its current Earnings, and at 10.6x its Cash Flow.  It also trades at 14.6x its Forward Earnings. On a comparable basis, ACI is trading at a -1.7x discount to its current Earnings, and 3.5x its current Cash Flow. However, its forward valuation, on a P/E basis, is a whopping 87.7x.  With ANR trading at -15.4x its forward Earnings, the stock seems to be relatively undervalued in comparison to its 2 industry peers.