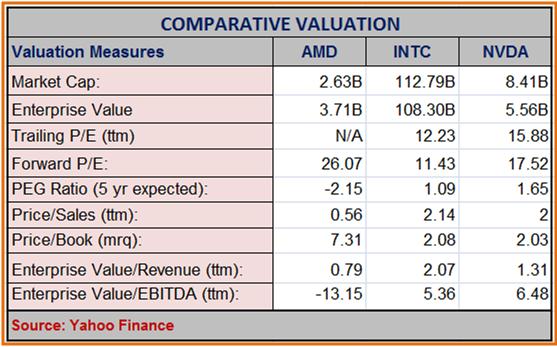 Should I buy AMD stock? Should I sell my AMD shares? These are some of the questions on a lot of investors’ minds today after the 80% surge in Advanced Micro Devices’ stock price between April and May of this year.

Looking at the current state of affairs, (including the surge in the share price and subsequent flat line and declining trend that followed the surge), AMD shareholders and potential investors in the company may be wondering whether AMD stock remains a Buy, Hold or Sell at these levels.

Let's take a closer look at the company's fundamentals, valuations and technical variables to try and answer these questions.

When AMD reported its Q2 2013 financial results on July 18th, it contained mixed news for investors. While the company reported yet another quarter of GAAP Operating Losses ($-29M), the losses were nearly 56% lower on a quarter-over-quarter (Q/Q) basis. And, although the reported $1.16B in Non-GAAP revenue was a 7% increase (Q/Q), it was down nearly 18% on a year-over-year (Y/Y) basis.

What impressed some stock analysts was the fact that, even although the PC market is currently experiencing severe headwinds, AMD was able to garner market share away from INTC. Improved chip sales for Desktops, Servers and Laptops increased the company’s revenue in its Computer Processor segment by 12% Q/Q. However, on the backs of lower than expected gaming royalties, the company's Graphics and Visual solutions business saw a sequential decline in revenue by 5%.

The company’s operating margin fell by 1% (to 40%) on a Q/Q basis, largely as a result of the sale of previously written off inventory.

Looking forward to Q3 2013, AMD's management is expecting to deliver revenue growth of between 19% and 25% sequentially. This optimistic forecast is largely predicated on a bright outlook for AMD's processors that will be used in the upcoming Sony PlayStation 4 and Microsoft Xbox One gaming consoles. The company's bottom line for Q3 is also expected to be buoyed by a number of restructuring activities, including reduction in head count, site consolidations, organizational restructuring and reduction in Operating Expenditure to the tune of 6% (Q/Q).

The above one year comparative stock price chart of AMD and its 2 other peers, Intel Corporation (INTC) and NVIDIA Corporation (NVDA), clearly shows AMD has struggled for most of the review period, only surging significantly recently on the announcement of its new "hUMA – heterogeneous Uniform Memory Access” architecture-based chips (more on this later).

However, AMD does not seem to have any of its 2003-2006 winning streaks, like when it gave INTC a run for its money by adding the likes of Dell Computers (DELL) to its client list. Sadly, AMD has fallen off its pinnacle (even losing DELL as a customer), ceding ground to its arch rival INTC once again. With a Market Cap (MC) valuation of $2.63B, AMD is the smallest of the three peers being compared in this comparative analysis. INTC, with a Market Cap of $112.79B towers AMD's MC by 4100%.

On a Forward P/E basis, AMD is trading at 26.07x forward earnings, which makes it the most expensive stock of the three. NVDA, trading at 17.52x Forward P/E, is the second most expensive amongst the peer group, with INTC (at 11.43x) valued as the cheapest of the group.

On a TTM Price/Sales basis, AMD appears to be the cheapest of the three peers, trading at 0.56x trailing sales, with INTC valued as the most expensive of the group (at 2.14x). NVDA, which trades slightly below INTC (at 2x) ranks mid-range on a TTM P/S valuation.

AMD also has a compelling (cheaper) TTM Enterprise Value/Revenue (EV/R) valuation, as it trades at 0.79x TTM revenue. On this valuation metric, INTC appears to be the most expensive of the group (at 2.07x), with NVDA (at 1.31x) in the middle.

During the first half of the year, AMD’s stock price moved along a flat line, until early May when the stock surged primarily on news of AMD's next generation “hUMA” technology. Given that this new chip architecture will take Playstations and XBoxes to a new level, investors believe it may turn the company's fortunes around.

Between April and May, the stock gained 84% in value, outperforming the S&P 500 in the process. The 'hUMA" euphoria was short-lived however, and the stock had a sharp pullback, and traded almost flat from June through early July.

The stock subsequently broke through support at its 50-day Simple Moving Average (SMA) on July 19th, and has traded below that level ever since. Over the past 10-trading sessions the stock has closed within a range of $3.65 and $3.80, ending lower on 6 occasions in that period, and losing 4.45% of its value.

Investors need to closely watch for signs of a further breakdown in AMD's price over the next few weeks. At $3.65, it currently sits just 10 cents above its 100-day SMA. If it were to breach support at those levels, the stock could be headed for lower lows.

AMD is in for a tough race against its main rival, INTC, which has deep pockets to spend on R&D. In addition, INTC's vast scale operations limit AMD’s ability to gain the upper hand in the tough global chip set market. AMD's decision to spin off its manufacturing operations in 2008 was strategically a good move, helping to shed losses and realign its focus on chip design (versus production).

However, the chip designer is now faced with being dependent on third parties in its battle against industry titan INTC. This strategic relationship doesn't allow AMD to have the same amount of control over production as it had prior to the spin off. As a result, challenges like a delay in its Kaveri Accelerated Processor Unit (APU) chip, in late July 2013, can prove to be a negative catalyst for the company's earnings. Similar production issues in Sept 2011 at partner Global-Foundries had restricted the delivery of some critically needed AMD chips.

On a positive note, AMD's Fusion processor, currently used in many desktops and laptop computers, appears to have a slight edge over INTC's comparable offering. The superior graphics capability of AMD's chip has given the company a technological advantage over its rival. While AMD is particularly vulnerable on this side of its business, its revamped Piledriver and Bulldozer architecture will offer Servers greater processing power compared to INTC's equivalent offering. While this slight advantage could be exploited to gain a greater advantage in future generations of these processors, AMD's poor track record of doing so has always been a negative catalyst for the company.

The gradual erosion of demand for traditional desktop computing solutions is yet another negative catalyst for AMD's future growth prospects. The company's recently announced Server strategy is clearly designed to give it an edge over INTC. Its Seattle, Berlin and Warsaw chips are based on ARM Holding (ARMH's) designs, and will give AMD a presence in the "microserver" market and the Cloud computing space.

Additionally, through its partnership with Microsoft and Sony, the company is also diversifying away from the laptop and PC segment by having its Jaguar chips embedded in next generation XBox and PlayStation gaming consoles. These diversification strategies could certainly be a favorable catalyst for AMD, but only if PlayStations and XBoxes are well received by gaming enthusiasts.

Must Read: 12 Best Banks to Bank with | No Fees | 3% High Yield Checking Accounts

Based on the above analysis, MarketConsensus rates AMD as a HOLD. If the company is able to demonstrate a few more quarters of solid earnings growth, as well as reports stabilization (and preferably an expansion) in market share, then AMD stock can rate as a BUY.