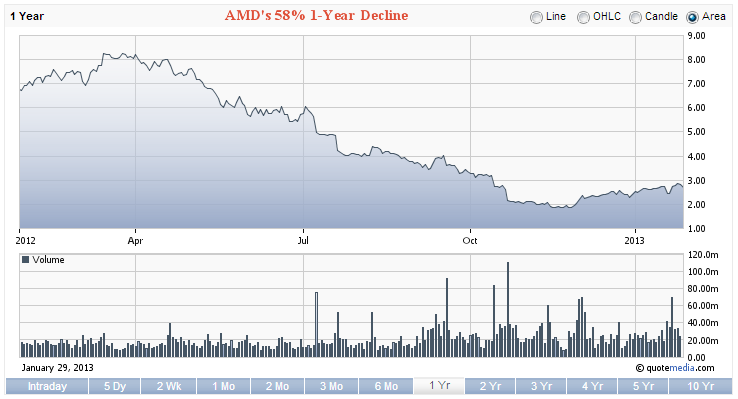 On January 22, 2013, Advanced Micro Devices CEO, Rory Read, announced to the world that the firm would be profitable in the second half of 2013. Read stated on the company’s conference call that AMD was undergoing a major restructuring of their business and operating models, which will allow the firm to turn around its declining prospects.

Wall Street seems to be taking a wait and see approach. But a lot of investors are asking: Is it possible for the company to turn itself around in time to avoid bankruptcy?

As reported by Zacks.com, "The company operates in a highly competitive market, which is being increasingly cannibalized by tablets from well-established players, such as Apple, Samsung, Microsoft , HP and Dell among others”. Compared to its peers, AMD has the most negative growth rates and profit margins. It has a -167.92% EPS growth (MRQ) compared to the industry average of -6.40%.

We do not see the stock as a BUY at this time. At best, we can rate it as a HOLD. We will continue monitoring the firm’s restructuring and transformational efforts and will most likely adjust our ratings based on any improvement on the company’s financial and operational prospects.