Apple vs. Google. But Wait, There is a Third Contender 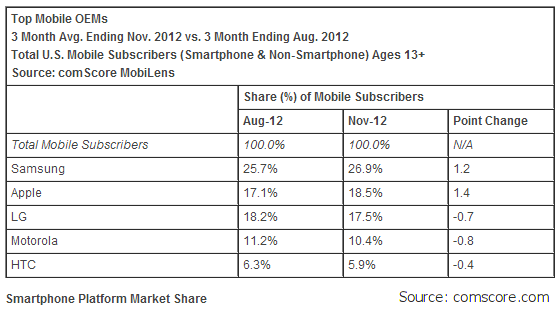 2013 is shaping up to be the year that users will likely see a decisive battle for third place in the burgeoning smart phone market place. For some time now, there has been no doubt that Android-based devices are king of the hill, while Apple is the undisputed crown prince.

A recent report by researcher Gartner confirms this trend, estimating that, as of Q3 2012, Android held its ground, accounting for over 72% of the mobile devices sold, while iOS-based devices accounted for almost 14% of the global market.

Other News: Why Investors Should Not Underestimate Nokia

According to Gartner, the gap between the number 1 and number 2 players has widened considerably from Q3 2011, when Android accounted for slightly more than half of the market (52.5%), with Apple accounting for 15%. Another research finding, by comScore Inc, shows that Samsung's Android devices continues to gain market share, up from 25.7% in August 2012 to 26.9% in November 2012.

ComScore’s research also confirms a slight increase in Apple's share of the pie during the same period – from 17.1% to 18.5%.  If these trends are true, clearly not much has changed to dislodge the two front runners from their respective seats at the table. However, the race for number 3 is very much on. The question is, who will be the crown prince in waiting?

IDC, in a report dated Dec 4th 2012, observed that in 2012 the mobile phone market will grow only by 1.4% year-over-year, while global smart phone volume will show a 39.5% increase, year-over-year.  The race to capture a bigger portion of that market share and finish third is taking place in a pretty crowded field. Big names like Research in Motion (RIM), Microsoft, Motorola, LG and HTC are all viable contenders for world #3 spot.

See Also: Google Stock Soars: Is GOOG a Bargain at $740 a Share?

While Samsung and Apple continue to grab market share from the beleaguered BlackBerry maker RIM, the Canadian company has still managed to hang on to its current number 3 position, with almost 4.7% of smart phones reportedly still using the BlackBerry OS. RIM's current (tentative) third place on the charts came despite seeing a nearly 50% decline in their user base since 2011.

Some would consider that a singular achievement in and of itself. However, with the September 2012 release of Windows 8 by Microsoft, the third spot is once again open to contest. It remains to be seen whether Windows 8 phones will gain traction for third spot, or whether RIM's much anticipated (and delayed!) BB10 devices will steal that honor.

Even though Android devices, led by Samsung and Nokia, and Apple iOS-based phones are still likely to dominate the U.S market in 2013, the battle for 3rd place may yet be determined outside the U.S.

Despite having lost significant U.S market share, RIM still remains a force to be reckoned with in other global markets, particularly in Southeast Asia and Africa.

In Indonesia, for instance, BlackBerry accounts for almost 50% of the handsets sold, while RIM is number 2 in the Philippines and still maintains third place in Thailand and Malaysia, giving it the overall number 3 spot in the world. However, with Nokia now selling its Windows 8-based Lumia 920 range of phones in some of those markets, the world number 3 spot might yet remain undecided for a while.