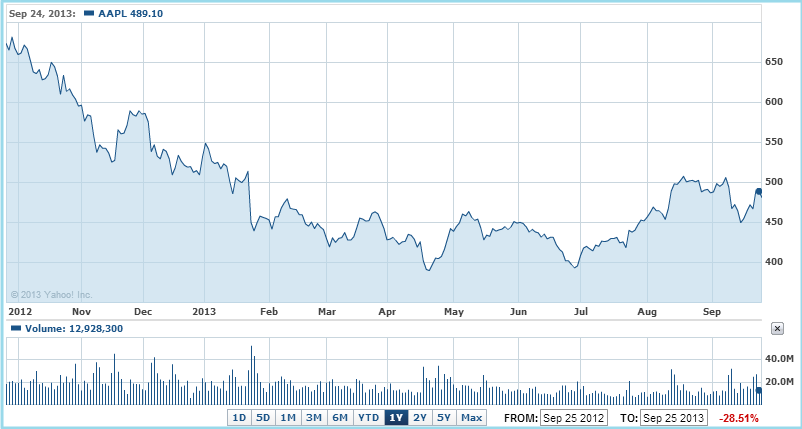 With the 28.51% correction in Apple’s stock price since Sept of last year, the stock (AAPL) is beginning to look like a great bargain for individual investors.

Apple’s stock has been on a downward spiral due to a number of factors, including fears surrounding the firm’s future prospect.

However, Apple still has a number of strengths, and its growth will likely continue.

Analysts predict that Apple’s revenue will increase to $191.58 billion. And even though iPhone sales were not as great as expected in recent months, an adjusted yearly growth of 25.1% is expected for 2013.

Google is one of the many challenges Apple has to face in coming months based on stiff competition from the Android platform.

This is of grave concern as more than 70% of Apple’s revenues come from iPad and iPhone sales.

Not only does Apple have to compete with the Android platform, but there are also many more tablets from different companies now on the market.

The tech industry is highly competitive, and Apple must continue its innovative practices to compete effectively with other firms like Amazon and Samsung. It also needs to focus on increasing iPhone sales in emerging markets around the world to continue its enormous success.

Nevertheless, Investors should still consider Apple as an investment choice – from a buy and hold perspective.

The stock has corrected from the “bubble like” level it found itself in early 2012.

It is a strong brand that has a large base of users and is establishing itself in emerging markets. Sales for its major products are also likely to experience growth in the coming months. Apple is a major company that will remain strong regardless of the recent setbacks it has encountered.