ArcelorMittal Stock Analysis – Is MT a Buy or Sell at the Current Price?

ArcelorMittal Stock Analysis – Is MT a Buy or Sell at the Current Price?

Looking at the stock performance chart above, we can see that, unlike Nucor (NUE), which has been able to turn a corner to the upside, ArcelorMittal and U.S. Steel have both moved in lock-step, trending downward since the beginning of 2013. As such, MT shareholders are right to wonder what the future holds for the stock, and whether they should hold on to their positions, sell or buy more of MT stock.

Let's review the fundamental and valuation picture for MT that might help answer these questions. 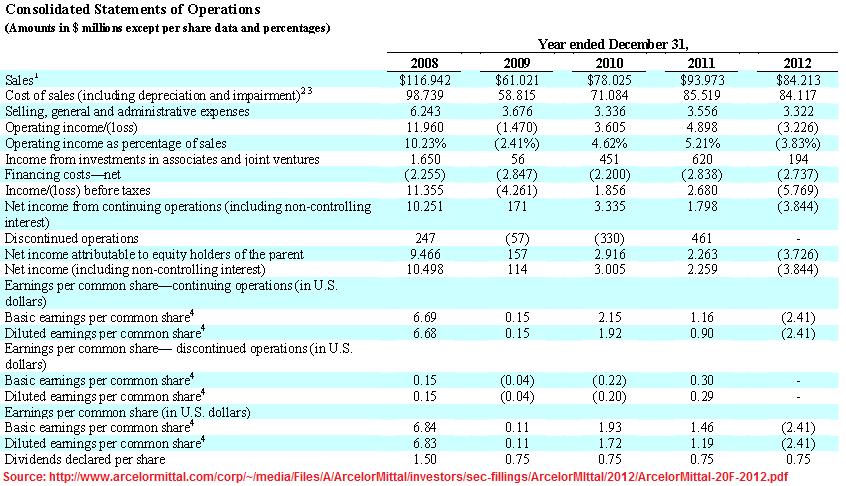 Ironically, after delivering three consecutive quarters of down-side earnings surprises, Analysts had pegged Q4-2012 to produce a loss of $2.78 per share. With a reported loss of (only) $2.41/share, MT surprised the analysts by delivering 13.30% better results than expected!

Shareholders were still rewarded with a $0.75 per share dividend, which would have to come from the company's Retained Earnings. Another bright spot of these results was the somewhat optimistic outlook for 2013 presented by management. They expect to deliver much better operating results next year, largely on the expectation of a 2% to 3% increase in the volume of steel shipments, a 20% increase in shipments of iron ore, and approximately $300M-$400M in cost cutting/saving and operational optimizations.

Since late March 2013, ArcelorMittal’s Stock has shown signs of a classic Death Cross, where short-term SMA's fall below their long-term counterparts, signalling a falling stock price. The stock has been on a steep decline, falling over 31%, from $17.75 on Jan 25th to $12.23 on Apr 8th.

The stock does not seem to hold on to support at any of its SMA's, and after breaking through its 50-day, 100-day and 200-day SMA in late Feb, seems to be in a free fall. From a shorter-term perspective, while trading within a price range of $11.87 and $15.26, MT has seen a -16.02% Rate Of Change (ROC) in its stock price in the past 30 days, confirming that it has experienced more down-side than up.

Unless the stock demonstrates its ability to hold on to, and press forward with, the gains it has seen in recent trading sessions, investors would be well advised to stay on the sidelines with MT.