Does AT&T Stock Offer a Buy, Sell or Hold Value Proposition for Investors?

After abandoning its $39B attempt at taking over/merging with T-Mobil in late 2011, it was clear that AT&T (NYSE: T) would need to continue its quest for more wireless spectrum to remain competitive. Since the deal fell through, the company been using its large cash hoard very accretively, buying up spectrum from other smaller competitors who aren't using them.

But as the share price chart of T (market cap $197.75B) and its close rivals Verizon and Sprint shows, highly profitable (in 2012) T's stock has been trading neck-in-neck with less profitable VZ, and significantly underperforming its loss-generating smaller market cap rival S.

Let's review some of the factors for this situation to see whether AT&T is a good Buy, Sell or Hold.

Overall, T ended 2012 with fairly positive numbers, and in the process was able to reward shareholders with its 29th consecutive annual dividend increase. Another high point for investors was the fact that, during the course of the year, the company was able to return $23B back to them in the form of buybacks and quarterly dividends. 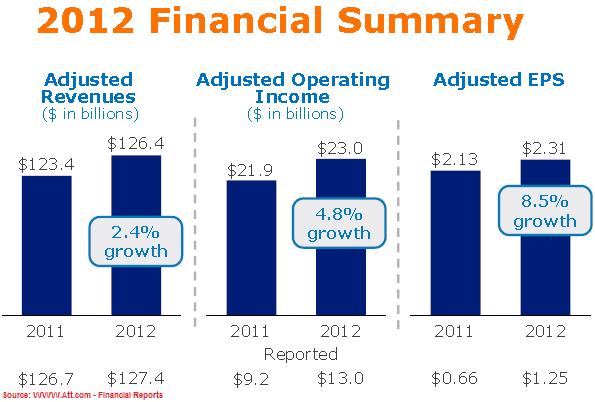 The company reported consolidated Operating Revenues of $127.4B, which was a 2.4% improvement (on an adjusted basis) over 2011. Both Adjusted Operating Income as well as Adjusted EPS also recorded increases over 2011, of 4.8% and 8.5% respectively.

On an individual line-of-business basis however, only Operating Revenues for the Wireless segment showed an improvement (+5.61%) over last year. Operating Revenues from Wireline (-0.95%), Advertising Solutions (-68.14%) and Other Businesses (-26.67%) reported declines from 2011. However, if there is a silver lining in these declining numbers, it may be the fact that in all three cases the declines were lower than those reported in 2011. This could either be an indication of a turnaround in those business segments, or may be the result of reducing Operating Expenses and increased cost control measures.

A point for concern to shareholders is the pressure that T is facing in growing its margins. Although both Wireless and Wireline  Adjusted Operating Income Margin has risen in 2012, the net margin improvement in both segments was less than one percentage each, with consolidated margins moving from 17.8% in 2011 to 18.2% in 2012. Wireline margins improved only slightly, from 11.9% in 2012 to 12.1% in 2012. This may be indicative of the fact that other less established players have entered the market, forcing giants like T and VZ to reduce their margins in order to fight customer erosions. 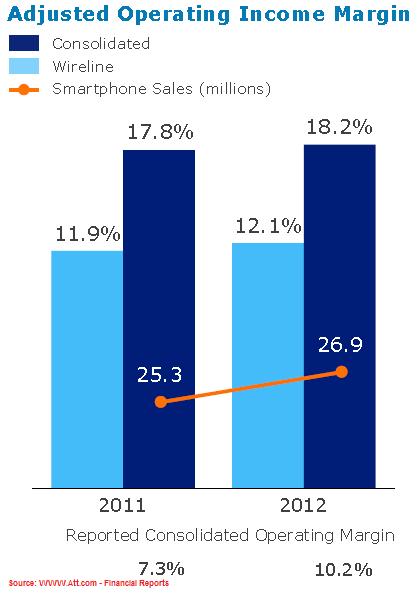 On the bright side, 2012 ended with T reporting 1.1M net adds for its Wireless segment, ending Q4 with a total wireless subscriber tally of 107.M users, a 3.8% YOY increase (from Q4-2011 tally of 103.2M). This was therefore the company's strongest Postpaid growth in 3 years. Another note of cheer for shareholders came in the form of a slight decline in postpaid churn (users abandoning AT&T) rates, which were down by 2-basis-points from same quarter last year.

And there was even more good news for investors, with the company reporting $39B in cash flow, which was up by 12.76% and 11.23% from 2011 and 2010 respectively. This bodes well for the company, as it may be able to weather any potential downturns in the economy much better than some of its competitors. The company has already indicated its intent to continue its share repurchase program, and will also likely deploy some of that cash for accretive purchases like additional wireless spectrum.

Even though AT&T, Sprint and Verizon have overlapping competing interests, because of its comparatively smaller size (in terms of market cap) and relatively short history as a publicly traded company (having gone public only in late 2012)  comparing S's valuation against giants like T and VZ may not be appropriate for our analysis. Let's therefore restrict our comparison to T versus VZ and the wireless industry in general. 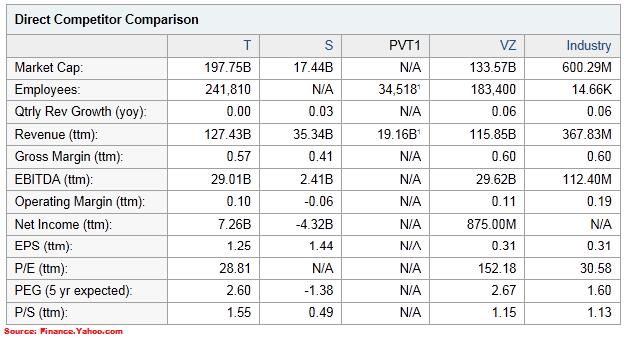 Based on data pooled from YahooFinance.com, it is clear that both T and VZ are valued at significant premiums to their stock prices (29x and 152x respectively) on a Price/Earning basis. While AT&T's P/E is almost in line with that of the U.S. domestic Telecom industry, VZ's P/E valuation is over 5 times higher than that of its competitor. On a TTM Price/Sales valuation basis, while VZ (at 1.15x) is valued closer to the industry average of 1.13x, with a TTM P/S valuation of 1.55x, AT&T's stock price isn't significantly overvalued either.

When looking at their valuation on a 5-year expected PEG basis, both T and VZ are comparably valued (at 2.60x and 2.67x respectively). However, it is clear that both peers are significantly overvalued compared to the industry average valuation of 1.60x.

Given that other performance metrics of these two rivals (e.g. TTM Gross Margins, TTM EBITDA and TTM Operating Margins) closely match each other's,  AT&T's TTM Net Income ($7.26B) would clearly justify its current valuation over Verizon (with a TTM Net Income of only $875M).

The stock did however find support at its 200-day SMA, at which it built a strong base until late 2013. Since late Jan 2013, the stock has once again been on the move, rising above its 50-day, 100-day and 200-day SMA values, providing strong technical indication that, barring any adverse headlines or fundamental issues, it may be about to breach the upper range of its 52-week range of $38.58.

Even though Apple (NASDAQ: AAPL) had non-exclusive distribution rights with the company, T was able to capitalize well on the iPhone 5 launch, with strong iPhone and tablet device sales. Its well entrenched relationships with long-standing customers serves as a strong catalyst for cross-selling and up-selling a number of its other offerings. Still, the company is overly reliant on the iPhone, with over 40% of AT&T's retail revenue coming from iPhone device users. New device releases mean that T will need to heavily subsidize the iPhone line in order to maintain this source of revenue.

The company's massive cap-ex spending over the last few years, notably in building and promoting its U-Verse brand of Internet, Voice and TV services, is already paying off. The company is already the largest high-speed internet provider in the U.S. Even though it may reduce its investment momentum in this area in the coming years, the investment already made is likely to serve as a catalyst for forward growth.

One very important long-term catalyst for T's growth is that, unlike its major competitor VZ, T has controlling ownership in all of its wireless subsidiaries. This makes it much easier for T to develop, and quicker to implement, growth strategies in major wireless business segments. Often, first-mover advantage can be had if organizations are nimble to grab market opportunities.

A major negative catalyst for T's growth prospects could come in the form of unknown impacts that the U.S. sequestration challenges may have on consumer sentiment. A significant number of AT&T's customers are on Shared data or Family plans, which bodes well for "assured revenue" during good times. However, in an economic downturn, consumers may curtail their spending on such plans, further reducing T's growth prospects. However, the company's strong cash flow and cash balances are will likely help it to weather any short-term downturn in the economy.

Based on the above analysis, T rates as a MODERATE BUY. Two factors impacting this rating are the unknown impact that sequestration will have on the wireless/telecom sector, and how VZ and other AT&T competitors might react to those challenges.

MarketConsensus would, however, like to caution investors on what we see as an imminent market correction. Market trend indicators are pointing to an overbought situation and a correction is a very real risk over the next 1-3 months. Investors should take this into consideration in their near term investing choices.