Is Bank of America stock still a good buy or should investors sell the stock and seek opportunities elsewhere? BAC seems to be on a rebound from the dark days of the financial crisis of 2008, as it reported yet another positive quarterly result. For its Q2 2013 financial results, Bank of America reported a staggering $4B in Net Income, up 63% on a Year to Year (Y/Y) basis, and a stunning 170% rise Quarter over Quarter (Q/Q). For the last one year alone, the stock has surged by 78.55% and continues to rise. Given this situation, investors and prospective buyers of BAC might be wondering whether Bank of America stock offers a good investment opportunity, or whether shareholders should sell BAC stock and look elsewhere for better bargains.

Let's analyze the various fundamental, valuation and technical views to determine whether BAC stock rates as a good buy, sell or hold. 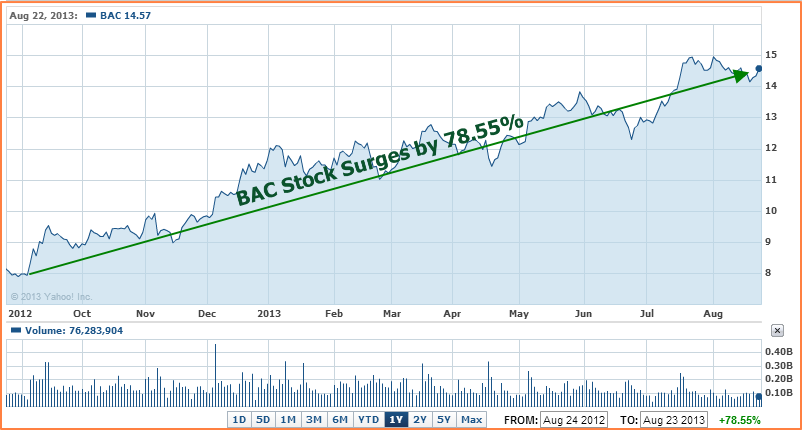 It does appear that the turnaround initiative launched by BofA in 2011, with an ambitious target of cutting $8 Billion a year in operating costs, might be paying off. While both of its competitors, JP Morgan Chase (JPM) and Citigroup (C), reported an increase in their operating expenses, BAC reduced non-interest expenses both on a sequential quarter as well as on a year-over-year basis.

However, BAC is not in the clear yet, as some work still needs to be done to get the ailing bank back to its former glory days, especially on the mortgage lending front. The increase in the firm’s net income as reported in the second quarter was largely due to an aggressive cost-cutting program that CEO Brian Moynihan put in place starting in 2011.

As part of its ongoing restructuring, the company expects to cut an additional $3B in costs over the next two quarters. In Q2, the company cut its operating expenses from $17.05B to $16.02B on a Y/Y basis. However, the income picture was rather mixed across various lines of business, falling almost 1% in Consumer & Small Banking, rising in the Retail Brokerage & Asset management and Investment Banking business, but declining sharply (almost 16%) in the Consumer Real Estate Services business.

Despite the soaring Q2 net income figures, the bank did suffer some big losses on its "available for sale portfolio" of investments, largely due to declining bond markets. This event caused a dent of $4B+ to BAC's balance sheet, which resulted in the bank's net worth declining by nearly 3% (from $237.29B to $231.03B) Q/Q. Most of BAC's competitors saw this metric improve in their latest quarter on a Q/Q basis.

Rising bond yields also took a toll on the firm’s Fixed Income, Commodities and Currency (FICC) unit with revenue dropping $300M, down to $2.3B. However, the decline in bond sales and trading revenue was offset by a 53% rise in equities sales and trading.

According to Thomson Reuters Institutional Brokers Estimate System (I/B/E/S), analysts were estimating that Bank of America would earn 25 cents per diluted share for Q2. BAC, however, surprised Wall Street by beating the market consensus and delivering EPS (diluted) of 32 cents. As a sign of confidence in the bank's reported earnings, BAC stock traded 3.3% higher on the day of its earnings release, hitting $14.38 (a high not seen since Q1 2011).

At the time of this analysis, BAC is valued at a Market Cap of approximately $160B, which is roughly the same as the valuation of Citi (C), but almost 25% smaller than J.P. Morgan (JPM). The stock is trading at a P/E multiple of 46x its Trailing 12-month earnings, which makes it almost 400% more expensive than JPM (9.39x) and 140% more expensive than C (19.25x). On a forward P/E basis though, while both JPM and C are valued at roughly the same multiple (9.24x and 9.45x respectively), BAC's 11.01x valuation is not entirely that expensive (compared to its two peers).

When CEO Brian Moynihan unveiled his turnaround plans, he noted that an ambitious cost-cutting program was central to the firm’s restructuring strategy. In the Q2 2013 earnings conference call, the company reported that it was ahead of its schedule to reaching its overall cost-cutting target. This could be a favorable catalyst for future earnings.

Other News: Is Nokia Stock a Buy or Sell? NOK Stock Valuation Analysis

As is apparent from declining Bond trading revenues in the firm’s Q2 financial report, rising bond yields are a definite negative catalyst to the bank's earnings. From the various subtle (and sometimes overt) signals being beamed by the Federal Reserve Bank, it does seem like a tapering of the stimulus program will be happening in the near future. Rising interest rates will act as positive catalysts for Bank of America’s Credit and Lending business segment.

There is clear evidence that the U.S. housing sector is on a rebound. As more Retail and Institutional home-loan borrowers wade back into the mortgage market, it could serve as a positive catalyst to strengthen this one weak area in Bank of America’s operations.

The mortgage crisis has certainly put a damper on BofA’s earnings, profitability and growth ever since 2008, when the company acquired mortgage lender Countrywide Financial during the pinnacle of the mortgage crisis. However, continued litigation and settlement of bad Countrywide debts has caused BAC to pay out over $40B since then. Any further such missteps by management could prove to be extremely negative for the bank's financial picture. Tighter regulatory framework around the making of such decisions, however, bodes well for the bank's future.

One bright note for the bank's future seems to be the fact that it appears on track to move beyond the crux of its bad mortgage deals. The company expects to reduce its expenses for servicing bad mortgages to under $2B in Q4 2013, down from the $2.3B it paid in Q2. If that happens, it will definitely be a positive signal that the bank is now ready to put some of the darkest moments of its history behind it.

Based on the above analysis, MarketConsensus continues to rate Bank of America stock (BAC) as a MODERATE BUY.