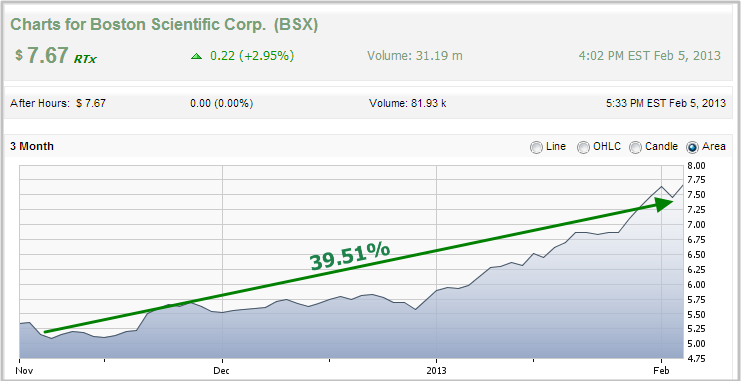 On Jan. 29, 2013, the firm reported Q4 2012 sales figures that beat Wall Street analysts’ estimates and announced that revenue for all of 2013 could beat forecasts. However, despite the good news from the firm’s management, the company still faces a long road ahead as it works to restructure its business. It continues to face mounting pressures from multiple operational, financial and competitive factors.

Although it reported better than expected Q4 2012 sales, the company still had a 2012 “full year” net income loss of -$4.07 billion (net income = sales minus expenses and taxes). Stock analysts do not see many prospects in 2013 for the company and continue to reiterate negative ratings on the stock. TheStreet.com rates the stock a sell, stating that “the company's weaknesses can be seen in multiple areas, such as its deteriorating net income, disappointing return on equity and weak operating cash flow”.

Taking BSX’s shaky prospects and also the firm’s restructuring efforts to turn itself around, investors are asking: Is Boston Scientific’s stock (BSX) a buy, sell or hold at current prices?

Boston Scientific is a worldwide manufacturer of medical devices used to treat a wide range of medical conditions, including heart, digestive, cardiology, gastroenterology, pulmonary, and chronic pain conditions. With 24,000 employees worldwide, the firm operates in over 40 countries.

BSX has total cash of $207 million, which is not enough to cover its $4.26 billion of total debt. However, the company has a debt to total capital ratio of 38.25%, which is consistent with other companies in the Medical Equipment and Supplies industry. It has an Interest Coverage ratio of 1.8 (this ratio determines how easily a firm can continue to pay interest on its debt). A ratio of 1.8 means BSX has more than enough capital to continue paying short term interest on its debt without running into financial difficulties.

The firm’s quarterly earnings growth is declining at a year over year rate of -43.9%. It has a Return on Equity (ROE) of -44%, but shows a positive Return on Assets (ROA) of 3.12%. ROE and ROA are variables used by investors to determine management effectiveness. For each $1 of equity, BSX’s management is losing $0.44, and for each $1 of asset, management is earning a low return of $0.031

Boston Scientific ‘s MACD – Moving Average Convergence Divergence (technical analysis indicator used to identify changes in a stock's strength, direction and duration) is showing a Bullish sentiment with a 1.22% change. It has a 50-day Raw Stochastics of 68.19, which is considered Strongly Bullish. Overall short and long term technical analysis shows a bullish trend for the stock.

Key factors that can help support BSX’s stock in 2013 include a possible success in the company’s transformational efforts. As reported on the company’s latest financial report, management has “approved an expansion of the company's restructuring program, which is expected to reduce gross annual pre-tax operating expenses by an incremental $100 million to $115 million exiting 2013”.

Mike Mahoney, President and CEO of the firm stated that: "We are pleased but not satisfied with our improved performance in the quarter. We continued to enhance our growth portfolio, expand in the emerging markets, and implement operational changes to improve our execution and sharpen our customer focus.  I am confident we are taking the critical steps that are needed to return our company to long-term growth”.

Taking the various fundamental, valuation, technical and other analyses into consideration, we believe Boston Scientific’s stock has great value if management is able to successfully transform the company.

MarketConsensus would, however, like to caution investors on what we see as an imminent market correction. Market trend indicators are pointing to an overbought situation in the stock market and a correction is a very real risk over the next 1-3 months. Investors should take this into consideration in their near term investing choices.