BranchOut Now Rivals LinkedIn – The Story of How it Began

Two years after its launch and with almost 25 million users, BranchOut is one of Facebook’s most popular application that even rivals LinkedIn, another popular professional networking site.

Founder and CEO Rick Marini launched BranchOut in July of 2010 after realizing how difficult it was to search for professional contacts on Facebook. Rick had received a call from a friend asking if any of his connections worked at a particular company. Rick thought he knew of someone but only vaguely. He tried searching through his vast list of Facebook friends but gave up and asked someone with coding skills to create a widget to accomplish the task. From there BranchOut was launched.

As of April 2012, the company has raised $45M of Series A, B and C funding from companies like Accel Partners, Norwest Ventures Partners and Floodgate. BranchOut also received funding from founders and executives at WordPress, Google and Facebook. 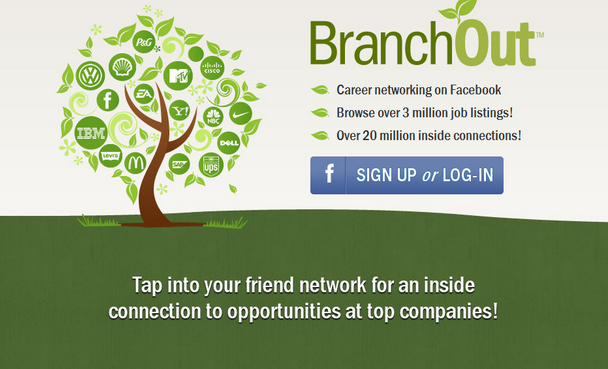 This Facebook application is designed to help users find jobs as well as grow their professional networks much like LinkedIn. It started with a meager user base of 10,000 individuals and grew into a massive network of 25 million users, thus becoming the largest professional networking service in Facebook.

Since 2011, the application has been able to list over 3 million jobs. BranchOut is active in 60 countries and available in 15 different languages. In November 2010, BranchOut launched its first mobile application which now accounts for about 45% of its traffic.

So how does BranchOut work? Since it is an application on Facebook, the users can create their very own professional profiles that include their work history as well as education while all other personal information is omitted. As soon as the app is installed, the corporate relationships of the user are displayed on the dashboard.

BranchOut has different products which help both recruiters and job seekers alike. The massive database of this application allows recruiters to search for possible job candidates through Facebook’s network.

This application received great reviews from The Wall Street Journal, CNET, Washington Post, ABC News and USA Today to name a few. It was awarded a "FASTech50" title for its innovativeness and was named the top human resource product for 2011.