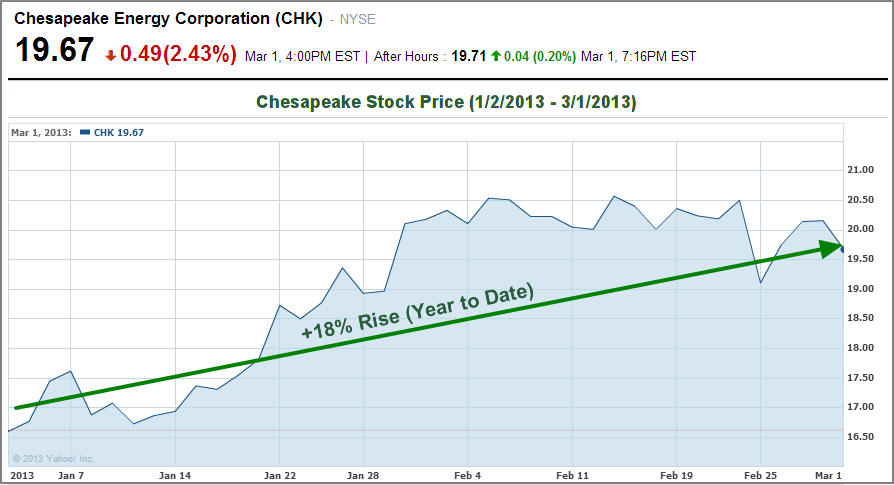 Does the Recent Decline in CHK’s Stock Price Present a Buying Opportunity? (Is Chesapeake Energy stock (CHK) a Buy, Sell or Hold?)

On Friday, March 1, 2013, Chesapeake stock fell 2.43% to end the day at $19.67 based on news that the SEC has escalated its investigation into the company. CHK and its CEO, Aubrey McClendon, are under investigation over a perk that granted McClendron a stake in the firm’s natural gas wells. “The investigation comes nine days after Chesapeake announced that an internal inquiry into the well program and Mr. McClendon’s finances revealed no “intentional” wrongdoing by the executive”.

Despite the 2.43% decline on Friday, Chesapeake stock price has risen over 18% since the beginning of the year – which is causing a lot of investors to ask: Will CHK continue its rise in 2013? Is CHK a Buy, Sell or Hold?

Chesapeake is involved in the exploration and production of natural gas and oil properties. It is the 2nd largest producer of natural gas and the most active driller of new wells in America. Chesapeake owns leading positions in the Eagle Ford, Utica, Granite Wash, Cleveland, Tonkawa, Mississippi Lime and Niobrara unconventional liquids basins.

On February 21, 2013, Chesapeake reported Q4 financial numbers and also its full year 2012 financial figures. Looking at the below screenshot of CHK’s consolidated income statement, two elements immediately jump out at you:

B. Decrease in Net Income: The second observation can be seen on the “Income (Loss) Before Income Taxes” row (also highlighted with a red dotted border). Here we notice that income before taxes (revenue minus all costs) declined by -29.5% from 2011: (563-799)/799. This decline in income definitely supports those who argue that CHK stock is a sell or a short in 2013. 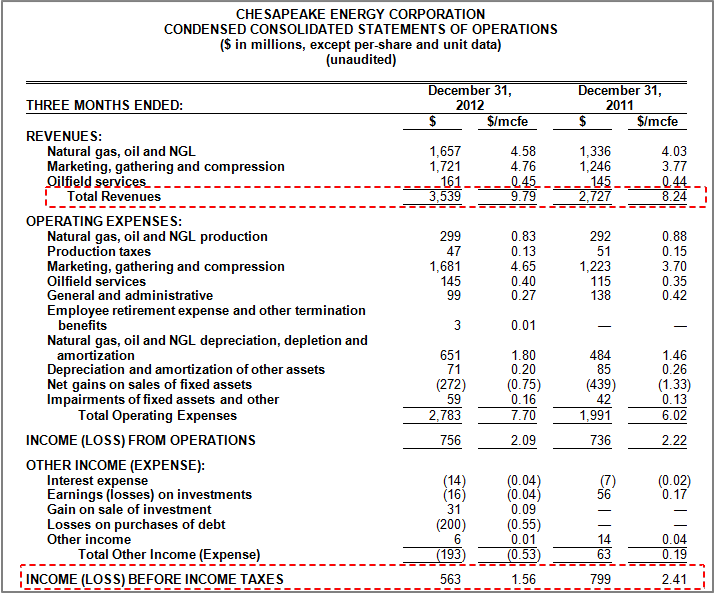 When determining the value of a stock, investors normally consider some distinct variables in their valuation analysis. These include a firm's financial margins, management effectiveness, growth rates, return on investments and other valuation matrix (EPS, P/E, Debt Ratio, Etc.)