Citigroup Turns its Business Around. Is the Stock (C) a Buy/Sell/Hold?

As a key actor in the "Too Big To Fail" saga, Citigroup Inc. (NYSE: C) was one of the recipients of a government approved, taxpayer funded bailout at the height of the infamous financial crises. Now under new leadership, Citigroup (C) has taken many bold steps to shed itself of the image of a "failed star", including ruthless cost cutting, divesture of non-core assets and consolidations and scaling down of less productive operations globally.  The bank was leveraged over 50-times tangible assets during the crisis. The renewed "back to the basics" focus has allowed the bank to strengthen its balance sheet and bring it into compliance with Basel Tier 1 requirements.

Given the apparent recovery of its share prices, as shown in the graph above, and its relatively better performance against its main competitors, JP Morgan Chase & Co (NYSE: JPM) and HBC Holdings Plc (NYSE: HBC), shareholders might be wondering whether finally, the worst is behind C.

Let's take a look at whether C offers a Buy, Sell or Hold value proposition for investors, especially in light of its 2012 financial results. 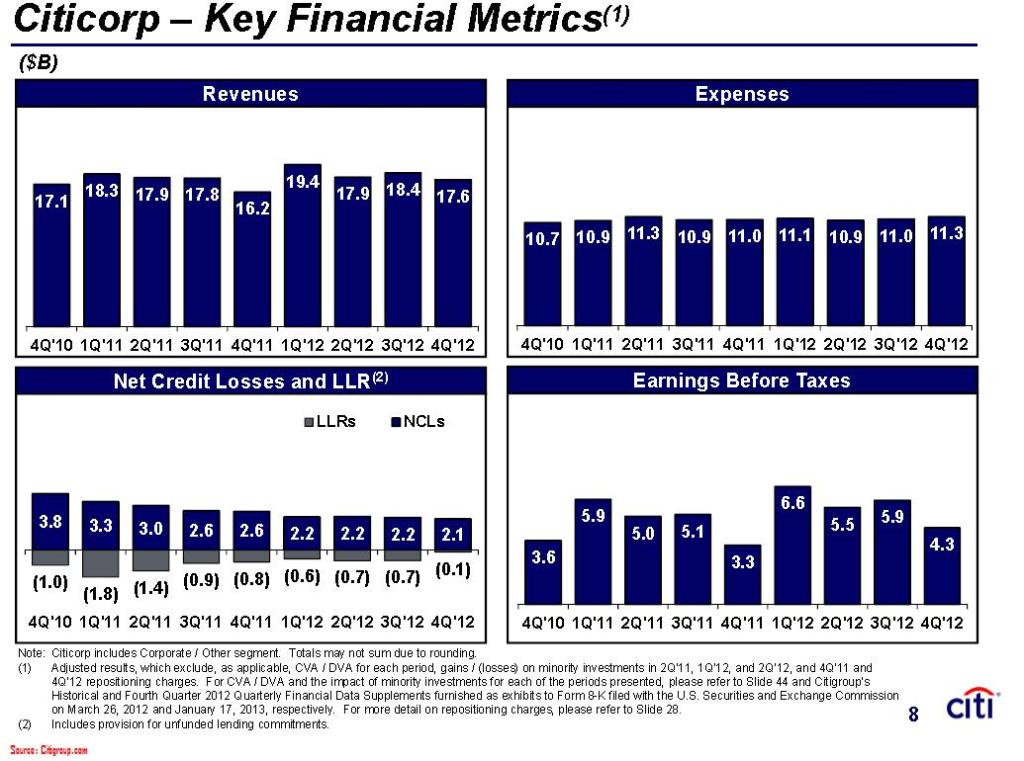 C's management has been working hard to purge the company's balance sheet of some of the toxic Citi Holdings' assets that the bank had accumulated over the years, and have now manage to trim those to account for roughly only 8% of the company's assets.  As of Q4-2012, Citi's balance sheet has a Basel I Tier 1 Common ratio of 12.7%, and the firm has increased its Basel III Tier 1 Common Ratio to an estimated 8.7%. This means there's more liquidity within its balance sheet, bringing it more in line with many of its peers.

Citi Holdings assets saw a decline of 9% during the quarter, for a total reduction of 31% during the year. However, Q4-2012 saw C take a $1B hit to its bottom line, and a $3.7B total loss for the year, largely because of such assets.

New management is doing a great job of trying to cut costs in order to attempt a company turn around. However, shareholders would likely look at the $400M reduction in operating expenses during 2012 as doing too little on this score. Clearly, if management wants to improve the fundamental value of the company, a lot more operational efficiencies need to be introduced, some would argue.

Even though the overall financial results were a disappointment, the Bank did see some rays of sunlight, such as the diversity of its earnings base. While earnings from Transaction services has remained steady through the 4 quarters at roughly $5B, both Securities & Banking and Global Consumer Banking have been seeing steady improvements. The company even reported a double-digit growth in its Latin American consumer banking sector.

Morningstar analysis of key valuation metrics for C and some of its competition (JPM and HBC) show that on a TTM P/E multiple basis, the company trades below the industry average but higher than those of both of its competitors. On a P/B and TTM P/S valuation basis, C and JPM both trade close to the industry averages at 0.8 and 2 times. Looking at C's 3-Year Average Revenue Growth as a valuation indicator, one could take comfort knowing that it trades close to the Industry's average of 15x, which is almost close to JPM's valuation in that respect. Where C lags significantly behind in valuation is its TTM ROE, which at 4.0 is well below that of the Industry Average of 6.7, and significantly below that of JPM (9.8) and HBC (7.8). Clearly C's new management has its work cut out for them to get their house in order and start returning value to shareholders.

One of the primary overhangs to Citigroup's fair valuation over the next few years will be the continued drag that City Holdings' (toxic) assets will have on any global growth initiatives. Still, with signs of improvement in the U.S. economy, and hopeful signals that Europe has not been as badly devastated by its crises as analysts had earlier expected, Citigroup should be able to reclaim its pre-financial crises fair valuation.

The chart (first one) above shows an extremely encouraging picture of a stock that has been steadily trending upwards, for the most part, from mid 2012 and through most of 2013. Even the slight pullback in late Feb 2013 has not been a significant technical hurdle, as the stock briefly fell below its 50-day Simple Moving Average (SMA) support.

The fact that C is once more on the uptick, finding support at its 50-day SMA ($41.92) is an encouraging technical indicator of strength. Investors might do well to watch for any development that sees the stock breach the 50-day or 100-day SMA on a downward move. Should that happen, and it could potentially do so in the wake of the upcoming U.S. budget cut/sequester issues or other global crises (political instability in Italy, for instance), it is likely that the stock may go into a tail spin and make new lows.