As seen in the share price chart below, CLWR's shares have enjoyed a significant upward run since late 2012 – compared to its larger peers, AT&T Inc (T) and  Verizon Communications Inc (VZ).

Clearwire Stock was a laggard from early 2012 until August when rumours and news of a possible takeout/takeover spurred new life into it. Shareholders would therefore be interested in understanding what makes CLWR tick, and whether it is a good Buy, Hold or Sell candidate.

Let's review some key fundamental, valuation and technical data for CLWR that might help answer whether Clearwire Corporation (CLWR) stock is a good Buy, Sell or Hold. 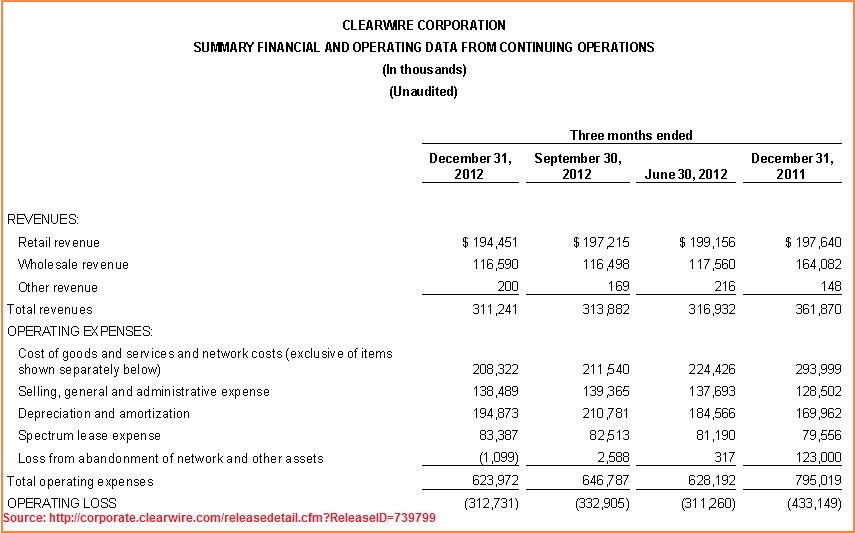 Despite the billions of dollars in revenue, Clearwire continues to record an Operating Loss, reporting a loss of $313M for the 4th quarter ended Dec 2012. This could be interpreted as a good sign when compared to the $333M loss from the last quarter, and a $433M Operating Loss reported in the same quarter last year.  However, on a full-year basis, CLWR reported a significant (42.34%) decline in Operating Loss, from $2.4B in 2011 to $1.4B in 2012.

Looking back 5 years, 2012 marks the 5th consecutive year that CLWR has returned a loss to its shareholders. More concerning for investors is the fact that the company ended Q4 2012 with a total subscriber tally of 9.6M users, down a significant 8% from the 10.4M it had on the books at the end of Q4 2011. A significant portion of that hit came from Sprint discontinuing its WiMAX service offering, which shows how vital the Sprint-Clearwire partnership is.

Another note of concern for shareholders is the company's Average Revenue Per User (ARPU), a key measure of effectiveness and profitability for network providers, which was down from $47.04 per user in 2011 to $45.51 per user at the end of 2012, a 3.25% decline.

(Other News: Does AT&T Stock Offer a Buy, Sell or Hold Value Proposition for Investors?)

Based on Morningstar data, CLWR trades at a premium of 6.0x its Book Value, compared to P/B multiples of 1.8x and 2.3x for the Industry and the S&P 500 index respectively. This valuation (6.0x) is almost twice that of CLWR's 5-year average for this metric.

With a Price/Earnings ratio of negative 2.6x, the stock trades at a significant discount to the Industry (42.0x) and the S&P 500 (16.6x). The stock is also trading at negative 10.2x its Cash Flow, which means it is trading at a discount when valued on a Price/Cash Flow basis against the Industry (4.6x) and the S&P 500 (9.7x). Neither of those two valuation metrics should surprise readers since the company has been on a loss making spree for the last several years.

The stock has been trending downward since April 2012, but launched a rally in late July when it reported decent Q2-2012 results, causing the stock to break resistance at its 50-day, 100-day and 200-day Simple Moving Averages (SMAs).

(See Also: Citigroup Turns its Business Around. Is the Stock (C) a Buy/Sell/Hold?)

The stock has followed a pattern of moving sideways for a period of time (building a base) and then surgnig upwards, largely based on earnings announcements or other news. Over the last 6 months or so, the stock has had several large upward moves based on speculations and news surrounding takeover and financing deals with various parties, notably Sprint.

The most attractive component of CLWR is its portfolio of wireless and broadband spectrum that it holds. Its next-gen network covers over a third of the United States. The company also owns a sizable portion of the country's deep spectrum bandwidth, overshadowing inventory owned even by behemoths like VZ and T.

The strong support that CLWR enjoyed from network and cable giants like Time Warner Cable, Sprint and Comcast, and its enviable portfolio of wireless spectrum, were two positive catalysts that could prove to be game changing for the company's future. However, as some of these partnerships have now come under strain, the company is finding itself in an extremely difficult position.

The ongoing battle, between Sprint, Crest Financial Limited and other parties, to gain control of CLWR, could be a distraction for the company in the near to intermediate term. While Sprint indicated late last year that it had reached a definitive agreement with the company on an acquisition deal, Crest Financial proposed an alternate offer on April 3 2013 that might further complicate the chances of an early settlement.  This uncertainty could prove a negative catalyst for the company to focus on delivering shareholder value.

The company, with its attractive deep spectrum assets worth an estimated $20B in market value, is very clearly an attractive takeover candidate for a number of big players in the cable and wireless industry. If used strategically, either for its own consumption or as a point of negotiation during merger/acquisition talks, these assets alone could provide the company with a competitive advantage for future growth in the LTE market. The fact that CLWR is a company up for sale could therefore be a positive catalyst for shareholder value.

As a result of the above analysis, Clearwire Corporation (CLWR) rates as a HOLD, with analysts estimating a 12-month mean target price of $3.34. Investors will however need to closely watch for two catalysts: Earnings reports over the next few quarters, and progress made on a final deal to sell/merge the company. A positive (or negative) outcome for either or both of those events could change the investment thesis from Hold to MODERATE BUY (or SELL).