The Food and Beverage industry is a highly competitive one, and is much more dependent on consumer discretionary spending than many other industries into which shareholders could divert potential investment dollars.

A look at the stock price movement chart below, comparing Coca-Cola (KO) against industry peers Dr. Pepper Snapple Group (DPS) and Pepsico (PEP) indicates trend lines that are moving more or less in lock-step, with PEP a clear winner for most of 2013, and KO the most depressed of the three stocks over the past year. 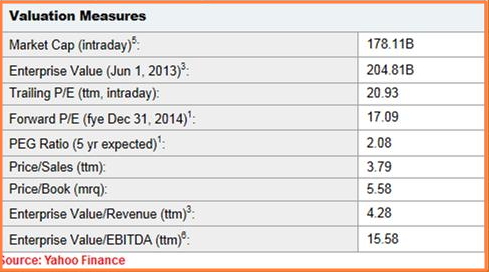 The biggest favorable catalyst that KO has going in its favor is its solid portfolio of brands and the company's vast world-wide network of distributors that has allowed it to dominate the non-alcoholic beverage market in over 200 countries.

Despite that, a growing consciousness in the developed world (especially in the U.S. and parts of Europe) over the unfavorable health effects of over consuming carbonated drinks could cause a dampening impact on profits from these markets. These headwinds are however more than compensated for by longer-term prospects of increased consumption in many of its other international markets.