Does the FRB Findings Present a Buy or Sell Opportunity for MS Stock?

Does the FRB Findings Present a Buy Opportunity for Morgan Stanley Stock?

At long last, the Federal Reserve Board of Governors (FRB) has announced the findings from its 2013 Comprehensive Capital Analysis and Review. This is great news for Morgan Stanley (NYSE: MS). As part of its review, the Fed approved Morgan Stanley’s Capital Plan. More specifically, part of the approved plan was a proposal for MS to acquire the remaining interest in the Wealth Management business of Morgan Stanley Smith Barney, which could provide a boost to MS's future revenue earning potentials.

Let's review some of the key stock valuation analysis and data for MS that might help answer that question.

Morgan Stanley (NYSE: MS) reported Q4 and full-year 2012 results on January 18th 2012. Of note for shareholders were a couple of reversals that these results represent. 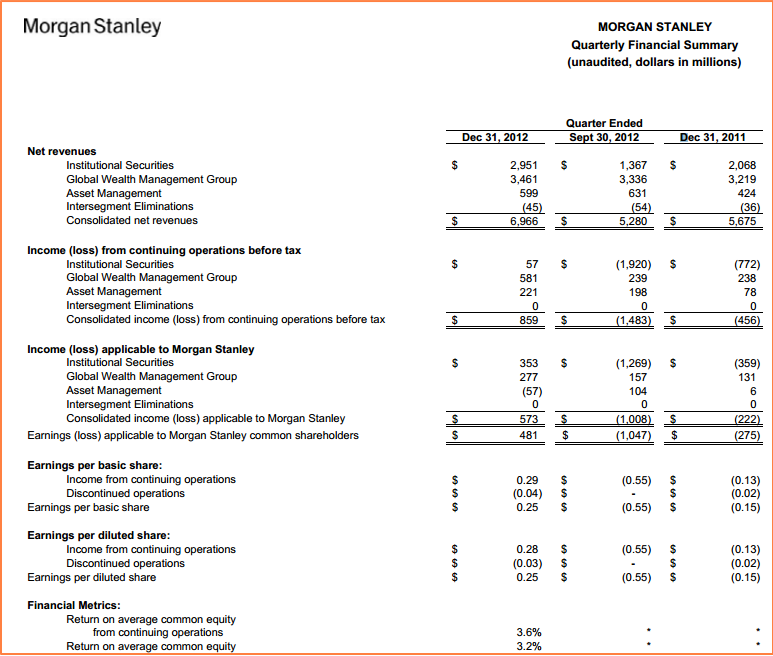 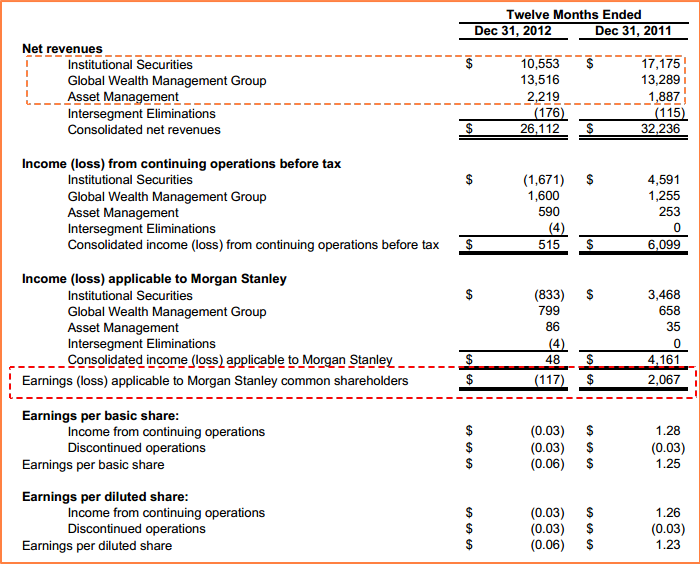 At the time of this analysis, MS appears to be trading at a slightly lower valuation on most metric when compared to the Industry Average and the S&P 500. When looked at on a Price/Book valuation (0.7x), the stock trades at a slight discount than both the Industry and the S&P index. Competitor Goldman Sachs Group Inc (NYSE: GS) and JP Morgan Chase & Co (NYSE: JPM) are trading at slightly higher P/B valuations (at 1.0x) than MS.

Overall, MS is also trading at a fair value compared to its 5-year average for the major valuation metrics. However, shareholders should take note that MS offers a much lower Dividend Yield (0.9%) than the Industry (1.2%) and the S&P (2.3%). Even competitors GS (1.3%) and JPM (2.4%) offer a better dividend value proposition.

From the chart above, we can see that the stock has executed the classic Golden Cross manuver, where shorter-term Simple Moving Averages (SMAs) rise above their longer-term ones. This has happended on at least two occasions during the past 52-weeks. In November of 2012, the stock found support at its 200-day Simple Moving Average (SMA), and used it to move higher.

Over the past few sessions, the stock has tested its 50-day SMA of $22.54, but has not stayed below it for long. For most of March 2013, the stock seems to be building a base at its current levels. This is a good technical indicator that MS may have found support at these levels and is poised to move even higher. Investors should pay close attention to whether the stock is able to hold on to its current momentum, especially in the wake of the ongoing US financial crunch. Should the stock fall through its 50-day SMA support, the next milestone will likely be to see if it drops below its 100-day SMA of $20.03.

As the US economy recovers, corporate mergers and acquisitions is beginning to pick up, as is other corporate investment activity, providing opportunities for MS's Investment Banking operations to grow further.

MS's expansion of its Wealth Management business is definitely a positive. As stock prices continue to surge and clients see their asset values improve, they are likely to offer MS additional wealth management opportunities, which will result in higher fee income.

While receiving Fed approval for its Capital planis a positive sign, the financial industry, especially trading and investment banking, is still living under a cloud of regulatory uncertainty. Increasing liquidity requirements, restrictions on trading and investment banking activity, or additional reporting and oversight requirements by the Fed could prove a negative catalyst for MS stock.

MS's decision to acquire Smith Barney from Citigroup has not yet started bearing the fruit that company management had hoped. The longer the integration takes, the more costly the acquisition will become, and the more revenue-earning opportunities MS will lose out on. This could then become a drag on overall company growth and profitability in the coming quarters.

Finally, with MS's global financial exposure, European economic woes could be a significant negative catalyst for its future growth plans.

Based on the above analysis, Morgan Stanley would rate between a HOLD and a MODERATE BUY on weakness. (By: Monty R. – MarketConsensus News Contributor)