Is Dow Chemical a Good Buy and Hold? Or Should Investors Sell the Stock?

In the past six months, Dow Chemical stock (DOW) has jumped 19.69%. A sustained slump in the price of oil and natural gas (major feedstock for petrochemical companies) enabled the company to reduce $300M in raw material costs.

Under these circumstances, investors may be wondering whether there is further up-side in the stock. Should investors buy and hold Dow Chemical stock? Or should they sell and seek value elsewhere in the industry.

Let’s assess the various fundamental and valuation variables and try to address whether Dow Chemical stock is a good Buy, Sell or Hold.

Dow Chemical announced Q1 2013 earnings on April 25, reporting a 2% decline in Sales, down to $14.4B from the $14.7B reported in the year ago quarter. While “Sales Volume” declined almost 3%, the company reported a modest rise of 1% in its “Sales Prices”. This resulted in a healthy 10% increase in adjusted EDITDA, compared to Q1 2012. 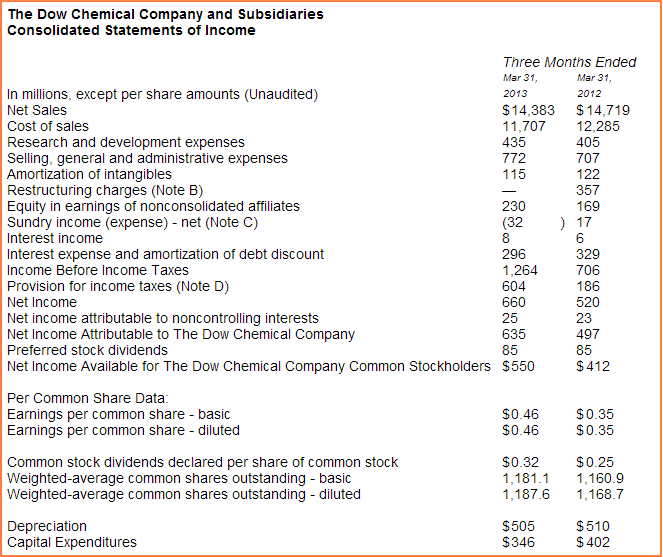 On the bright side, sales in the company’s Agricultural Sciences segment increased by 14% from 2012, with sales in seeds, traits, and oils gaining over 37%. These gains were largely due to DOW's extremely accretive partnership with Monsento (MON). The company's Performance Plastics division also generated strong EDITDA margins, up 27% on a y/y basis. Dow Chemical’s Coatings and Infrastructure Solutions operations however were not very profitable, recording a 11.2% decline in adjusted EBITDA.

While these results aren't overly positive, given the global economic environment, the company did acceptably well in the quarter. It is expected that as the effects of its cost cutting and restructuring measures kick in, the next few quarters will yield better results. Additionally, responding to the changing economic landscape, Dow Chemical is also affecting a strategic shift in its portfolio mix to lean more towards the higher-margin Specialty Chemicals business. This move too is likely to prove accretive for future revenue and earnings growth.

With a current Market Cap of around $39B, DOW is by far the smallest of the 4 competitors in the petrochemical space, including BASFY, DD and ExxonMobil Chemical Co. The company currently trades at a significant premium to its two peers (14.14x and 10.84x respectively) as well as the industry (14.06x) in general, when valued on a Trailing 12-month (TTM) P/E basis (at a multiple of 40.77x).

On a TTM Price/sale basis however, with a multiple of 0.71x, the stock trades at a slight discount to BASFY and the Industry (0.83x and 0.81x respectively) and a significant discount to the 1.42x valuation of competitor DD.

DOW currently has a 5-year expected PEG Ratio of 2.08, which makes it a more attractively valued stock than BASFY, which has a PEG Ratio of 3.36. However, compared to DD and the Industry (with PEG Ratios of 1.94 and 1.34 respectively), DOW seems slightly over valued. 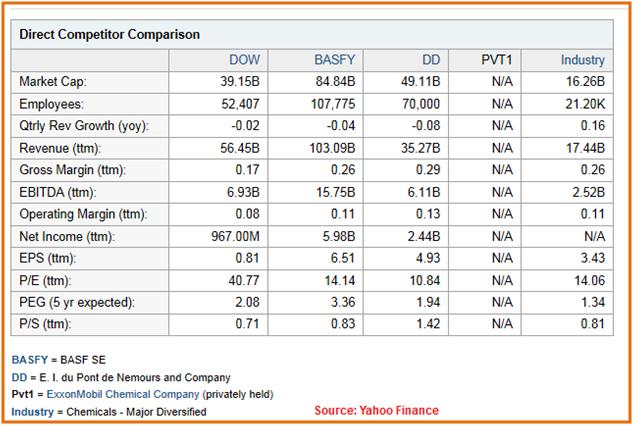 Dow Chemical's business relies heavily on inputs from energy and feedstock, primarily oil and natural gas amongst others. Weak oil and gas prices for the last several quarters have played a huge part in boosting DOW's bottom line. However, any upswing in the prices of these inputs – for instance, unrest in the Middle East – could prove to be a negative catalyst for Dow Chemical's continued profitability.

The low input cost that DOW has enjoyed is really a double-edged sword for the company. Like DOW, other petrochemical companies are seeing opportunity in depressed oil and gas prices and could (as some in China and the Middle East already have) enhance their own production capacities to ride this wave of depressed energy prices. This will tend to drive DOW's product margins lower.

(Other News: Growth Investing for The Individual Investor (Growth Stocks))

A key advantage that Dow Chemical enjoys is the fact that, because of its long history of operating as a global company, it has developed partnerships and subsidiaries in a number of regions. Unlike its smaller competitors therefore, DOW can expand (as it did in North America) or shut down operations (as it has done recently), or move production off-shore, depending on where it sees opportunities to benefit from lower production costs.

The company is also implementing aggressive cost cutting measures along with a well planned global reorganization, which should see $500M in costs slashed along with 2,400 jobs (almost 5% of its workforce) cut. These measures are expected to deliver additional savings to the company once they are fully implemented by 2014.

With its solid balance sheet, the company is well poised to leverage global deals that can become accretive for shareholders down the line. A prime example is the $20B initiative planned with Saudi Aramco to build an integrated chemical plant in Saudi Arabia, a region with some of the world's most abundant and cheap oil and gas reserves – a prime input for the planned project. The acquisition of Rohm and Haas, worth over $15B, back in 2009 is another example of a deal that's now beginning to bear fruit.

Given our above valuation stock analysis and some of the uncertainty facing the stock, we believe that Dow Chemical would rate as a HOLD for now, with a possible MODERATE BUY (on pullbacks) over the next few quarters if there are visible signs of growth coming out of Europe and China.