DuckDuckGo Lets You Search Online and Keep Your Privacy 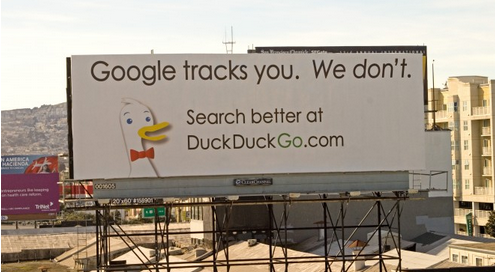 Forget about ever having to click on incognito or set special settings so as to browse in private. DuckDuckGo.com, a search engine taking on Google allows you to search for information without recording your information.

DuckDuckGo uses information from crowd-sourced websites such as Wikipedia. Compared with other browsers that record your actions, DuckDuckGo does not profile its users thus preventing sites from gleaning users’ information based on location, search history or online behavior.

Since it positions itself as a browser that highly regards the privacy of its users, it also does not store IP addresses and does not use cookies unless needed. Anonymous searching through DuckDuckGo is the norm, not the exception. This constant privacy feature is something Yahoo, Bing and Google cannot offer to their users.

Founded by Gabriel Weinberg, the company was self-funded until it was acquired by United Online for $10 million in 2006.  Today, the website is supported by paid advertisements in order to generate funding and has raised funding from investors, including Union Square partner Brad Burnham and Linux Mint.

Since May 2012, DuckDuckGo has been attracting more than 1.5 million daily searches, a number projected to rise as more users learn about the platform. Because of its popularity, it became one of the finalists of the BOSS Mashable Challenge as one of the most popular innovations in the internet in 2010.

Many experts see DuckDuckGo as a formidable foe of Google and other conventional search engines.