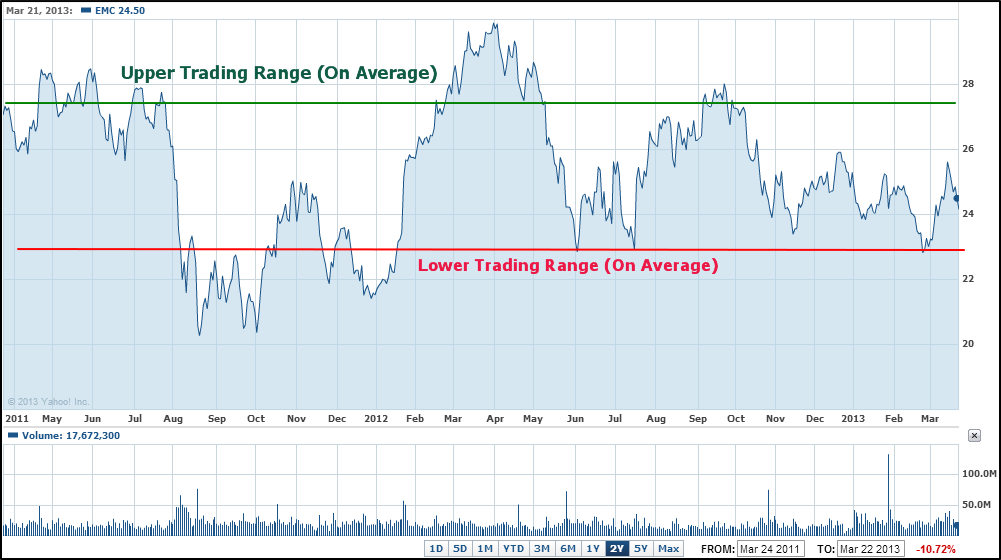 As discussed in part one (EMC Stock is Stuck within a 2Yr Trading Range) of this 2 part series, EMC stock has traded within a $23 and $27.75 bandwidth. In the last two years, the stock had been unsuccessful in staying above its $27.75 top trading range, leaving many investors to wonder if EMC will rise again in 2013 and whether the stock presents a good buying proposition for EMC stock shareholders.

Article 1 addressed EMC’s Fundamental Analysis and provided a Valuation Overview of the stock. This article will cover the Technical Perspective, Favorable/Negative Catalysts for the Stock and a Bottom Line Conclusion on EMC

EMC currently trades at $24.90 (at the time of this analysis) which is slightly above its $23.00 two-year bottom trading range. The stock was trading at $28.86 around this time last year, which means that at current levels, the stock has been beaten down by 15.9%.

From the chart above, we can see that the stock has executed the classic Death Cross maneuver, where shorter-term Simple Moving Averages (SMAs) fall below their longer-term ones, on more than one occasion during the past 52 weeks. Since mid-October 2012, however, the price has faced stiff resistance at its 100-day SMA levels ($24.50).

In late Feb 2013, the stock started climbing, moving upward to breach its 50-day, 100-day and 200-day SMAs during most of March 2013. This bodes well for the stock, as it provides strong technical signs of a potential uptick. Over the past few sessions the stock has fallen below its 200-day SMA, but seems to have found support at its 100-day SMA. Technical-minded investors should watch closely to see whether the stock pulls back below the 100-day SMA, in which case it could head for new lows, or whether it breaks resistance at its 200-day SMA to make new highs.

Over the past decade or so, EMC has profited well from its 2004 acquisition of VMWare, the server virtualization market leader. Riding on the tails of that success, EMC has now captured almost 30% of the network storage market, pushing its annual revenues from $10.6B to $15.6B in a short span of 5 years between 2007 and 2012. The continued growth of data centers, storage management and server virtualization is definitely a strong catalyst for EMC's future growth.

Another important positive catalyst for EMC's future is its loyal customer base. The very nature of the IT infrastructure products and services delivered by EMC makes switching to other vendor offerings extremely difficult and costly. This affords EMC a great captive customer base, and offers it the opportunity to cross-sell other services and solutions, as well as hold firm (and even raise) its margins.

In the short-term, the convergence of IT infrastructure in a rapidly dynamic IT landscape could pose some headwinds to EMC's market dominance. Competitors like IBM, HPQ, DELL and CSCO are quickly adapting and re-inventing themselves to take advantage of this emerging trend. Unless EMC steps up the ante with innovations of its own, it could risk losing the current niche status it enjoys.

In the longer-term, the Cloud Computing phenomenon could prove a significant negative catalyst to EMC's vision of being a global IT infrastructure and network storage management leader. Typically, customers that are migrating to the Cloud Computing model are savvy IT users themselves, and see the new model as offering more value-add than conventional network and data center management. If EMC is to stay relevant, it will have to reinvent itself to offer a better value proposition in the Cloud than existing players in this space currently offer.

Based on the above analysis, especially the solid leadership position the company holds in the IT infrastructure space and high barriers against customer erosion, EMC Corporation rates as a STRONG BUY in the short to mid-term. In the long-term, investors must watch to see how EMC adapts to newer and emerging data management challenges, like "Big data" management and Cloud Computing.