Facebook’s stock is back! Since November 9th 2012, FB has soared 64.19% and is only $6 away from its IPO price of $38. Today alone, FB stock rose 2.9% to $32.49 after Raymond James analyst, Aaron Kessler, increased his rating on the stock from market perform to outperform. 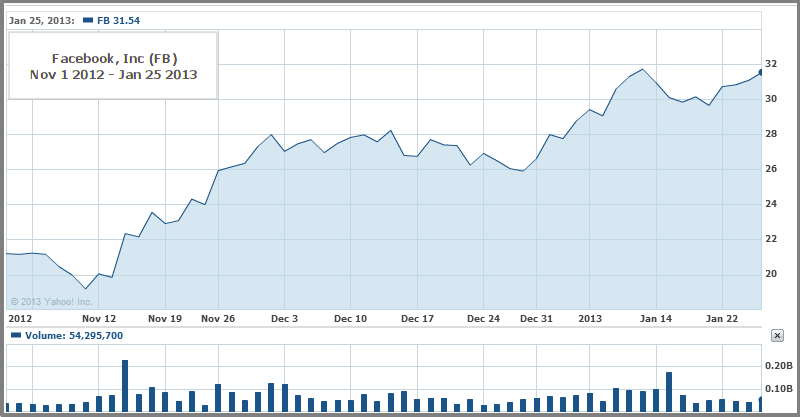 Within the last four weeks, other stock analysts have increased their ratings on Facebook, including BMO Capital Markets analyst Daniel Salmon. Salmon “sees a reacceleration of ad spending from large brands that are returning for mobile reach and frequency and more video ads, and expects financial results to beat analysts' expectations”.

On January 31th, Facebook will report Q4 earnings and investors will get a clearer look on the performance of FB’s advertising business, especially during the December holiday period. For Q3, the company announced $1.62 billion in revenue.

Other News: Facebook Stock (FB) has Strong Potential as a Long Term Investment

The company holds over $10 billion in cash, which can be used to increase growth, pay dividends to shareholders and limit the firm’s financial risk.

On January 15th, FB launched a new product called Graph Search, which allows its users to easily query the data buried within layers of their FB contact profiles, pages and the broader FB network. For example, if you wanted to find out who, amongst your FB “friends” has visited France, now you can use plain language queries to search your social network's database to get you that information. In launching this new product, FB is essentially taking on Google (GOOG), Microsoft (MSFT) and Yelp (YELP) in the search business.

Research analysts estimate that “Graph Search” can generate up to $5 billion of additional revenue for Facebook.

FB has also improved its mobile services with features such as Poke and free VOIP calling. It bought Instagram and recently rolled out Facebook Gifts – a feature that allows users to easily and quickly buy gifts for their friends.

Other News: FB Graph Search – What Is The Impact For You, Facebook & The Competition?

In addition, the company is teaming up with leading retailers and services such as Starbucks for strategic selling and promotional partnerships. By taking a small commission of each sale, Facebook only needs to improve its current monetization rates by $1 per user and FB will be already worth more than its current valuation.

At the current time, we believe investors should hold onto any FB stock they currently own. If looking to buy FB shares or add to what you already own, then it is better to wait until after the firm reports Q4 earnings. On average when a stock has risen as much FB has, the stock normally takes a hit post earnings – as traders have “bought on the rumors” and then “sell on the news”.

However, if FB announces blowout earnings, then the stock will most likely soar past its price target. Nevertheless, we see a short term correction for FB stock – either based on a correction of the overall “overbought” market situation or based on traders specifically taking profits on the stock (taking profits: selling a stock that has gone up a lot so as to lock in profits). Either way, a correction on FB stock should be used as a buying opportunity.

As reported on Valuewalk.com, “Analysts believe that whenever Facebook's stock returns to $38 per share, the worst will really be over”.