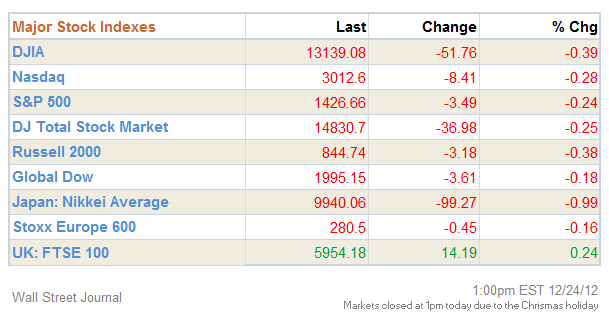 Stocks ended lower again today, as investors remain jittery about the fiscal cliff. Financial markets closed early for Christmas eve and will be closed all day tomorrow for Christmas day.

As reported by MarketWatch, “‘there are very few days left in this calendar year, and the rhetoric out of Washington is they are hopeful, yet there is no progress towards getting a deal done,’ said Robert Pavlik, chief market strategist at Banyan Partners. ‘A lot of folks are fed up with these politicians not being able to work for the benefit of their constituents. We’re telling Europe one thing and we can’t get our own house in order’, he added".
The Congressional Budget Office (CBO) is estimating that unemployment will rise to 9.1% in 2013 and the U.S. economy will face a significant recession if lawmakers are unable to resolve the fiscal cliff.
If not resolved, the fiscal cliff will cause a $500 billion increase in taxes and a simultaneous decrease in overall spending. Such a combined action will lead to a decline in economic activities and expansion.
As stated by the CBO "if all of that fiscal tightening occurs, GDP will drop by 0.5 percent in 2013. That contraction of the economy will cause employment to decline and the unemployment rate to rise to 9.1 percent in the fourth quarter of 2013.”
As published on Dailyfinance.com, below is a recipe for a 2013 recession. “All of the following are scheduled to occur around the turn of the year, and together make up the so-called fiscal cliff:
Each of these events happening in turn would likely have some negative impact on our struggling economy. But it's all of them happening at basically the same time that has the CBO so concerned”.
John Andrew Boehner, current Speaker of the United States House of Representatives stated on Saturday that “he’s ready to return to the bargaining table to avert the fiscal cliff and there’s time for Obama and congressional Republicans to reach a deal to avert the fiscal cliff”.
Art Cashin of UBS predicts a 95% recession possibility if the fiscal cliff is not resolved by end of the year.
[related1][/related1]