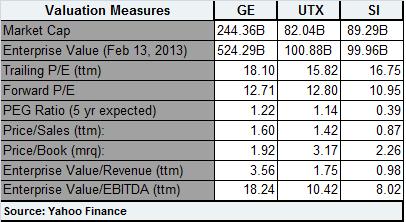 In continuing our fundamental valuation analysis on whether General Electric (GE) stock is a buy, sell or hold in 2013, we'll be reviewing some key valuation metrics for GE and its two main rivals. We believe that price-based valuation metrics are better comparators when measuring peers. That's because they boil down some of the more complex, cost-based and percent-based metrics and present them in simple to understand terms that even shareholders with average investing knowledge can understand.

The table below highlights some key price-based valuation metrics for GE, United Technologies Corp. (UTX) and Siemens AG (SI). Looking at the Trailing P/E metric, we see that investors paid slightly more (18x) for a dollar of GE earnings than they did for UTX (15.82x) or SI (16.75x). On a Forward P/E basis though, GE fares well against UTX, its major rival, but is not overly expensive compared to SI either. At 1.92x, GE does look comparatively undervalued on a Price/Book Value basis, but does seem over valued on a Enterprise Value to Revenue and EBITDA basis.

Given GE's massive Market Cap ($244.36B) and Enterprise Value ($524.29B) however, it may not be surprising that these metrics (Enterprise Value to Revenue and EBITDA) come in higher than the competition.

Over this course of time, the stock has attempted to breach support levels at its 200-day Simple Moving Average (SMA) once, but bounced back to claim new highs. Since the start of 2013, the stock has also found support at its 50-day SMA, being unable to fall below that level. At the time of this writing, the stock has only closed lower 7 times in the past 20 trading sessions. From a technical perspective, it would seem as though this stock might be poised to set newer 52-week highs. Next: Favorable Catalysts that make GE Stock a Buy (2013 Buy or Sell Analysis)