Is Gold Still a Good Investment? Or is it Time to Sell Gold and Buy Stocks? 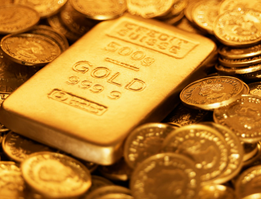 Is Gold Still a Good Investment? Or is it Time to Sell Gold and Buy Stocks?

Around this time last year (Apr 2012), renowned pollster Gallup conducted a poll amongst investors to determine the best long-term investment vehicle – Gold or other assets. As indicated in the below graphic, the results were fairly startling. Possibly because of the excellent bull run that Gold has been enjoying over the last decade or so. Fully 28% of those polled believed that Gold was a much better long-term investment than Real estate, Stocks and Mutual Funds, Term Deposits, Bonds and other investment vehicles.

Gallup conducted a similar poll a year earlier too. What was surprising about the two results though, was that despite the 10-year bull run on Gold, the percentage of investors thinking Gold was king was lower – a full 6% – than those polled around the same time the previous year (Apr 2011). So are investors really right to think Gold has lost its glitter? Is it time to lighten up on your Gold holdings and get into stocks and mutual funds? 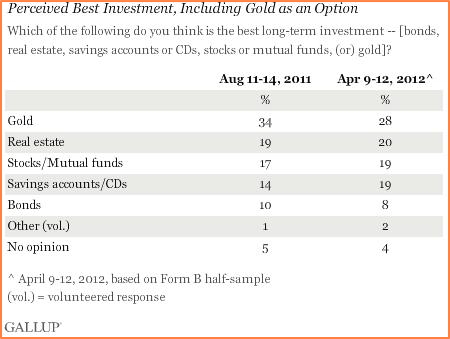 Relationship between Gold and Currencies

The price of Gold is typically measured (and quoted) in US dollars. To understand what the future holds for Gold therefore, we must understand the relationship between the US greenback and the precious metal. In simple terms, the US dollar and the price of Gold are inversely related. So, if a single unit of Gold (typically an ounce) is equal to US $1,000 when you buy, you will profit if the value of the US dollar declines, and lose if the value of the US dollar rises – more explanation to follow below.

It is important to note here that the value of other major currencies in relation to the US dollar will have a direct impact on the relationship that Gold has to the US dollar. As is evident from the 5-year chart of currency rates seen below, comparing the greenback against some of the world's leading currencies, we note that other than the Australian Dollar (AUD), most major world currencies, including the Euro (EUR), the British Pound (GBP) and the Canadian Dollar (CAD) have been steadily rising against the USD. 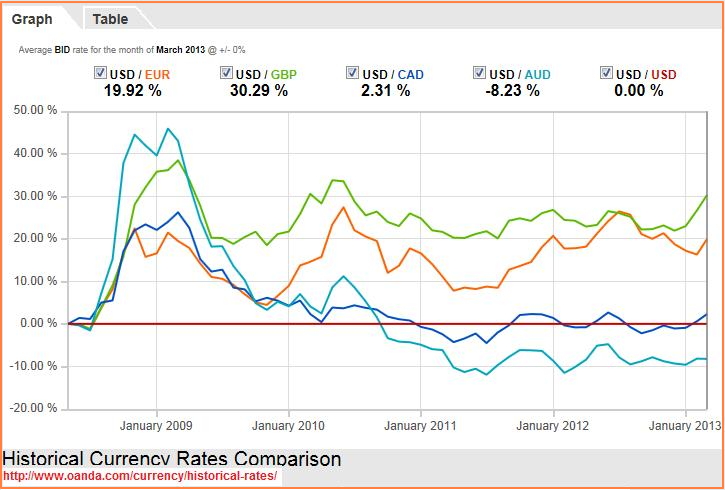 So, by implication therefore, a declining US dollar means that the price of Gold should be on the rebound (based on the inverse relationship between the two). To put that in perspective, let us go back to our hypothetical example of 1 unit of Gold = 1,000 USD. Let us assume that we had bought Gold five years ago at 1,000 USD and now five years later, we decide to sell. If we do, then we would receive more than 1,000 USD. This is because it now takes more US dollars to buy the same unit of Gold, due to the USD having declined in value over the last five years.

Investors looking at all the above analysis may be wondering what the point of it is, since our analysis is yet to present a case as to whether investors should buy, sell or hold on to their Gold holdings. Well, like every major investment decision, the answer to that question will depend on each investor (age, risk tolerance and diversification of their portfolio). Investing in precious metals like Gold is definitely much more riskier than, say, investing in Term Deposit Certificates or Long-Term high-quality Bonds. However, as our next chart seems to indicate, Gold has been a pretty impressive investment over the past decade when compared to a number of asset classes.

The chart above tracks the 10-year performance of the SPDR Gold Trust (GLD), which seeks to closely mimic the price of physical bullion, against the leading indexes, including the 10 Year US Treasury Bond index (TNX), the Dow Jones Industrial Average (DJI), the NASDAQ Composite Index (COMPX), the NYSE Composite (NYA), and the S&P 500 (IN). The results are clear: Gold has outperformed each and every one of those benchmarks since mid-2008 (the height of the financial crises).

(See Also:Declining Gold Prices Indicate all that is Gold Does Not Glitter)

The Future of Gold (Value Proposition)

As a general rule, investors would do well to keep an eye on the fortunes of the US dollar. As a result of the tremendous increase in money (USD) supply into the US economy, largely injected through several rounds of Fed-inspired Quantitative Easing (QE) policies, the "value" of the greenback has been impacted (declining) relative to other world currencies.

By pushing more money into the economy, QE is decreasing the value of the USD against other world currencies where governments aren't following QE policies. Any change in QE, either increasing it or withdrawing it, will likely have an inverse relationship between the USD and other currencies. Accelerating QE will drive the greenback lower (and Gold higher), while withdrawing QE will improve the value of the USD.

(See Also: The Future of Big Oil Companies – Are Oil Stocks a Buy, Sell or Hold?)

For investors trying to determine the value proposition of Gold, one hint might be to keep a close watch on what the Fed decides about its monetary policies. However, investors will also need to watch how other governments handle monetary policy. For instance, the April 4th 2013 announcement of the Japanese government to indulge in QE of its own sent the value of the Japanese Yen tumbling on the world markets. But it also sent the price of GLD shooting up, from $149.53 on Apr 4th to a $152.80 close on Apr 5th 2013.