Google Stock Soars: Is Google a Bargain at $740 a Share? 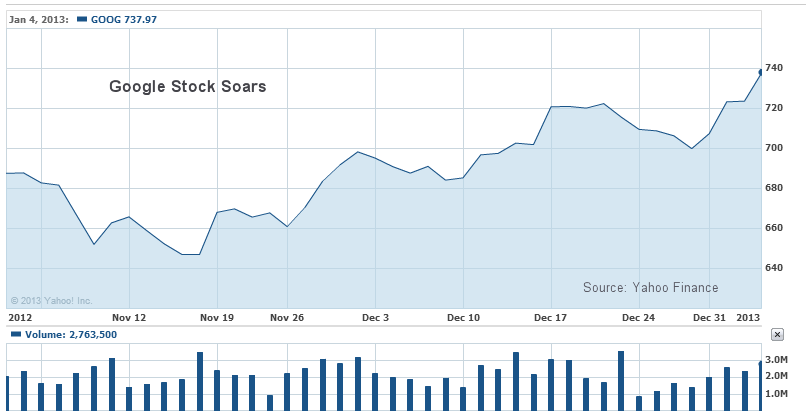 Google’s stock (GOOG) has been rising since November of 2012 and recently jumped above $735 a share. The company started off 2013 with an important triumph, much to the chagrin of rivals Yelp (YELP) and Microsoft (MSFT).

Google is not completely out of the woods yet, however, and the antitrust investigations against it will pose a significant problem for the search giant's future revenues. Additionally, Google's decision to leave China a couple of years ago is hurting revenues. Yet, the tech giant is poised to deliver more value for shareholders.

Google by the Numbers

The Mountain View, CA based internet giant has a market cap of 242.49B, making it the fourth largest company in the world after blazing past Microsoft in the fall of 2012. Google recently celebrated its fourteenth anniversary; a rarity in the tech world. The company’s innovations and competitive drive have provided immense value for shareholders, although its profit margins tapered off in the 3rd quarter of 2012 at 15.43%. Still, its EPS of 31.92 and growth rate of 19% are encouraging signs for investors deciding whether or not to buy Google stock.

Google may have had the last laugh over the Apple (AAPL) maps snafu, but it is Apple that is leading the way by way of profits. Nonetheless, Google has a highly successful mobile strategy at a time when Facebook (FB), Yahoo (YHOO) and Microsoft are struggling to get one of their own going.

Analysts can harp on all they want about Apple’s potential, but it is hard to fathom how a company with escalating R&D costs and a short product life cycle provides better value for investors than one that has supreme control over the wave of the future, i.e. the internet.

What are hedge funds doing with Google?

A great way to make money trading stocks is to see what the smartest money out there is doing. Google and other tech giants like Apple and Microsoft were a favorite of hedge funds in 2012 and will continue to be so. And honestly, with a P/E ratio of 23.12, who can blame them?

The one thing that investors will quickly notice is that the stock is getting mighty close to its 52 week high of $774.38 and this can be a good or bad thing. The good news, though, is that the fundamentals look great so that even a $740ish price is actually a bargain for Google.

The next date that investors should watch out for is January 18, 2013. This is when the next earnings announcement will be made.