Google Stock Will Rebound. Is GOOG a Good Buy in 2013? 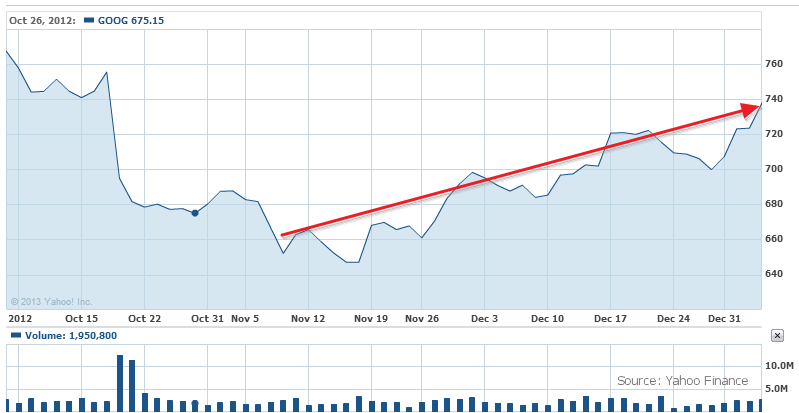 Google’s stock (GOOG) rose above $737 on the third day of trading in 2013. As one of the leading technology companies in the world, investors are definitely taking a second look at the stock. Despite a drop in margin profits in 2012, GOOG still looks like a good buy in 2013.

Google has a quarterly revenue growth of 45% and earned $14.1 billion during the 3rd quarter of 2012. Lately, the company took a hit from its Motorola Mobility acquisition, which cut into its profit margin. The future is looking good, however, and it looks like Google (GOOG) will rebound in 2013. The company has successfully sold off non-core Motorola Mobility segments, and in December of 2012 it sold its Motorola Home Cable business to Arris Group for $2.35 billion.

Although Google’s stock declined by 10.7% in October of 2012, the stock value has since risen after the company released its new maps application for Apple.

Additionally, it looks like continued growth is expected for the company’s profits. Analysts estimate up to a 25% increase in non-GAAP revenues, and a 16% increase in non-GAAP earnings. The first quarter will likely have inflated revenues from the acquisition of Motorola. Despite being a large tech company, Google is still growing at an impressive rate.

Investors can expect Google to continue to innovate and release new products in the coming year. One recent example of this is the hiring of Ray Kurzweil as the company’s Director of Engineering. Hiring innovating individuals is just one way that Google demonstrates its continued commitment to staying at the top through innovation.

Google’s position as an industry leader means it will continue to face stiffer competition as other tech companies strive to chip away at its market share. Furthermore, the company has also faced problems with heightened privacy concerns. Google will need to keep its eye on these issues, even though they do not present an immediate threat.

Despite rough patches in 2012, Google looks to be a solid choice for investors in 2013.