Graph Search – What Is The Impact For You, Facebook & The Competition?

So, what's all the buzz about?

From the time business reporters and tech bloggers received the cryptic "come see what we're up to" message from Facebook (FB), chat rooms and the blogosphere were already abuzz with wild rumours.

Everyone was offering theories about what FB might be up to.  Some speculated the unveiling of the much anticipated "mobilization" of advertisement revenues. Others said it would most likely be a search engine to rival Google. Still others rumoured the possible unveiling of a Facebook Smartphone. The guessing game reminded me of one of the Superman movies – Is it a bird? Is it a plane? No, it's "super search" from Facebook! 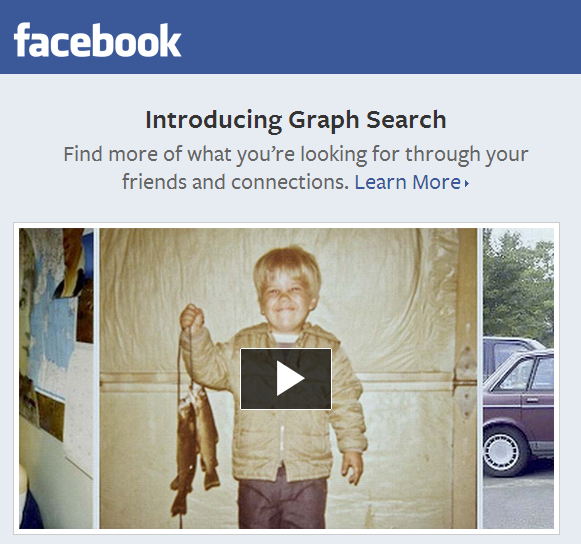 It turns out that the "search engine" rumors were correct – well, sort of. What FB unveiled was their version of a much lacking data mining tool for its users. Dubbed "Graph Search", this new tool is meant to empower over 1 billion users with the ability to unlock the power of data buried within the layers of their FB contact profiles, pages and the broader FB network. In essence, Graph Search is supposed to help you query Facebook's database in search of people, places, photos and possessions that you can relate to. So for instance, if you wanted to find out who, amongst the 4,000 fans and followers you have, has visited Naples, now you can use plain language queries to search your social network's database to get you that information.

Other News: Facebook (FB) Stock – Is It a Buy, Sell or Hold?

What's in this for me?

As a Facebook user, being able to use Graph Search to mine data that's hidden in plain sight, about your contacts and connections, is a definite plus. There could be a million use cases for having such a tool. From zeroing in on people in your neighborhood that work in the same line of business as you, to identifying specialty stores visited by people or groups you follow.

For an opportunist, having access to this type of information is priceless. It can help you discover and connect with people, places, photos and things in a way that was until now not easily possible. And if you are astute enough, you could even use this information to monetize services that you may offer to a certain type of demographics that you hitherto didn't know very much about.

What’s at stake for the competition?

The way Graph Search is designed could also have an impact beyond Facebook – the company (not the tool). Once users are hooked on the tool, it is likely that their search tastes will gradually become attuned to delivering results from within the confines of the Facebook network, providing FB a captive audience for future monetization initiatives.

For instance, if Graph Search is unable to deliver you results relevant to your search from within the walls of Facebook, it will hop onto Bing, the Microsoft search engine, to deliver related search results, effectively shutting out rivals like Google, Yelp and Yahoo from getting dibs on potential user search requests. And FB is able to do this because of one major competitive advantage it enjoys that other sites like Google or Yahoo don't – a virtual treasure trove of personal information. Without actually sharing personal information with the searcher, Facebook can use that information to customize your query.

Take for instance the scenario where a searcher is looking for people in his/her neighborhood that work in the same line of business as they do. Google or Yahoo would never be able to serve up results for that tall order. But with FB's access to people's profiles, a dish like that could be served up in seconds!

By building a virtual wall around your queries, primarily serving results from within its own database, FB could be set to deny the competition potential advertisement revenue that FB users would have otherwise channeled to them.

What the future holds

To someone looking beyond the media hype and the immediate euphoria from the aftermath of the announcement, it would almost seem like FB has taken the first steps towards building something that can truly be monetized in the coming years. For now however, based on Facebook's share price performance immediately following the announcement – from around 10:15 AM onwards from the date.

of the media event – it doesn't look like shareholders and investors are thrilled by Graph Search. As is apparent from the graph above, the downward spiral of FB's share price almost coincided with the timing of the Jan 15th 2013 media event.

Part of that downtrend may be explained by the huge hype preceding the announcement. After the IPO fiasco, investors were desperate to believe that Mark Zuckerberg had finally heard their cries of pain and was going to announce something spectacular – but were disappointed. However, many investors may also have been disappointed because Graph Search itself is not all that they were hoping it could be. It will not make FB any money in the near term. And that's why the stock has been taking a beating since then.

With the Jan 16th announcement of the release of an update to FB's Messenger app for iPhones, which allows free VoIP calling – much like what Skype delivers – there was a glimmer of hope for the stock. It saw a sharp rally towards close of trading, but has ways to go before reaching parity with its pre Graph Search announcement.