Have No Fear, Apple’s Stock (AAPL) Will Rise Again 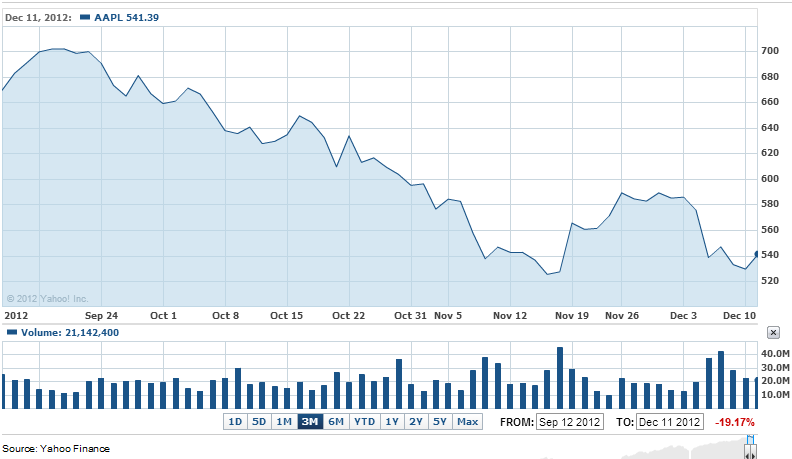 Over the last few months, Apple’s stock (AAPL) has been a hot topic among investors. With a large number of trades recently, it seems that many stockholders are selling their shares as the stock price falls. Some investors and analysts worry about the stock and predict another drastic decline in the future. These investors, especially technical analysts, tend to focus on two aspects of Apple’s stock: price and trading volume.

See Also: Is Apple's Stock a Buy at the Current Price – Growth vs. Value Analysis

Price: In September, just before the introduction of the iPhone 5, Apple’s stock hit its highest point at $705.07. Last week, it closed at $533.25, a 24% decline from its peak price. Last Wednesday, AAPL fell 6%, its worst one-day loss in four years. It recovered on Thursday as technology stocks got a boost, but the gain was basically flat as investors remain anxious about the looming fiscal cliff and the state of the U.S. economy.

Volume: More than 35 million AAPL shares were traded on Wednesday. Many analysts believe this 70% increase in trading from the average daily volume indicates an enormous selloff from shareholders. It may be a turning point for Apple’s stock or simply the end of the fiscal year, but the high trading volume sparked panic among investors.

Should investors be unnerved by the uncertain future of the company’s stock? I think not! Here’s the bottom line: Apple is a powerhouse of innovative products, and it is here to stay. Customers of the brand are incredibly loyal and are not likely to switch to Android or Windows products any time soon. CEO Tim Cook stated, “We’re entering this holiday season with the best iPhone, iPad, Mac and iPod products ever, and we remain very confident in our new product pipeline.”

Every new release from Apple has been a huge hit with customers, and sales continue to grow around the world. In the fourth quarter alone, international sales accounted for 60% of revenue. Perhaps analysts should concentrate less on the American market and shift their attention to the bigger picture. In the fourth quarter, ended September 2012, Apple reported record revenue and profit. The company sold 14 million iPads, 4.9 million Macs, and 5.3 million iPods. Its largest product line for revenue growth was the iPhone, with 26.9 million sold, up 58% year-over-year.

Although the stock price has decreased over the last two months, the company posted revenue of $36 billion in the fourth quarter alone. It expects to earn $52 billion in the first quarter of 2013. Company earnings per share were roughly $9 in 2009, and they are near $45 per share today. Over the course of three years, Apple has grown exponentially.

Apple’s stock (AAPL) has been on a downhill slide since September, but with a price per share hovering above $500 and billions of dollars in revenue growth, it is safe to say that Apple is doing just fine. Of course, no one can say how the stock will perform in the coming months, but big projects are in the works. Cook has said that the company will start to manufacture one of its existing Mac lines exclusively in the United States in 2013. With innovative products launched all the time, Apple remains a leader in the industry, and investors should have no fear about the future of the company.