On a Market Cap basis, HLF is currently valued at $5.11B. That's approximately 10% larger than GNC Holdings (a major competitor), and 53% smaller than Newell Rubbermaid (another HLF competitor). However, HLF's Enterprise Value is 4.5% less than its smaller market-capped peer GNC. 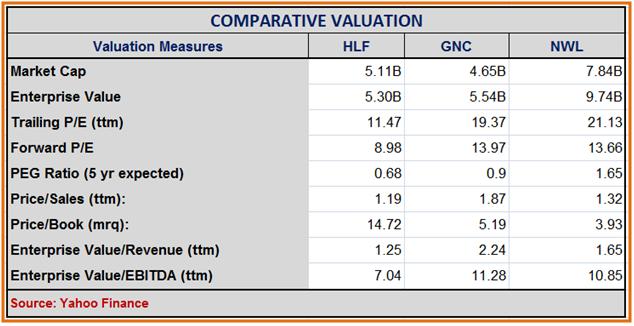 On a TTM Price/Sales basis, HLF is valued at 1.19x on its trailing sales, while GNC and NWL are priced much higher on this metric, at 1.87x and 1.32x respectively. Morningstar industry valuation is 2.3x, which makes HLF cheaper than the overall industry on this valuation metric. On a Price/Book value, however, with a valuation of 14.72x HLF appears to be more expensive than GNC (5.19x) or NWL (3.93x).

While appearing cheaper than its industry peers on most of the above valuation measures, HLF also has a much better 5-year Earnings Growth profile. Its 5-year expected PEG ratio is 0.68, compared to the slightly higher 0.9 of GNC, and a much less attractive 1.65 of NWL. Prospective investors may also be interested to know that HLF currently offers the highest yield (2.447%), compared to either GNC (1.278%) or NWL (2.219%), and slightly below the Morningstar industry average of 2.5%, which makes it an attractive buy.

During the early part of 2013, the company's stock price experienced downward pressures, initially as a result of a proxy fight between HLF management and activist hedge-fund investor Bill Ackman, who had likened HLF to a "pyramid scheme". In early April, the Herbalife’s shares were again hit by an insider trading scandal, which caused KPMG to withdraw as the company's auditors, and is currently the target of an FBI investigation.

In mid-April, on the backs of solid quarterly results, HLF stock mounted a strong comeback, breaking through its 50-day, 100-day and 200-day SMA. Over the past two months, the stock has tested support at its 200-day SMA several times but has not fallen through, which is a good sign.

The stock currently is in an upward momentum, finding support at its 50-day SMA. It has closed high on 8 of its last 10 trading sessions, adding 12.14% to its value in that period. Based on these technical signs, and especially in light of analysts predicting yet another strong few quarters of earnings, the stock appears set to make new 52-week highs in the coming weeks. There is always risk that additional negative headlines could derail this encouraging progress.

The company is in an extremely competitive yet thriving business – the food and nutrition market. With global consciousness about the need for healthy diets on the rise, HLF is well positioned to ride the wave of healthy lifestyle preferences, especially in the 18+ age group. As indicated by Herbalife CEO’s comments during the Q1 2013 earnings conference call: “Obesity and poor nutrition are global public health problems. Our distributors are proud to be part of the solution.”

While the renewed global attention to living a healthy lifestyle is a favorable catalyst to HLF's future growth, the ongoing slow-growth economic situation threatens to undermine the company's future profitability. With an ever increasing number of people out of work from the youth and young-adult demographic, the very segment that comprises a big portion of the company's target market, any worsening of the crises (especially in Europe and North/Latin America) could put a dent in the company's future earnings.

The company relies largely on a strong online distribution network to grow its sales and market share. The recent revelations that some large distributors are pitching HLF's business model as “selling dreams and stories" to the general public, however, has led many analysts to question the longer-term sustainability of this model. Should any further cracks be "exposed" in HLF's distribution practices, it could be an extremely negative catalyst for the company's future.

At this point it is hard to guess what regulators may or may not do as part of their investigation into Herbalife’s business practices. Further regulatory oversight could prove to be a negative catalyst to the company's survival.

Based on our fundamental, valuation and technical analysis of Herbalife, MarketConsensus News rates HLF as a BUY. However, investors must continually watch the headlines to stay ahead of any negative fallout from the high-profile scandals that have rocked the company of late. Closely watching the company's earnings on a quarterly basis might also be advisable, as it could serve as an early warning signal of any troubles ahead.

Best of luck in your investing,
MarketConsensus News