The Housing Market Has Reached a Bottom – Time To Buy?

Current Status of the Housing Market

There is good news for the U.S. Housing Market. In January of 2013, the National Association of Realtors (NAR) reported that “existing-home sales jumped more than 9 percent in 2012, the highest level in five years”. 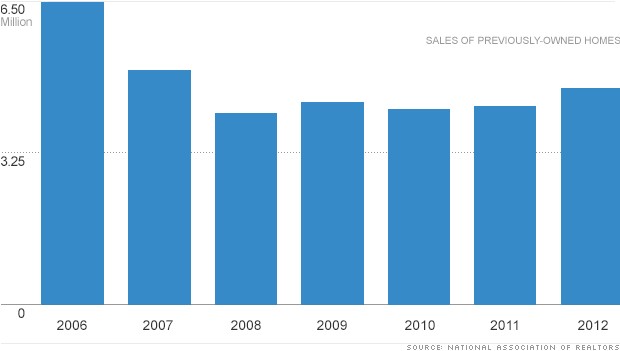 Housing Sales of Previously-Owned Homes in 2012.

This is great news in light of a disappointingly slow growing U.S. economy. The NAR also reported that:

While home prices have signaled a new wave of home buying, there are some that are forecasting a prolonged period of slow housing market growth. Gary Shilling, a financial analyst for the Wall Street Journal, voiced concern that there is still an excess inventory of about two million homes in the United States. He reported that it will take over four years to eliminate the backlog of homes and cautions buyers to beware.

There are plenty of other signs, however, supporting an improved housing market.

A lot of consumers are beginning to realize that the rent they are paying for their rental homes and apartments are becoming higher than what they would pay in mortgage payments.

In Chicago, it costs 40% more to rent a home than to own one, evidencing a marked increase in renting costs over the past several years. The monetary incentive to buy has become very significant. After all, throwing away a portion of your monthly paycheck on rent can appear wasteful when the alternative is building equity.

There are several other factors to consider when analyzing whether to buy a house in the current market: good credit is key, a hefty down payment is a plus, and job security is a must.

In today’s volatile economic marketplace, due diligence includes performing research on market trends, your own financial status, and considering the reality that housing may not have fully recovered yet. After exercising caution, decision-making power belongs to the consumer.