As Hewlett-Packard (Stock: HPQ) focuses on a corporate restructuring and transformational program, the firm continues to face stiff competition from IT giants like IBM and Dell in every business segment where it operates. This situation is causing investors to question whether Hewlett-Packard is a buy, sell or hold.

While HP is considered the market leader in the Printer and PC business, with half of its Revenue and over 40% of its Operating Income generated here, the most recent quarterly results are clear indication that HP is fighting to maintain its place in this highly competitive segment.

See Also: Is Dow Chemical a Good Buy and Hold? Or Should Investors Sell the Stock?

As indicated by the 1-year stock chart below, HPQ was a clear laggard for most of the past twelve months, but has since recovered to outperform both DELL and IBM significantly. Given this turn of events, HPQ shareholders and other investors may be wondering if CEO Meg Whitman's bold turnaround plans are starting to pay off, and whether HPQ shares make a good Buy or Hold, or should investors sell and look for value elsewhere.

Let's try and answer these questions through our analysis below.

Revenue declined 10% on a year-over-year (Y/Y) basis, making it the 7th straight quarter of declining revenues since Q3 2011. 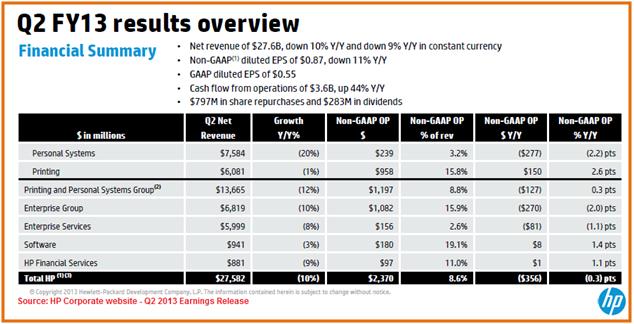 Digging deeper into the cause for the revenue decline, we see that sales dropped across all of the company's operating segments, with Printing & Personal Systems accounting for the largest (12%) Y/Y decline. The total number of Personal System units declined by 21% Y/Y, with revenues from Notebooks, Desktops, Commercial and Consumer sales declining 24%, 18%, 14% and 29% respectively.

While revenue from Enterprise Services recorded an 8% Y/Y decline, they did increase by 1% sequentially. Revenue from the Enterprise Group, including from sale of Networking and Storage devices and Servers, pulled back by 10% Y/Y. The company's Software business also continued to perform disappointingly, reporting revenue of $941M which was lower by 3% on a Y/Y basis. The largest declining component in this segment was "Licensing Revenue", which dropped 23%, while Support revenue increased by 12% on a Y/Y basis.

The brightest spot in the Q2 results is probably the company's Cash Flow from operations, which came in at $3.6B, up 44% on a Y/Y basis, and 24% sequentally. The company has made judicious use of this strong Cash Flow by using a portion of it to reduce its debt by $1.8B, which many investors would agree is a much better use of cash than increasing dividends. Still, the company did return some value to shareholders in terms of $797M in share repurchases and $283M in dividends.

So what can we expect from HPQ moving forward, and should investors consider HP Stock (HPQ) a good buy or sell?

For the coming quarter, stock analysts’ expectations are for an EPS of $0.86, with the subsequent quarter (Q4) expected to bring in an EPS of $1.00. On the quarterly revenue front, expectations are that the company will report $27.3B in revenue for Q3, and $28.1B for Q4. For the full year 2013, the company has provided guidance of Operating Cash Flow of $10.0B and Free Cash Flow of approximately $7.5B.

As Q2 earnings results have demonstrated, HPQ is facing stiff challenges in trying to maintain or grow its market share in almost every segment of its business. Year-over-year, revenue by region was also down: -9% in EMEA, -12% in Asia Pacific, and -10% in the Americas. If this trend continues over the next several quarters, it could prove to be a negative catalyst for the company's planned turnaround.

There has been talk (rumors and speculation) that the company plans to spin off its Personal Computer business. While it is true that PC sales are gradually declining world over, the imminent disposal of the PC business could further drag down the company's (near) future growth and earnings potential.

HP's extensive (and loyal) customer base is an extremely favorable catalyst to any future growth strategy. This not only offers the company the ability to cross-sell its products, but also creates powerful opportunities to sell new and improved products in the future, should those become available. The high cost for switching to other vendors, especially when it comes to high-end equipment like Switches, Routers, high-power Servers and Network Storage and Infrastructure equipment, means HPQ has an almost captive customer base.

See Also: Top Insurance firms that are dependable when it comes to paying out claims

With a turnaround in the U.S. economy, it is expected that corporate IT spending will increase over the next few quarters. The rationale for this line of thinking is that companies have held back IT spending because of economic constraints, but may not be able to function optimally much longer using outdated or end-of-life IT equipment. If that hypothesis proves to be accurate, then it could prove to be a favorable catalyst for HPQ's future growth and profitability.

The global shift by corporations into the Cloud computing space can be viewed both as a negative as well as a positive catalyst for HPQ. If the company is able to engineer its turnaround to take advantage of this new paradigm, then it could establish itself in a leadership position in Cloud-based technologies, which should prove accretive for long-term profitability. If it fails to leverage this opportunity, however, competitors like Cisco (CSCO) and IBM could dominate the Cloud space, making HPQ's turnaround even more difficult.

Based on the analysis above, in our opinion, HPQ rates as a HOLD. We believe that investors need to see several consecutive quarters of solid revenue growth before taking new positions on HP stock.