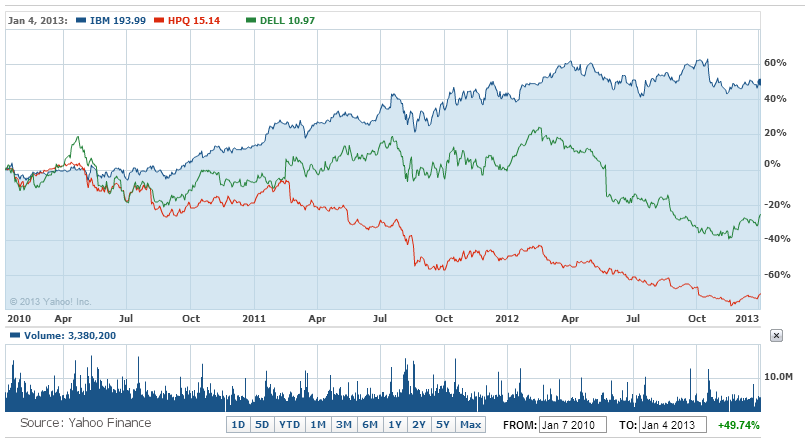 Since January of 2010, IBM’s stock has risen 49.7%, while the stock values of its rivals HP and Dell have both fallen -70% and -25% respectively. The growth in IBM’s higher margin businesses, fuelled by knowledge outsourcing to countries like India, is a key reason why the stock has outperformed its rivals.

IBM is also better positioned than its rivals to ride the tide of the next waves of technology – social media and cloud computing. In the last quarter of 2012, IBM made many strategic acquisitions to position itself for future growth and expansion in these two domains.

For years IBM’s management has been saying something that its rivals have only just started to claim; that it is in the solutions business. IBM does not offer product packages; rather it provides an integrated set of solutions consisting of products, software and services. Cloud computing and social media, two sectors driving the technology industry today, would fit nicely into this approach.

Compared to other technology companies like Apple, Facebook, Google or Amazon, the growth prospects of IBM are relatively ignored by a lot of investors. And that is precisely the reason why it should be exciting for a value minded investor.

A lot of technology stock analysts spend time trying to predict iPad sales or the next major acquisition of an e-commerce company by Amazon; but it is IBM which has found a firm footing in the stable enterprise business. Business customers are harder to win but are a lot stickier than retail customers.

IBM is one stock that more investors should consider giving a closer look in 2013.