iPhone vs. Android – Two views on the winner! 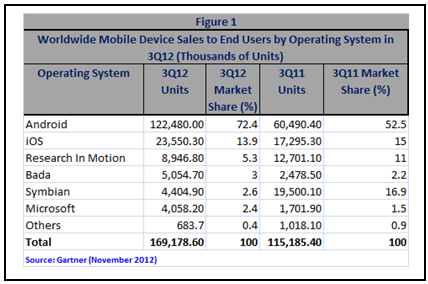 Many of us view the battle between iPhone versus Android-based devices from a consumer's perspective. However, we also need to factor in the investor perspective. Investor confidence in a company is driven largely by consumer interest in the company's products. If consumers stop buying, that affects earnings, which causes an exodus of investors.

A recent research report by Gartner indicated that as of Q3-2012, Android operating system based devices had clearly been gaining market share over iOS-based (iPhone) devices.

The findings undeniably showed that Android devices increased their market share by almost 20% more units, compared to the same quarter of the previous year (Q3-2011).

iPhone devices on the other hand actually lost market share, by over 1% according to the Gartner figures.

Clearly this would point to Android as the consumer's choice, favoring the relatively new entrant as "darling" over the legendary Apple. This despite the fact that in the battle for Android apps vs. iPhone apps, iOS (for now) has a much diverse eco system than Android does – but perhaps not for too long!

Within the iPhone versus Android war, there is a sub-battle raging – the Android vs. Android skirmish – which is seeing a number of big players jostling to grab a slice of the burgeoning worldwide Android pie. 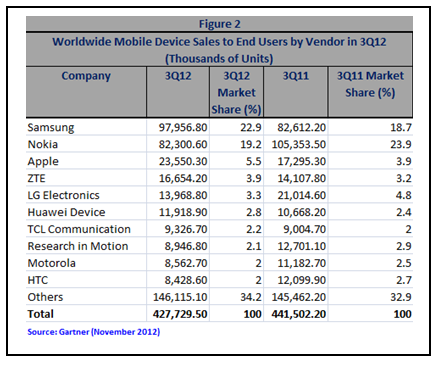 It's difficult to say whether it was Apple's iPhone or Android devices by other vendors, including Samsung, HTC, Motorola or TCL, that may have been the cause of edging Nokia – once a favorite of the mobile phone industry – to second place in this Android versus Android sub-battle.

See Also: Apple vs. Google. But Wait, There is a Third Contender

As consumers battled with the question of whether to go with iPhone or Android, investors were battling with the question on which stock to own. As is evident from Figure 3 below, the 2012 stock performance of Apple, Samsung, Nokia and RIM shows a clear race between Apple (blue) and Samsung (gold). 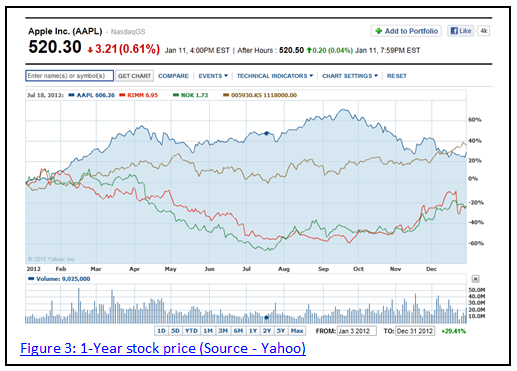 What's clear is that from the beginning of 2012 until September, investors markedly favored Apple over Samsung, roughly corresponding to consumer sentiment demonstrated by the Gartner findings.

Since then, however, Samsung's stock has been rallying, visibly gaining the upper hand in the battle for investor hearts and minds.

A detailed look (below chart) at the Q3 and Q4 2012 movement of Apple’s and Samsung’s stock validates the belief that both consumers and investors seem to be switching towards Android as the more logical choice.

Looking at Figure 4 again (see below), one can't help but take note of two other contenders in the smart phone space – Research In Motion (red) and Nokia (green). 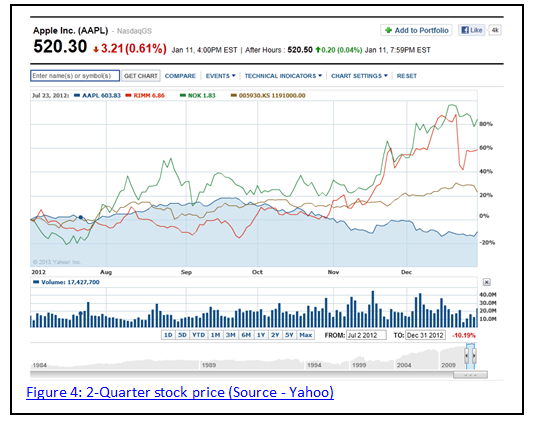 While Nokia Android devices may be viewed as valid answers to the "iPhone or Android" question, investors and consumers alike may soon be forced to ask the question "Android or Windows 8".

With Nokia shares surging over 19% in early January 2013, on reports of doubling sales of their Windows 8-based Lumia phone, this opens a very real possibility of iOS creeping up to second place. But only if Nokia users dump their Android phones in favor of Nokia's Windows 8 devices.

But wait! What if the much anticipated late Jan 2013 release of the much delayed BB10, from RIM, really takes off? Could that open up another race – "Windows 8 versus BB10" – for second place in the overall OS rankings?

Hardly likely, but one never knows! And what if the decision of the European regulators in the "Samsung V Apple" case, also expected in a few weeks time, comes down heavily in favor of one side or the other.  Could that affect the outcome of the iPhone V Android debate?

And the winner is….?

For now however, barring a major unforeseen catalyst in the iPhone Versus Android battle, Android and Samsung are kings of the OS and Vendor lineup respectively. iOS is likely to hold onto its second place as most beloved consumer choice for Operating system, ahead of BB10 or Windows 8.

If all the hype about BB10 is to be believed, then the more interesting debate in 2013 however is not going to be "iPhone or Android", but rather "Windows 8 or BB10".