Will Lloyds Banking Stock Continue to Rise?  (Is the stock a Buy, Sell or Hold in 2013?)

The stock of Lloyds Banking Group continues to rise as the company executes a comprehensive restructuring effort. Despite the continuous issues facing the bank, (ill-fated merger of HBOS and Lloyds, European crisis, PPI mis-selling, etc.), investors continue to bid up the stock price.

From September 2012 to February 2013, the stock prices for both LLOY and LYG have risen by more than 59%. On Wednesday, Jan 23, 2013 Lloyds Banking Group provided an update on its restructuring efforts by announcing an additional 940 job cuts, bringing total job cuts to 31,000 since 2009.

As reported by Reuters UK, "Lloyds said the jobs would be lost in its operations, insurance, retail, wealth, international and commercial divisions and were part of the reductions previously announced in its strategic review. The part-nationalised bank said in June 2011 that it planned to save 1.5 billion pounds ($2.4 billion) by letting 15,000 staff go."

Taking Lloyds Banking’s shaky prospects and also the firm’s restructuring efforts to turn itself around, investors are asking: Is Lloyds Banking Group stock a buy, sell or hold in 2013?

Lloyds management, however, believe the acquisition will eventually pay off and stated that: "while the short term outlook for all financial services companies in the UK and around the globe is challenging, we believe that the acquisition of HBOS will be a success and presents us with many opportunities.”

Lloyds’ latest earnings report (as of Q3 2012) shows a decline in net interest income for the nine months ending Sept 20, 2012. However, due to a reduction in impairment charges, the company’s “underlying profit” was1.9B pounds (versus 768M earned last year).

After subtracting costs and other expenses from underlying profit, the firm was left with a loss of -1B pounds for the period. This loss, however, was almost three times less than the -2.7B loss generated in 2011.

The 63.9% reduction in losses is giving investors hope that in 2013 the firm could possibly report a positive net income instead of another loss. This expectation combined with the firm’s restructuring and cost reduction successes have been the major drivers in the rise of the company’s stock price. 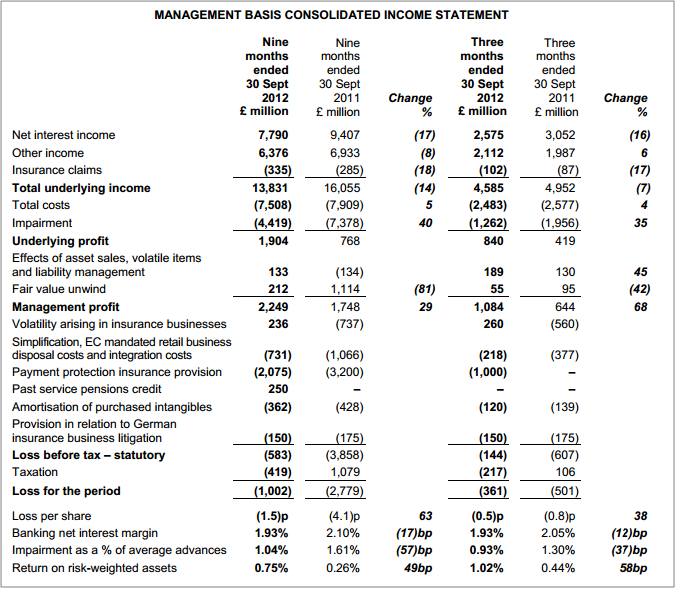 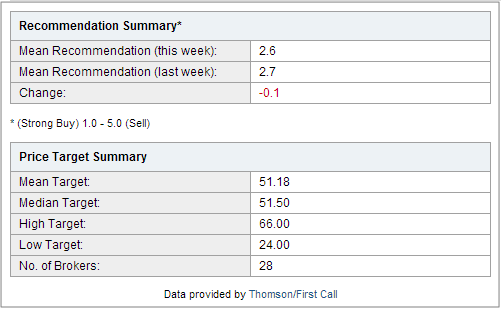 March 1, 2013 is the next earnings date for the group, and investors are estimating a negative -49.40% growth for this year. However, looking forward the general market consensus is for a 53.90% surge in the company’s growth starting next year.

Growth expectation is a major factor that drives a stock’s current market price. When investors are forecasting strong growth for a particular company, they normally take this into consideration and adjust their valuation models accordingly – bidding up a company’s existing stock price in the process

Taking the various fundamental, valuation and restructuring efforts into consideration, we believe Lloyds Banking Group has strong potential to turn itself around, an event that will support a continual increase in the stock price. We however believe that it is best to wait for a pullback in the stock before increasing your holdings of the company’s shares. The stock has experienced a strong 6 months rise and is bound for some consolidation (decline) in the near future.