Look! Is that a Phone from Facebook? What’s in it for Investors? 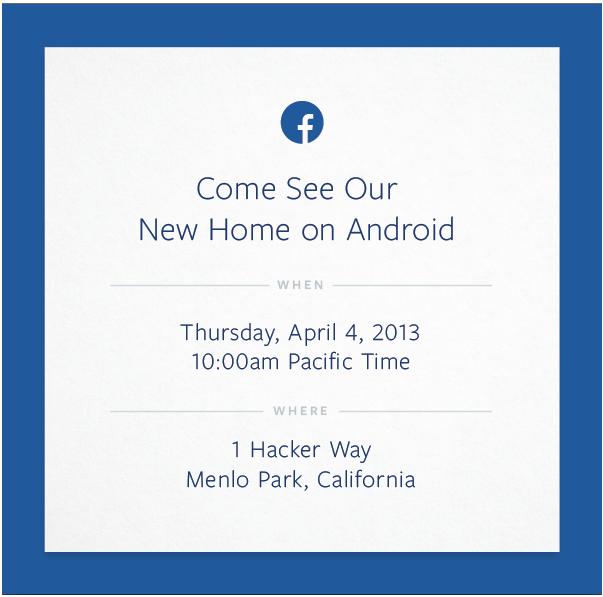 Look! is that a Phone from Facebook? What’s in it for investors?
Social media giant's invite to a mysterious Android event could mean good (or bad) news for investors (and traders) alike!

Sunday March 31st, 2013:  In a cloak-and-dagger style reminiscent of an announcement earlier in the year to "Come and see what we’re building", Facebook on Friday, March 29th issued a "Come See Our New Home on Android" invitation.

The event is scheduled to take place at the company's headquarters on April 4th. The earlier announcement in January 2013 was of course related to Facebook's "Graph Search" feature. Rumors swirled back then of a possible major launching of "mobile monetization", something that Facebook users and shareholders alike were anxiously awaiting. But that did not exactly happen.

And now again, the rumor mill is buzzing!  This time it's about the possibility that the company will announce a "Facebook phone". There's talk that the social media leader will unveil a version of Android for a phone built by smartphone maker HTC. Stories are floating around that this version of Android has been specially envisioned with Facebook features and functionality deeply rooted into the core of the operating system. The aim of such a platform would be to provide mobile device users with a "mobile Facebook experience". These rumors aren't new, and have been making the rounds for over a year now. And as recently as last summer, Facebook CEO Mark Zuckerberg denied that such a move could "make sense" for the company.

Let's face it though. On the face of it (no pun intended!) a Facebook phone might seem logical to some analysts. Every month, over 50% of Facebook's 1.06 billion users interact with the platform using a mobile device. So what better way to bring these users even deeper into the Facebook fold than with a FB phone. This will surely open huge opportunities to better monetize their users’ interactions. However, would it be a wise long-term strategic move? For every 10 analysts that say yes, you'll likely find an equal number that say "No!".

The naysayers believe that jumping into the phone business would take Facebook way out of its comfort zone. With players like Apple and Samsung already fighting it out over declining margins, the time for Facebook to jump in and compete with the likes of Nokia, Microsoft, Blackberry, Google (with a rumored phone of its own!) and other rivals for third place was 15 to 18 months ago (Apple vs. Android. But Wait, There is a Third Contender). Back then, it wasn't quite clear who would benefit from the Apple Vs Samsung/Android race, and a powerhouse like Facebook, with a 1 billion plus captive customer base, might have stood a chance. But that train has left the station.

So what might investors really expect on April 4th? The most likely scenario is that Facebook will unveil a more "mobile friendly" look and feel to itself, supplemented by a collection of mobile Facebook Apps that will bring users even closer into the social media family. The company already offers Pages Manager for iOS and Pages Manager for Android to help users personalize their Facebook experience on two of the most prolific mobile platforms available. Taking that experience one step further shouldn't be too hard to imagine. However, by unveiling more native apps, the company will have greater opportunity to up-sell and cross-sell to mobile device users.

As an investor, what will this do to Facebook's stock? Well, it all depends. If the market is truly expecting Facebook to unveil a Facebook phone, and the company disappoints them, then you can expect the stock to take a hit again, similar to the decline it experienced when Graph Search was perceived as a disappointment by some investors. The launching of a Facebook phone however would certainly set the stock on fire – guaranteed!

(See Also: FB Graph Search – What Is The Impact For You, Facebook & The Competition?)

On the other hand, by rebranding itself to align more closely to the expectations of mobile users, Facebook could at last be demonstrating to its shareholder base its commitment to monetize itself in the mobile world. If the April 4th announcement delivers some concrete proof that such monetization is just around the corner, then shareholders could expect a sharp movement of the stock to the upside. (By: Monty R. – MarketConsensus News Contributor)