Despite the decline in revenue and continuing accumulation of losses, Nokia’s stock price has mounted an impressive comeback since its April 18 plunge. As indicated by the chart below, relative to industry peers Apple (AAPL) and Motorola Solutions (MSI), NOK's shares seem to be on an uptick, in contrast to the declining fortunes of its two peers.

Nokia has reported Net Losses for 3 of its last 4 quarters. Although the losses seem to be reducing in scale, as seen in the table below, it is of significant concern to investors that these losses are accompanied by a declining revenue trend. Surprisingly, while revenues have been sliding, the company has been able to produce improving (though still negative) profit margins, which came in at -18.69%, -13.38% and -4.64% respectively in its 3 loss-generating quarters.

So what do the next couple of quarters hold for this struggling former giant in the highly competitive handset market, as estimated by stock analysts? And how should this impact investors’ consideration in buying, selling or holding NOK shares?

According to stock analysts’ estimates, Nokia will likely report a loss for its current Q2 quarter. The consensus is -$0.03 Earnings per Share for the quarter. Wall Street is also estimating that NOK's full-year 2013 EPS will come in at $0, with next year's (full year 2014) EPS pegged at $0.1. 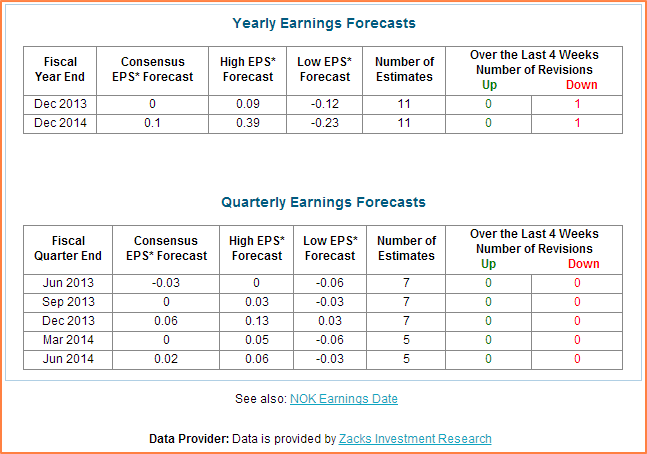 In terms of the company's fundamental business strategy, data from renowned researchers like IDC and Gartner Group seems to confirm that Nokia’s Windows Phone is gaining traction as a potential third wheel in the tightly fought smart phone market space, (Apple's iOS and Google's Android being the other two dominant players).

See Also: Apple vs. Google. But Wait, There is a Third Contender (Nokia) 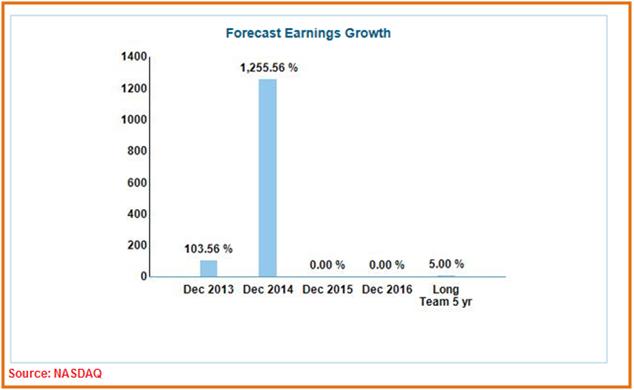 Analysts see NOK's partnership with Microsoft as being very accretive to its longer-term profitability, putting the company's long-term (5-year) earnings growth potential at around 5%. A lot of this optimism however will revolve around how well Windows 8 handsets are received by the market, and how well the company executes its other growth strategies, including competing with Apple and Samsung for a share of lower-end markets.

Price/Earnings (P/E): Given that NOK has been generating losses over the past several quarters, comparing its valuation on a Trailing Twelve Month Price/Earnings basis against its competitors wouldn't yield much in terms of analytical value. On a Forward P/E basis, however, NOK is trading at a multiple of almost 28x its future earnings. That's a staggering 211% more expensive than the cash-flow generating machine called AAPL!

Price/Earnings Growth Ratio: Investors looking for companies with good growth profiles and selling at reasonable prices prefer a company with a low PEG Ratio. At 17.38, NOK's PEG Ratio towers above AAPL's 0.48 and MSI's 0.92, making it a rather expensive stock on this metrics.

Enterprise Value: On an EV/Revenue as well as EV/EBITDA basis, NOK's valuation (0.23x and 5.98x respectively) seems cheaper than its two industry peers.

Other News: Why Do Customers Hate Barclays Online Banking So Much

Back in February 2011, when NOK joined forces with Microsoft Corporation (MSFT) to launch a new global mobile ecosystem, there was initial euphoria that this move might be the catalyst everyone was waiting for to turn the company's fortunes around. Not much happened immediately thereafter, as rivals AAPL and Samsung gained market share. However, a recent report by global research company IDC indicates that things might be changing. 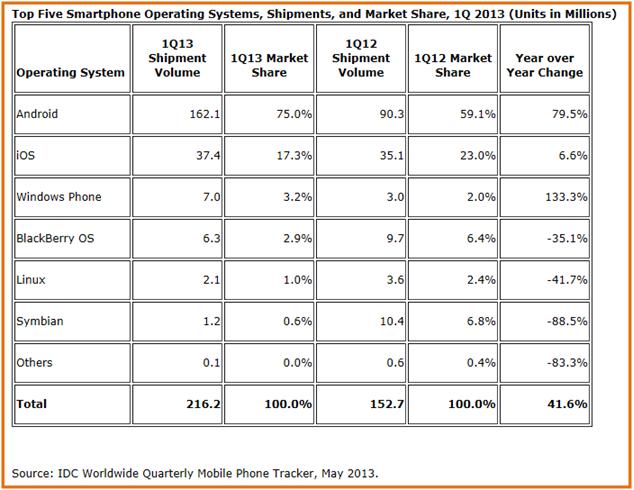 As this data indicates, there seems to be a definite turnaround on the horizon for NOK, judging by the fact that Windows Phone's year-over-year share of the market has improved by a staggering 133%. And while Windows Phones are offered through other handset vendors too, NOK is credited for shipping over 79% of those phones in Q1 2013. It does look like NOK's decision to partner with MSFT is finally being validated.

Other News: What's on the Horizon for Verizon? (Is Verizon Stock a Buy, Sell or Hold?)

While these figures might give shareholders some optimism about the company's future, research from the Gartner Group indicates that NOK's mobile phone share has declined by nearly 5% in Q1 2013. Even though the company managed to sequentially improve phone sales, its ranking in the smart phone ranking table has dropped from number 8 in Q4 2012, to number 10 in Q1 2013. The root cause for this steep decline has been a sharp reduction in the sale of NOK "feature phones" – cheap phones that have limited "smartness". It appears that consumers are holding on much longer than anticipated to their older models, giving smart phone sellers like NOK slower conversion rates to newer phones. If this trend continues to last, it could be an extremely unfavorable catalyst for NOK's future growth.

One sure way to battle declining sales and waning consumer interest is to continue to innovate and reinvent ones way back to the top. And it appears that NOK has taken this lesson to heart. Rumors have it that the company is about to launch a 41 Mega Pixel model of its Lumina range of handsets that will carry the most advanced PureView camera technology, putting NOK in the ranks of trailblazers in optical technology in phones. Such innovations could prove to be favorable catalysts to putting the company back on the path to profitability.

Recent rumors that NOK could be a potential take-over candidate by Chinese tech company, Huawei Technologies, sent the company's stock higher, indicating that the market views such a deal as accretive to unlocking shareholder value. Any such move could therefore prove extremely favorable for NOK's future.

Based on our above Fundamental, Valuation and Technical analysis, MarketConsensus rates NOK stock as a HOLD.

Best of luck in your investing and don’t hesitate to let us know if you have any questions on this Nokia Stock Analysis – Is NOK a Buy or a Sell in 2013? article.