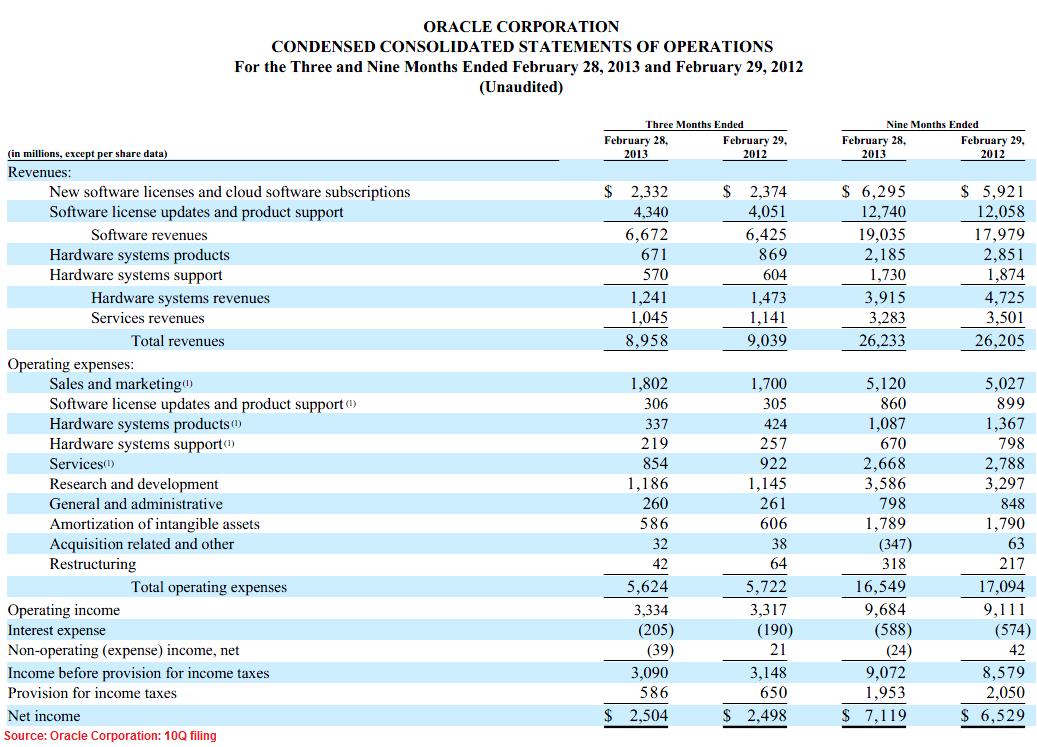 Oracle (ORCL) has long been revered as the leading solutions provider in the Database Industry. However, with Cloud computing, newer open-source database competitors (PostgreSQL, Ingres, etc.), and increasing challenges from established rivals (MSFT and IBM) threatening its dominance, ORCL is fighting back to stay relevant.

Looking at the below stock chart, we see that ORCL has outperformed both MSFT and IBM over the past 10 months. But, as competitors increase the pace at which they are chipping away at Oracle’s market share, investors are asking whether they should continue to buy and hold ORCL, or whether it is time to sell the stock.

Let's review some key valuation data that might help answer some of these questions.

For Q3-2013, the company reported lackluster financial results that disappointed investors. For the quarter, Total Revenue was down by $81M, representing a slide (from Q2 2013) of nearly a full percent. Of great concern to stock analysts was that revenue from emerging technologies (such as Cloud software), was down by $42M, representing a hit of 1.77% from the previous quarter.

(Other News: Is Gold Still a Good Investment? Or is it Time to Sell Gold and Buy Stocks?)

This decline is seen as a very serious development as the Cloud is what analysts see as the "new frontier" for established and new entrants into the database arena. The company also performed poorly on the Hardware Systems Products and Support business, with revenues declining 22.78% and 5.62% respectively. 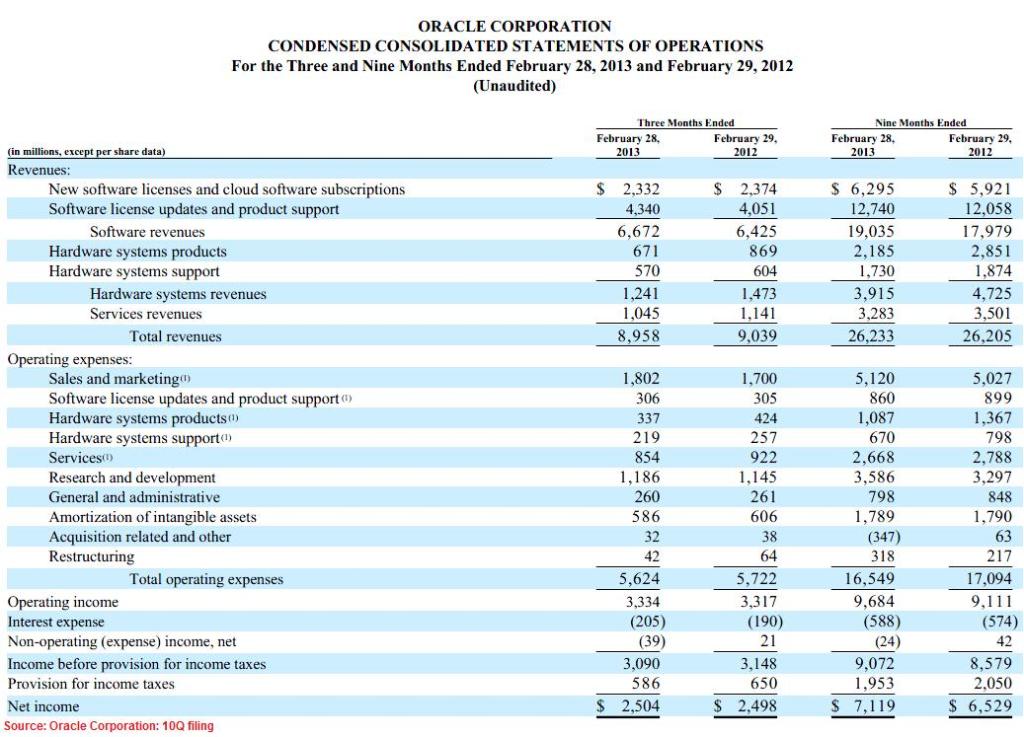 On a year/year (y/y) basis, however, ORCL’s Total Revenue improved slightly (up by 0.11%) with a healthy 6.32% improvement in New Software Licensing and Cloud Solutions.

Net Income for Q3-2013 was essentially the same as the $2.49B reported for the previous year (Q3-2012). This gave ORCL a Earnings Per Basic Share of $0.53 for Q3 (compared to $0.50 in Q2), with a y/y EPS (Basic) of $1.48, compared to $1.30 in Feb 2012. The one silver lining in the earnings report, is the improvement in Software Updates and Support Revenue. This improvement is note worthy since the Software Updates and Support Revenue segment represents almost 45% of ORCL's total revenue.

ORCL's current valuation seems to be more or less in line with the Industry Average and its S&P 500 peers – when viewed across multiple valuation metrics. For instance, with a PE multiple of 15x, ORCL is slightly cheaper than the overall S&P 500 valuation of 16.6x. A Price/Book valuation of 3.5x makes the stock fairly valued when compared to a 3.5x and 2.3x valuation for the Industry and the S&P 500 respectively.

After mounting a spectactular recovery from its 52-week low of $25.36 in mid-May 2012, Oracle’s stock rallied steadily to reach $32.85 in late October, only to drop below its 50-day and 100-day Simple Moving Average (SMA) over the next several weeks of trading.

During this period, the stock traded almost flat, eventually finding support at its 200-day SMA to build a base for a recovery rally from $29.45 in mid-November to $36.20 in early February 2013.

Between Febuary 2013 and late March 2013, the stock once again went into a base-building pattern, finding support at its 50-day SMA levels. One would have expected this base-building to lead to an eventual upward rally, but that didn't happen.

Between March 20th and March 25th, the stock price declined sharply, from a high of $35.73 to $31.25. The catalyst to ORCL's sharp decline was the March 20th announcement of weaker than anticipated software revenue results for Q3-2013, which the company blamed entirely on dismal execution of its sales strategy.

The downward spiral was so bad that, at one point during intra-day trading on Mar 21 (a day after the earnings announcement), the stock plunged almost 10%, prompting various stock analsyts to revise their ratings from "Outperform" to "Underperform".

Having broken support at 50-day, 100-day and 200-day SMA levels, the stock now trades roughly at its 200-day average. Any more disappointing news could easily push the stock down to the $29.00 levels that it saw in mid November 2012.

The advent of Cloud Computing poses a great threat to ORCL's market share, as greenfield database users tend to opt for cheaper alternates, including open source variants. While ORCL is taking steps to address this concern, the short-term threat of losing new sales to the competition is very real. Still, the fact that the company has extended its support window for its legacy database products is definitely a good strategy to ward off the competition while ORCL re-invents itself.

Some of Oracle's rivals in database solutions, such as SalesForce.com, CRM and Workday, already have a head start in delivering open-source solutions that are capable of handling "big data" and Cloud computing. While the juggernaut ORCL gradually turns its ship around to enter those arenas, it needs to ensure that it defines for its customers a clear transition path to the new paradigm. Failure to do so might prove a catalyst for losing its leadership position in the database area.

Oracle is gradually repositioning itself as the supplier of choice for "engineered systems" (software that's pre-integrated into systems such as Telecoms and Healthcare devices, to reduce the cost and complexity of IT infrastructures while increasing productivity and performance). Its growth by acquisition strategy, including the acquisition of Acme Packet and Tekelec, are a good sign that ORCL is fully committed to maintaining a leadership position in this market.

The overall slowdown of corporate IT spending is the biggest negative for ORCL's future growth. Should there continue to be economic drag, many companies may decide to defer or cut down on upgrading or procuring new database solutions. Worse still for ORCL is the appeal that open-source solution providers, like PostgreSQL and Ingres, have for small businesses eager to reduce IT budgets.

As a result of the above analysis, MarketConsensus is rating Oracle Corporation (ORCL) as a MODERATE BUY. Depending on how well (or poorly) the company performs over the next 2 quarters, shareholders may want to consider a BUY (or SELL) position.