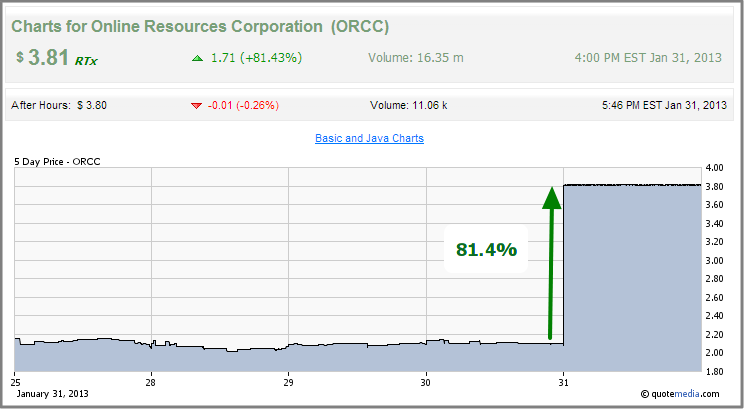 Even before U.S. stock markets were officially open for trading today, 5.6 million shares of Online Resources stock had already exchanged hands during the Pre-Market trading period (8am to 9:30am). On Wednesday, ORCC had closed at $2.10 a share. On Thursday morning, the stock had risen and was trading at $3.81, up 81.4%

Founded in 1989, Online Resources provides services to close to 2,000 financial institutions and credit management firms. It is consider a major provider of online banking and bill payment solutions, backed by its proprietary payments engine.

ACI Worldwide will be acquiring all of ORCC’s 32.7 million outstanding common shares and redeeming the “preferred stock, worth $127.8 million at the end of September. ACI Worldwide valued the acquisition at $263 million”. The boards of both companies have approved the deal and the acquisition is expected to close by March 29th 2013.

Other News: Looks Like a Market Correction is Imminent – Time to Take Profits (2013)?