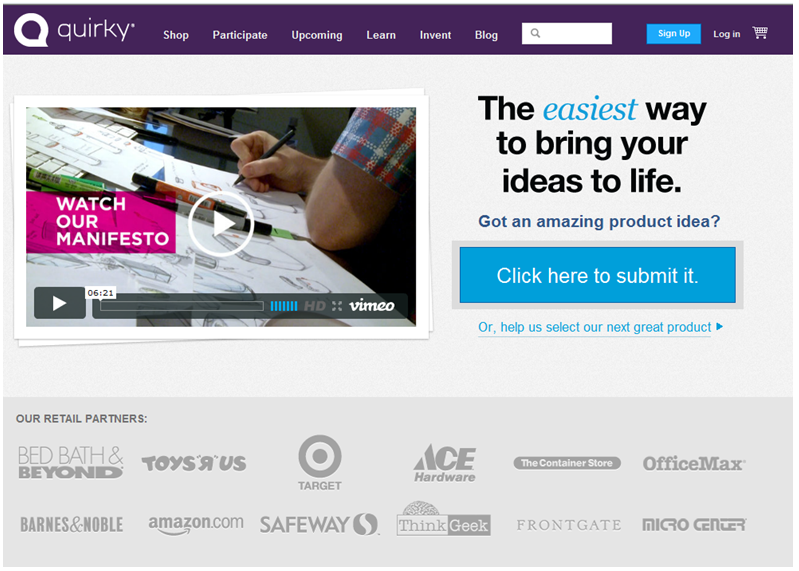 Quirky, a relatively young startup is enabling anyone to bring their creative ideas and inventions into production at major retail outlets.

The company was founded by 26-year old Ben Kaufman in June 2009 and is based in New York City.  Four years before launching the firm, Ben was on a New York City subway when a girl walked by wearing a set of headphones that he had designed years ago.  "I saw something I invented being used in the real world, and it was the best feeling," Kaufman says during an interview with Entrepreneur.com. "That's when I realized I needed to help more people experience that”.

As a crowd-sourced, expert-driven product design platform, Quirky brings the professional expertise to individuals with brilliant product ideas.  Angling to be “the easiest way to bring your ideas to life,” Quirky lowers the barriers to invention like financing, engineering, legalities and distribution, allowing anyone to bring a great idea to fruition.

The process is as follows: first, inventors submit their concept for a fee of $10, which allows their design to be posted publically to the Quirky community.  (Originally the price tag was $99, but the cost has been lowered as the company matures and grows their capacity.)  The design with the most positive reviews becomes the product of the week. These products have a chance to make it to production, given that enough people commit to buy it.

As a product moves towards production, prototypes are created by a team of in-house technology specialists, engineers and marketing experts, allowing the community to respond to their design decisions and shape the product creation process.  The state-of-the-art prototyping facilities include 3D printers and laser cutters, as seen below. 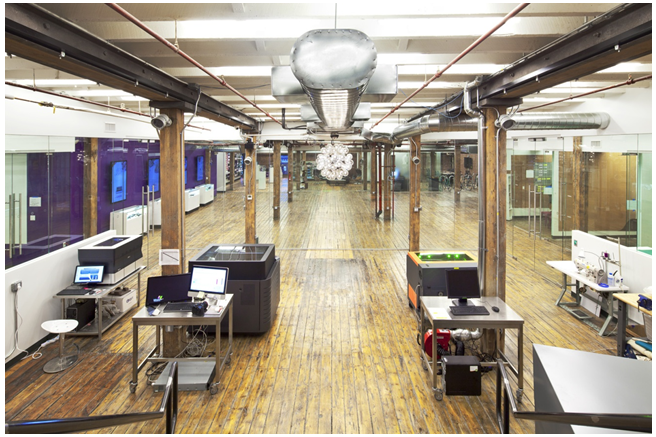 “Influencers” – those in the community who volunteer suggestions or vote on products – also share in the profits of a successful product, comparable with their level of involvement. In fact, 30% of any given product’s revenue is given back to the Quirky community as cash; 40% of that amount to the individual inventor, the rest divided amongst those involved in giving feedback.

The startup is flush with cash from investors; Quirky brought its funding total to $97 million in late 2012 after collecting $68 million in Series C funding.

The company has proven that it is on the path towards solvency: from generating $1 million of revenue its first year, Quirky earned $7 million the next, followed by $25 million this past year.  While Quirky is yet to have a blockbuster product success, they do boast a number of impressively well-received products.  This list includes Pivot Power, a flexible power strip which has sold over 500,000 units to date.

The price of failure, which is generally a major part of bringing products to market, is greatly reduced with Quirky’s agile and quickly-moving model. The traditional product development of its competitors involves a process that is much lengthier, more expensive, and riskier, with a success rate not much higher than 50 percent. Quirky’s relatively small investment per product means that individual market failures are less of a setback.  The ability to quickly adapt to trends and ideas allows Quirky to capitalize on new markets much faster than its more traditional counterparts.  For instance, the average time from inception to production – from an idea’s submission to the final product on a store shelf – is an astounding 120 days.