Regions Financial (RF) Turns in a Profit! Is RF Stock a Buy? (Fundamentals)

For the first time since 2008, Regions Financial Corporation (RF) has turned in a profit. Ever since the financial crises, the company has consistently been in the red, reporting net losses as high as $5.5B in 2008.

The stock chart above, of Regions Financial (RF) and its competitors BB&T Corporation (BBT) and SunTrust Banks, Inc. (STI), show three stock tickers that seem to travel in unison, rising and falling in harmony. However, 2013 has clearly seen RF taking the lead over its nearest rival STI.

(See Also: Why BAC is a good Buy in 2013 – Fundamental and Valuation Analysis)

While RF has done a great job of de-leveraging its balance sheet and returning to profitability, it still faces some economic headwinds in the years to come. In today's low-interest environment, shareholders may well be wondering if the stock is a buy, hold or sell.

Let's review some key fundamental, valuation and technical data for RF that might help answer that question. 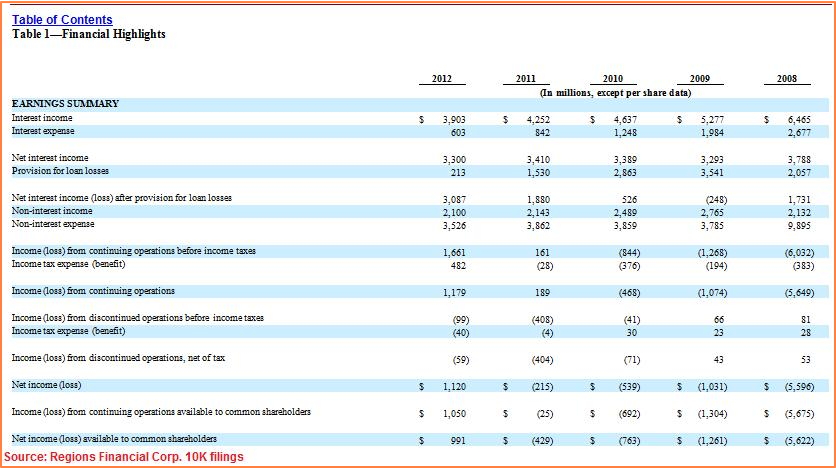 Based on data from Morningstar, RF's current valuation appears to be fairly in line with the Industry average, and a bit cheaper in some respects to its S&P 500 index peers. The stock trades at a Price/Earnings multiple of 11.3x, which is not significantly far from the Industry average of 14.2x. However, it does seem to trade at a discount to the S&P 500's 16.6x P/E multiple. Competitor BBT has a similar P/E valuation, trading at 11.4x, while STI's P/E valuation of 7.9x makes it the cheapest of the 3 peers based on current earnings.

On a Price/Book and Price/Sales valuation, at 0.8x and 2.1x respectively, RF is valued fairly in line with the Industry average (1.0x and 2.2x respectively). RF's Price/Cash Flow valuation of 4.6x, however, is certainly at a discount to the 7.8x of the Industry and 9.7x that of the S&P 500, making it a comparatively cheaper stock based on that valuation.

(Other News: EMC Stock is Stuck within a 2Yr Trading Range – Is the Stock a Good Buy or Sell?)

While both RF and STI trade at equivalent P/B valuations of 0.8x, RF's Price/Sales valuation of 2.1x is much closer to that of its competitor BBT, which trades at 2.3x its current Sales. Both RF and STI offer comparable Dividend yields (0.5% and 0.7% respectively), while yield-hungry investors may find BBT's 2.7% dividend yield more attractive than that of RF or STI.