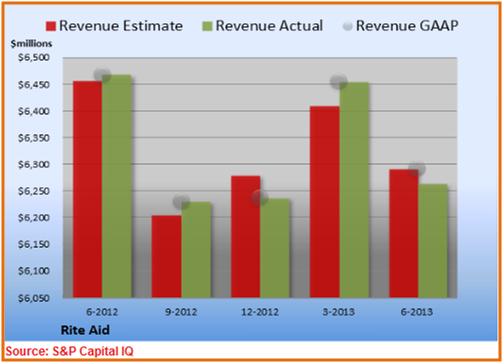 Year to date, Rite Aid stock (RAD) has risen by 115%. The surge in RAD’s stock price is causing investors to question if Rite Aid stock is still a good buy and hold at the current price, or whether the stock has risen too far, too fast, making it a sell (or even a short sale).

On a comparative basis, as indicated by the stock chart below, Rite Aid stock has been performing extremely well against competitors such as CVS Caremark (CVS), Walgreen Co. (WAG) and Wal-Mart Stores (WMT), especially since April 2013.

In the below fundamental and valuation stock analysis report, MarketConsensus News reviews Rite Aid Corporation to determine whether the stock (RAD) rates as a Buy, Sell, Hold or Short.

Rite Aid Stock Analysis (Is Rite Aid a Good Investment or a Sell?)

RAD released its Q1 2014 earnings results in June. Overall, the company seems to have met analysts’ expectations for both Revenue and Earnings per Share (EPS). Investors, however, were expecting a much stronger result. For the top line, Rite Aid reported revenues of $6.3B. This represented a 3% decline in revenue compared to the same quarter last year. The company attributes 2.7% of this decline to the impact from lower-cost generic drugs. The drop in revenue also reflects a 2.5% decrease in same store sales. Both Pharmacy sales and the number of prescriptions filled by same stores declined by 458 basis-points and 0.1% respectively.

On a brighter note, the company's Net Income for Q1 2014 rose to $89.7M, or $0.09 per diluted share. This compares favorably to the Q1 2013 Net Loss of $28.1M, or $0.03 per diluted share. Primary contributors to the Net Income included an increase in Adjusted EBITDA, and a decline in interest and other debt retirement-related expenditure. EBITDA, which came in at $344.8M compared to $274.2M from a year ago, improved largely on the backs of improved margins from new generic drugs, incremental margins from front-end sales, and strong cost-cutting and expense control. 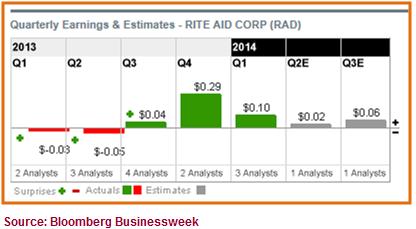 On a Market Cap basis, RAD (with a MC of $2.49B) is clearly a dwarf compared to its main competitors: CVS Caremark (CVS), Walgreen Co. (WAG) and Wal-Mart Stores (WMT). WAG’s Market Cap is $244.41B, CVS has a Cap of $70.51B and WAG has a Cap $41.90B. Some might argue that WMT is not entirely a direct competitor, with pharmacy and prescription management accounting for only a fraction of its business.

See Also: Is Walmart Stock a Good Buy, Sell or Hold at the Current Price?

Price/Sales (TTM): On a P/S (TTM) valuation, RAD is by far the cheapest of the 4 peers, trading at multiples of 0.10x, which is significantly cheaper than the industry average of 0.37x for this metric. All of the other 3 competitors are trading in the low to high 50's for this valuation metric. 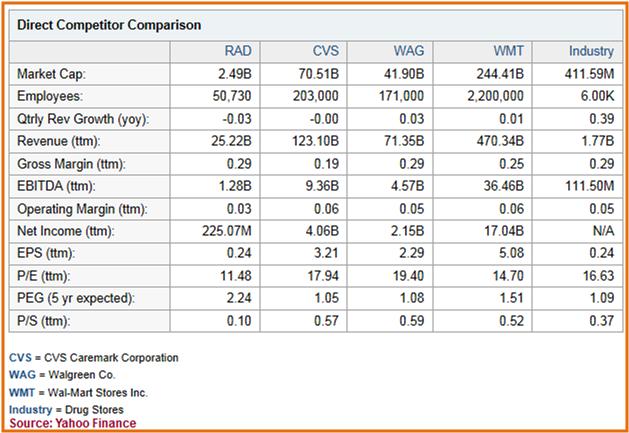 One of the biggest negatives for RAD is the increasing competition it is facing from big players like Wal-Mart and Walgreen. Other retail pharmacy chains and mail order pharmacies also pose a competitive threat for the drug store chain operator.

According to DrugstoreNews.Com, RAD was amongst 5 drugstore operators that together accounted for 63% of all U.S. prescription drug revenues, totaling nearly $277B last year. As the current U.S. administration's health care reforms (Obama Care) kicks in, RAD is also likely to be a beneficiary of increased spending on prescription drugs. This should prove very accretive to the company's longer term profitability.

Last year saw a plethora of M&A activity in the pharmacy space, including the merger between Express Scripts and Medco Health Solutions. Most analysts believe that while there is likely to be a temporary pause in such activity this year (no major announcements have been made so far), the trend is likely to continue in the coming years. Should this prediction come true, it will lead to much larger competitors for RAD, which may have to respond with an appropriate strategy of its own.

Aging populations and an increased focus on health care by individuals, communities and governments can prove to be a favorable longer-term catalyst for RAD's growth and profitability. The trend for individuals and institutions to shift from higher-priced proprietary drugs to cheaper generic alternatives could also serve well for RAD, as that will lead to higher margins for the company.

Based on the analysis above on whether Rite Aid Stock (RAD) is a good buy, sell or hold, in our opinion RAD currently rates as a HOLD, but a potential BUY if the company’s financial prospects increase or in the event of a pull back on the stock.