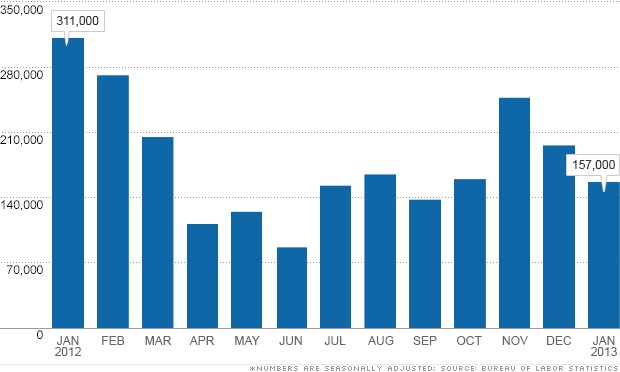 The U.S. economy continues to experience slow growth, despite efforts by the Federal Reserve to increase the pace of economic expansion. In January, the job market showed lackluster gains with the unemployment rate at 7.9% – not a remarkable start for the 2013 year.

Not all news for 2013 has been negative, however. Among other sectors, a notable improvement was seen in car sales. Both Ford and GM reported increased sales in January. Consumer sentiment, according to the University of Michigan, also rose.

On the unemployment front, however, a disposition to hire low-wage workers or only part-time workers continues to haunt the job outlook. In a tough job market, it is the employer who decides the wages, and wages are not keeping up with inflation. Many people are being forced to resort to part-time work because they are unable to find full-time work.

For young people, the outlook is even bleaker, with many young people no longer working. Generation Opportunity, a nonprofit organization that produces the Millennial (18-29 yrs old) Jobs Report, reported that the youth unemployment rate for 18-29 year-olds was 13% in January. This doesn’t even include the 1.7 million young adults not included as part of the work force because they have dropped out or given up searching for jobs.

It is no wonder that over 89% of Americans age 18-29 say the “current state of the economy is impacting their day-to-day lives.” Just when these young people should be starting their careers, their generation continues to be faced with low-wage jobs, or few job opportunities at all.

For all generations, the new economic reality has painted a bleak picture of opportunities. For those searching for employment or struggling to get by, there are many others who are on the same path.