With a rich history in the brokerage business that stretches back to the 1970s, TD Ameritrade Holding Corp (AMTD) re-discovered itself as a leader in the online trading industry during the tech boom of the 1990s. Over 40% owned by the Toronto-Dominion Bank (TD) of Canada, AMTD is still a force to be reckoned with.

With AMTD dependent on interest-rate sensitive sources (fees, commissions and margin rates) for more than 50% of its net revenues, the prevailing low-interest rate environment has made profit growth somewhat challenging. However, as indicated in the 5-year stock performance chart above, AMTD, like its competitors Charles Schwab Corporation (SCHW) and E*TRADE Financial Corporation (ETFC), has recovered well from the financial crisis. While all three peers have performed reasonably well in a low interest rate environment since early 2013, AMTD has been a clear front-runner in the recovery.

Given that both institutional and retail investors are only just acclimatizing themselves to a rebounding U.S. economy, TD Ameritrade shareholders may be eager to know whether the company still represents a buy, hold or sell value proposition for them.

Let's analyze some of the facts that have put TD Ameritrade where it is today.

When AMTD reported its Q3 2013 earnings results on July 23, Wall Street was surprised by the increase in quarterly earnings, which were buoyed by improving trading commissions and better interest revenues. This compared extremely favorably against competitor Charles Schwab (SCHW) who reported a nearly 7% decline in its most recent quarterly earnings.

The company also beat analysts’ forecasts on revenue. Coming in at $725M, revenue showed a 9% improvement from the $667M reported a year ago, and almost 7% higher on a quarter-over-quarter (Q/Q) basis. Encouragingly too, more than 53% of this revenue was asset-based.

Despite the prevailing low-interest rate environment, Net Interest revenues recorded a 5% increase on a Q/Q basis, and nearly 2% on a year-over-year (Y/Y) basis. Of further interest to shareholders was the 12% increase, Y/Y, of its average client trades per day which came in at over 399,000, making this AMTD's most active quarterly performance in almost 2 years. As a result, the market rewarded the discount broker with an over 4% increase in its stock price on the day of the results announcement.

Another important milestone was the improvement in cash held in client accounts, which rose from $83.6B last quarter, to $85.8B in the most recent quarter – an increase of nearly 2.6%. This represented 16.4% of the company's total assets, which stood at around 23.3% at the height of the financial crises in early 2009.

Other improved major milestones included an annualized 8% growth in new client assets of nearly $11B, a 23% Y/Y growth in market fee-based revenues of $65M, improved Operating Margins, both on a Q/Q and Y/Y basis, and a Q/Q and Y/Y improvement in annualized Return on shareholders' equity.

Must Read: Banks that pay very high interest on your savings account (reviews and comparison)

At the time of this analysis, AMTD has a Market Cap valued at about $14B+, which is almost 50% less than its rival SCHW, but is over 250% larger than ETFC. However, ETFC's Enterprise value is the highest amongst the three peers ($10.35B), with AMTD following close behind ($9.27B). 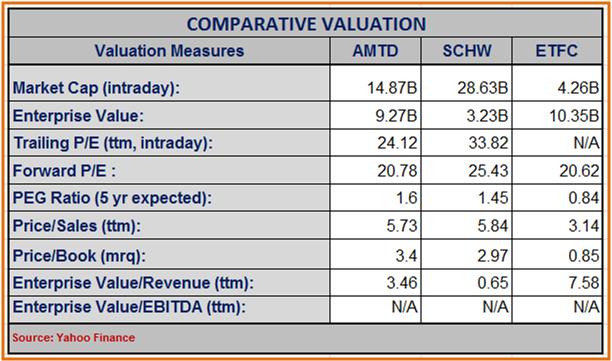 When measured on a Trailing P/E basis, AMTD is trading at 24.12x its trailing-12-month (TTM) earnings, which makes it a cheaper stock than SCHW which trades at 33.82x its TTM earnings. On a Forward P/E basis, both AMTD and ETFC are roughly in the same ball park, trading at around 21x their forward earnings. However, SCHW is slightly more expensive, as it trades at 25.43x its forward earnings.

Both AMTD and SCHW are priced at approximately 6x their TTM Sales, making ETFC (which trades at around 3x TTM Sales) half as expensive as its other two peers. With a 5-year expected PEG Ratio of under 1, ETFC also offers shareholders a much better value proposition for future growth, compared to both AMTD and SCHW, as investors will be paying much less (on a dollar-for-dollar basis) for every dollar of its future earnings.

However, with TTM Return on Assets and Return on Equity of 3.08% and 13.90% respectively, AMTD appears to have delivered shareholders much better value for their invested dollars than its two other competitors.

The much anticipated "great rotation", where investors are eventually (in the near future) expected to move their investments from Bonds and back into equity, should prove a great earnings catalyst for the company, if and when it does take place. The big questions however are, when exactly will this rotation happen and how significantly will AMTD benefit from this phenomenon?

Although the company has diversified its business over the years, and is now less tied solely to the online-trading commissions than it used to be, online trading fees and commissions account for over 40% of overall net revenue. Any situation that impacts the stock markets, and which scares risk-averse retail investors into the sidelines, can significantly dent the company's trading fee revenues.

Other News: Top 10 Largest Banks in the US | World

As disclosed in the Q3 earnings analysis, over 50% of the company's revenue comes from asset-based sources such as interest-based and fee-based income. As such, the prevailing low interest-rate environment is a drag on the company's earning potential. A rise in interest rates, which is inevitable at some point in the future, will therefore prove to be an extremely positive catalyst for the company, driving up income from margin loans.

Ultimately, global growth and specifically an improved U.S. economy will determine investors' trading and investing appetites. Should the ongoing economic recovery falter, it could further scare investors away from the stock market, thus depriving AMTD from future revenue.

AMTD could be described as having a relatively "shallow competitive moat", as there is not much to differentiate it's offerings from those of its competitors. Therefore, it is extremely important for the company to continue to re-invent itself and innovate in order to maintain its top-ranking position in the highly competitive brokerage and online trading industry.

Based on the above analysis, AMTD rates as a MODERATE BUY. As global and U.S economic conditions improve, and AMTD reports several more quarters of good performance, TD Ameritrade stock could rate as a STRONG BUY