The Housing Market is Improving 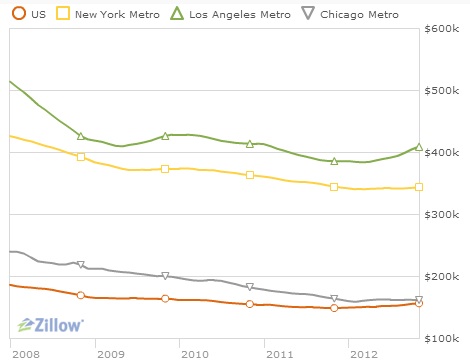 From the crushing recession stemming from 2008, the US housing market has had a gut wrenching last few years. With home prices down more than 70% from their all-time highs in some regions, many are wondering when the future will stop looking so bleak. Fortunately, I believe that time is now. New construction is strong and in 2012 home sales continue to grow (slowly, but still upwards).

Delinquency and foreclosure rates have fallen and changes to mortgage rules in 2013 will require banks to set aside $25 billion to help prevent foreclosures. Such an action will help improve overall housing market conditions.

Housing and construction starts are widely followed by investors as they provide a good lead on the direction on the housing market. An increase in starts signifies improvement while a decrease signifies deteriorating conditions.

There was a bit of a sting coming from Hurricane Sandy, specifically, the Northeast with a 5% drop in construction for the month of November. Considering the extent of Sandy's damage, that number is better than expected.

Existing Home sales are fighting their way up, every painful inch of the way. A bright spot for President Obama has been home sales which have had a slow rising trend the last 29 months. According to the National Association of Homebuilders monthly report, November saw home sales rise 5.9% to just over 5 million, the highest rate since 2009. Within these numbers we saw that sales from foreclosures and short sales have declined to 22%, a 7% drop from 29% a year ago. Known as Distressed Sales, these sales made up 42% of total home sales during and immediately after the recession.

Delinquency and foreclosures are still hanging around 10%. According to LPS' (Lender Processing Services) First Look monthly mortgage report this combined rate didn't waver much from October to November. This means that for every ten houses mortgaged, one of them is either behind on payments or has been foreclosed. This number sounds high, but according to Trulia's Chief Economist Jed Kolko, 10% “is at the lowest level in four years, and is 41% back to normal.” Again, this implies that the housing market is pointing towards a comeback.

Big money and new mortgage rules are coming to help homeowners in 2013. Coming into play for the new year, the government is making banks set aside $25 billion dollars to “fund loan modifications, foreclosure prevention programs, and compensation to homeowners wronged in the robo-signing scandal” (US News). Jed at Trulia states that the new mortgage and real estate rules coming from the Consumer Financial Protection Bureau “will need to strike a delicate balance between protecting consumers from the types of high-risk loans that contributed to the last crisis and giving lenders the incentive to expand mortgage credit”. What this means is that, between the $25 billion set aside and the new mortgage rules, the government is setting up a safety net for homeowners that are either distressed or are on the edge of being distressed.

What about the fiscal cliff? Despite the good news, housing recovery could be in jeopardy if the country does in fact go over the fiscal cliff. The Mortgage Tax Deduction, which allows homeowners to claim tax credits, depending on the size of their mortgage, is currently set to expire at midnight on December 31st. Perhaps haphazardly, this tax credit has become a significant part of the decision making process for potential homeowners. The impact of this not being extended as expected will definitely weaken home prices, and will hurt the housing market.

The United States recession has been brutal, and for some horrendous. With a housing market that essentially collapsed, all seemed lost a few years back. But 2012 brought a reversal to this decline. We are witnessing a housing recovery as home sales and new construction continue to increase. Along with that, we can see improving trends as “distressed sales” decline and delinquency plus foreclosure rates remain low. Finally, in 2013, stronger mortgage rules are expected to create a safety net for homeowners teetering on the edge of foreclosure.