TinEye is a "reverse picture" search engine. Upload any image and it will tell you where it came from, how it’s being used, and where one can locate the image in highest resolution. You can upload your favorite holiday party pictures and TinEye will let you know where and whether someone else has posted those same pictures on the web.

TinEye takes the traditional “image search” model (where you enter a text on Google images to find a matching image) and flips the process.  As the first company to use a content-based image retrieval (CBIR) platform to quickly find images, the firm has positioned itself at the forefront of search engine innovation.

TinEye.com was developed by Toronto-based Idée Inc., a visual search software company founded by Leila Boujnane and Paul Bloore. It was well-funded at the start, but later sought $12 million in venture capital.

Unlike some of its competitors – like Byo and Gazopa, whose search algorithms are based on color and shape similarity – TinEye uses the entire image to find direct matches.  It extracts colors from the submitted image and uses the resulting digital fingerprint to find matching images.

The program is not able to recognize people or objects within an image, but rather focuses on the image as a whole.  This does include some modifications of the image – versions that are smaller, larger, cropped, or even Photoshopped.  Results provide an extensive array of data, including the total number of matches in their database, a preview image and URL to each match, and a function called “Compare Images” which brings up a window in which original image and search result can be seen side-by-side.

The service is useful for identifying the creator or original source of photographs and artwork, a daunting task given the immense volume of unreferenced images floating in cyberspace.  The platform also provides a powerful tool for individuals who own rights to images to identify and locate copyright infringements.

As property rights and ownership of content becomes increasingly difficult to regulate, the search engine allows for data that was previously unreachable to be readily accessible; the service is expected to play an increasingly important role in legal cases and was recently featured on Techshow’s Favorite Sites for Lawyers.

TinEye is used by major news outlets including BBC and CNN to quickly fact-check an image’s origins and validity. This process has become centrally important to several high-profile news events, including Bin Laden’s death and the dissemination of doctored photographs in the aftermath of Hurricane Sandy. 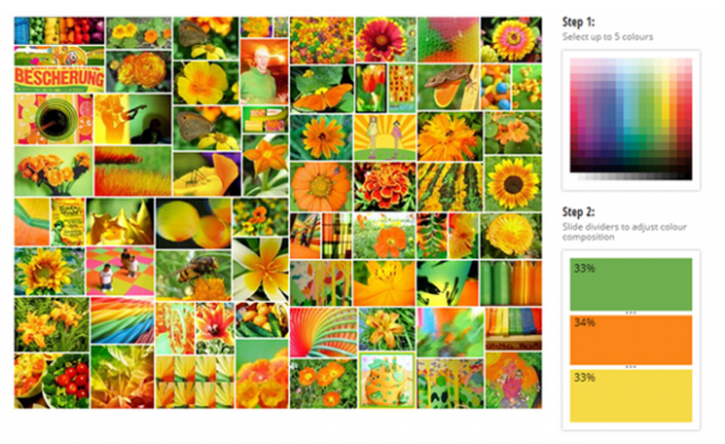 As of late 2012, Tineye announced that they had indexed over 2 billion images as a library to use for comparisons. However, compared to the sheer volume of images on the web, this is a relatively small proportion.  For instance, Flickr estimates that there are over 8 billion photos uploaded to the website alone, and Facebook sees over 300 million photos uploaded – per day.

The startup launched several APIs in late 2012 including MulticolorEngine, allowing users to search their image collections by color.  These offshoot services more closely resemble the existing competition, but aspire to revamp their color-recognition programming and combine increased accuracy with a more extensive image library.