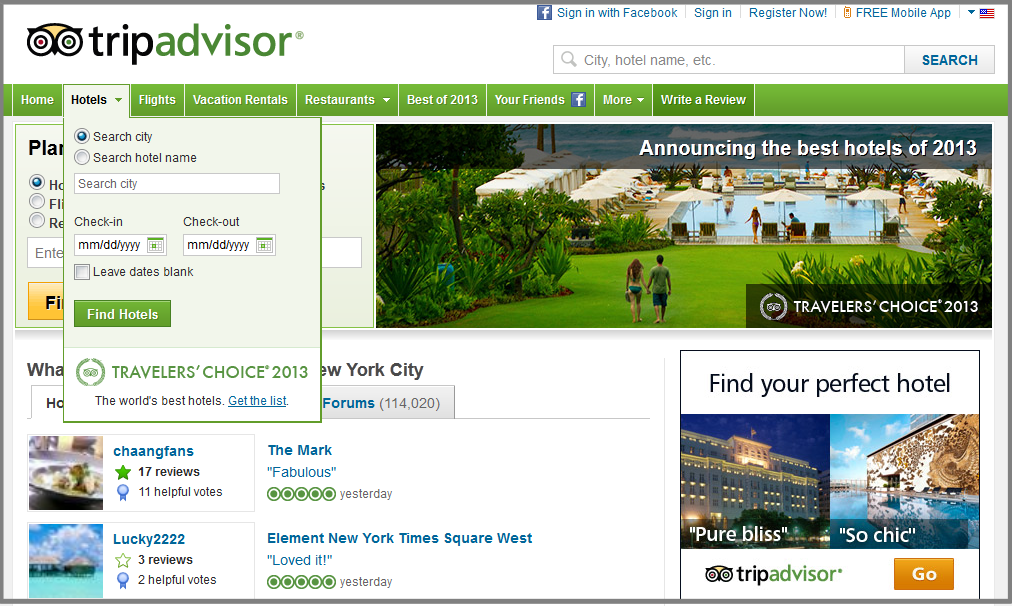 TripAdvisor (TRIP) is a company that investors should consider as part of their portolio. Since November of 2012, the stock, TRIP, has increased by 50% due to strenghening financial and operational fundamentals.

TRIP is considered the premier travel community portal and it hosts all things travel related, including hotel reviews, travel advice, price comparisons and flight information. Founded in 2000 by Stephen Kaufer, TripAdvisor has grown to be the largest online travel portal in the world, operating in 30 countries with over 60 million monthly visitors.

In March 2011, TripAdvisor acquired GetYourGuide tour service provider, in order to expand their services to supplemental activities. Expedia-hosted tours were later added, and in early 2013 TripAdvisor added Viator as a third supplier. Creating an umbrella that connects all major travel service providers, this strategy has proven successful for the company.

Other News: Wanderfly – Find Great Vacation Spots based on Others’ Recommendations

The company’s revenue is generated via three primary sources.

TripAdvisor was at the forefront of the targeted advertising phenomenon; their introduction of keyword-based advertisements occurred at the same time that Google and other internet giants were beginning to recognize the huge profit potential.

The company has established an increasingly large web footprint by connecting with other sites like hotel chains and location-specific travel sites. A lynchpin in the travel community, TripAdvisor has agreements with 500 partners to display its content. The company recently announced that the number of people viewing TripAdvisor content from third-party sites has doubled since 2011 to over 300 million per month.

Other News: Life360 – An Awesome App that Keeps your Family Safe and in Sync

Hotel chains have become increasingly willing to publish TripAdvisor reviews on their own site – the good, the bad, and the ugly – giving customers a detailed and nuanced glimpse into the hotel’s services. This keeps customers focused on the hotel’s site rather than redirecting them to TripAdvisor, where they may be tempted by other hotel offers. About 50 hotel chains have joined TripAdvisor (as of the end of 2012). Most have more than 50 reviews and some have as many as 8,000.

From Desk Jockeys to Travel Gurus

With most startup companies, the founders and leadership are intensely passionate about the product or service they provide. The TripAdvisor staff, however, is not comprised of travel buffs. Given the data-driven nature of the company, the company is led by talented software engineers rather than travel enthusiasts (including Kaufner). This has certainly worked in their favor. The pragmatic, problem-solving approach and careful integration into the online travel service industry have allowed TripAdvisor to turn an early-internet startup into a wildly successful enterprise.