One of the most anticipated Initial Public Offerings (IPO's) from late 2013, Twitter Inc (TWTR)  went public on November 6th 2013, and notched its first full day of trading on the NASDAQ on November 7th last year.

After a cautious game of wait-and-see, the company finally IPO'ed at $26 per share, but tremendous appetite to invest in Twitter and other social media stock pushed the script to close its debut trading day at $44.90 – a whooping 72.69% up from its IPO price. 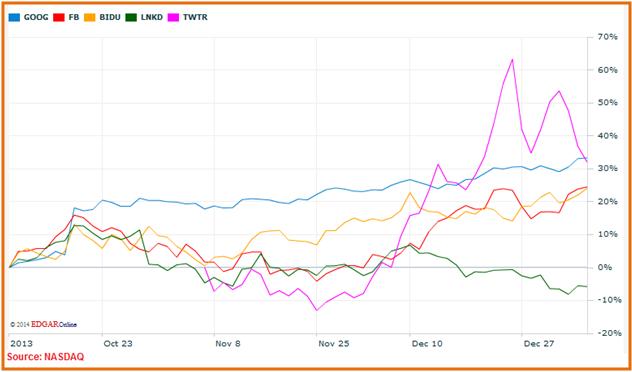 At one point late last year (Dec 26), Twitter stock price closed as high as $73.31. However, as is apparent from the chart above, which compares TWTR against industry peers Google (GOOG), Facebook (FB) and LinkedIn (LNKD), initial investor euphoria may finally be starting to wear off. Or is it?

Investors are probably wondering whether they Twitter stock is good buy now, or whether they might be better off putting money in some of the other tech/Social Media stocks instead.

Lets take a look at some of these questions to see if investing in TWTR makes good sense, and whether Twitter stock is a good buy, sell or hold.

TWTR's IPO filings indicated that it will double its annual revenue in 2013 compared to the $317M of 2012. Based on analysts' expectations however, TWTR is likely to show sales of approximately $217M for its Q4 2013 (its first as a public company), but the company will still be in the red to the tune of $-255M.

While it aggressively pushes to gain market share through strategic partnerships in the television arena, it may not yet be time to buy Twitter stock.

Most industry watchers believe that with the limited advertising budget that corporations have, established heavy hitters like Google and Facebook are more likely to attract those incremental advertising dollars.

Based on Morningstar data Twitter (market cap $31.7B) shares currently trade at a Price/Book valuation of 45.9x, which makes it a significantly more expensive stock than its industry peers or the S&P index as a whole. Comparatively speaking, industry giant GOOG (market cap $378B) trades at just 4.6x its Book Value, while FB (market cap $143B) has a 10.9x handle for its P/B valuation.

On a Price/Sales basis too TWTR appears to be way ahead of the index and its peers. Trading at 60.6x its Sales, TWTR dwarfs valuations on this metric for GOOG (6.5x), LNKD (17.6x) and FB (22.2x). This should surprise most investors especially since TWTR has not yet become profitable.

Another important valuation metrics that investors should take note of, before deciding to invest in Twitter stock, is its Price/Cash Flow valuation. Morningstar valuation rates this relatively new publicly traded company at an insanely high 3,333x Cash Flow. By comparison, GOOG (20.7x), FB (41.5x) and LNKD (57.5x) still only have P/CF valuations in the low to mid double digits.

So, can you buy stock in Twitter at current valuations hoping for a better future?  What can investors expect looking forward, in terms of TWTR's valuation? According to Morningstar, based on forward projections the stock is trading at a whooping 2500x Cash Flow. This is significantly higher than GOOG (19.2x), FB (37.7x) and LNKD (48.5x).

To say that at these valuations Twitter shares are expensive might be an understatement. Whether or not they deserves these high valuations is a subject for discussion later on in this analysis.

As is quite apparent from the share price performance chart above, the stock slumped on the very next trading day after its debut, and had been trading relatively flat until early December. Trading largely on news, the stock enjoyed a tremendous rally, rising from its Dec 2 closing price of $40.78 to close at $73.31 on Dec 26 – an 80% jump in slightly more than 20 days.

Investors looking to buy Twitter stock at current prices should bear in mind that in the 4 trading sessions since Jan 3 2014, when the stock saw a 2.22% gain, the stock has consistently closed lower, losing nearly 17% (including the current trading day) of its value. In this down trend, TWTR has broken through its 15-day Simple Moving Average (SMA) as well as pierced support at the 20-day SMA.

At todays levels ($58.65) Twitter shares are just $2.95 shy of their 30-day SMA, but still roughly $20 higher than the low end of its 52-week trading range ($38.80). Investors will however need to keep a close watch to see whether the stock breaches the 30-day SMA ($55.70).  Additionally, if the company produces an earnings disappointment on Feb 5 the stock could quickly spiral lower, which would make it a bad time to invest in Twitter stock today.

Boasting upwards of a 100 million daily users, TWTR recently (in Q3 2013) surpassed a unique milestone for the company – 230-million monthly users that spew out a staggering 350B tweets! This is definitely a huge success by any standard, and the company is well positioned to tap this captive audience. The key however is to successfully monetize the ardent consumers of the company's products and services. More specifically, the challenge will be to leverage mobile technologies to drive sales and revenue.

Rival social networking site FB had a similar challenge before it went public. Analysts and company watchers were skeptical whether FB could ever harness its large user base and convert them into real dollars through advertising revenue. The last 2 quarters for FB have been positive, with all metrics showing an increase in mobile advertising revenues.

Fortunately for TWTR the challenge might not be as steep as its rival. If (pre IPO) company news is to be believed then nearly 65% of its revenue between March-June 2013 was generated from mobile advertising. Research from eMarketer indicates TWTR could grow its share of the digital ad revenue pie from 0.6% in 2012 to 2.2% by 2015.

The challenge now is to show whether company management can sustain and grow that percentage, especially against competitors like GOOG, FB, LNKD, Yahoo and its Chinese peer Baidu. However, with the global digital/mobile ad pie expected to grow from $10B to $52.2B by 2017, the company has a better chance of cutting itself a bigger slice of that revenue pie.

Public companies come under greater scrutiny as shareholders and regulators demand more transparency in their reporting. Sometimes, when balancing the line between adequate disclosure and "misrepresentation", companies (like Facebook) commit missteps that prove to be unfavorable catalysts for the company's image and stock price. Case in point: Investors are suing Facebook for lack of full disclosure during its IPO. Let's hope TWTR doesn't face the same fate from investors who decided to buy Twitter stock.

On the bright side, the company is seeing more front-line analysts take interest in its future, which in itself could prove to be a favorable catalyst. In mid-Dec BMO Capital Markets initiated coverage of the stock with a "Market Perform" rating. However, the analysts' 1-year price target of $55.00 would mean there is still a 17.30% downside based on today's Twitter stock price.

On the other extreme, analysts at CRT Capital are very optimistic about the company's future, and have recently raised their $40 price target for TWTR to $65, with a "Buy" recommendation. Wells Fargo & Co in the meantime has issued a downgrade to "Underperform" from "Market Perform" in mid Dec, while Morgan Stanley cut its rating to "Sell" in early Jan 2014.

Twitter's S-1 filing allows employees to start divesting their shares (received as part of their company stock program) on Feb 15 2014. This move might put yet more downward pressure on the stock's price.

When making a decision to buy Twitter stock investors would also be wise to consider what consensus analyst estimates are for the stock. Of the 30 or so analysts that do follow TWTR, almost 50% (15) have a "Hold" recommendation, with the remainder are split almost evenly between "Buy" and "Sell".  The consensus price target for Twitter shares appears to be $45.68 – almost 22% lower than today.

So, is Twitter a buy, sell or hold? With not much publicly disclosed financial and operational information available, other than strategically issued Press Releases, it is difficult to conclude if you should buy Twitter stock at current levels. Until the company has posted several quarters of healthy results, investors should be wary about putting new money into TWTR.  In light of this, TWTR would remain a "HOLD".