Forget about hailing a cab. Let your iPhone do it for you. That is the concept that started Uber, a mobile app that connects cab drivers with those looking for a cab ride. One of the best things about this service is that you can leave your cash at home. You are charged via your credit card linked to your Uber account.

The startup was co-founded by Travis Kalanick, a serial entrepreneur with consumer internet, transportation and enterprise content startups under his belt. Another co-founder is Garrett Camp, the founding CEO of StumbleUpon.com.

Uber allows you to enjoy an on-demand car service right at your fingertips. Just install their mobile app on your smart phone and you can have a luxurious black sedan at your doorstep, sometimes within minutes. You can also opt for a cheaper option that is the UBERx, a hybrid and mid-range car that comes in different colors.

So, whether you are on vacation or just on your way to a business meeting, you will never have to get into a fist fight with another passenger over a yellow cab again! All it takes is a tap on your smart phone and a sleek car will be waiting at the curbside with your own driver to take you wherever you need to go. Base fares in San Francisco, CA starts at $5.75 with various per mile or per minute charges depending on the distance travelled. 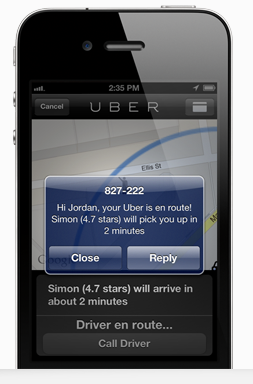 The company, however, has a big problem that threatens its survival: regulators in the US and abroad are trying to shut it down. As reported in a December 2012 New York Times article: “Summoning a taxi or car service with your smartphone feels like the future. City governments around the world can agree on that. But many of them are proposing new rules that would run Uber, one of the most prominent ride-requesting apps, off the road.”

Uber faces other challenges including lawsuits from established car service organizations. The California Public Utilities Commission has also levied a $20,000 fine on Uber for operating without a license. A big concern amongst regulators is that mobile app services like Uber can pose a risk to consumers. Travis Kalanick claims that regulators are mostly interested in shutting down Uber in order to protect taxi monopolies.