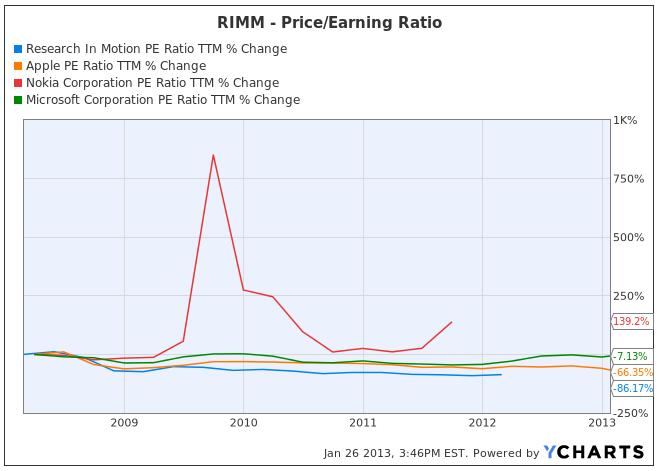 On a TTM Price/Earning basis, RIMM trades at a valuation of -10.6x, while the industry average is 30.5x. A comparison of RIMM's value against some of its competitors, based on percentage change in TTM P/E, clearly shows that the stock has been a leader in declining shareholder value on that score. While both Apple (AAPL) and Microsoft (MSFT) haven't added much value to their shareholders either, Nokia (NOK) has been a stellar performer in that respect. Still, like RIMM, the Finish giant struggles to maintain its place in the brutal Smartphone war, passing on a dividend payout this latest quarter – a first for Nokia in over 130 years!

Looking at RIMM on a Price/Earnings Growth Rate basis too, we see that the stock appears rather overpriced, given the type of earnings growth expected 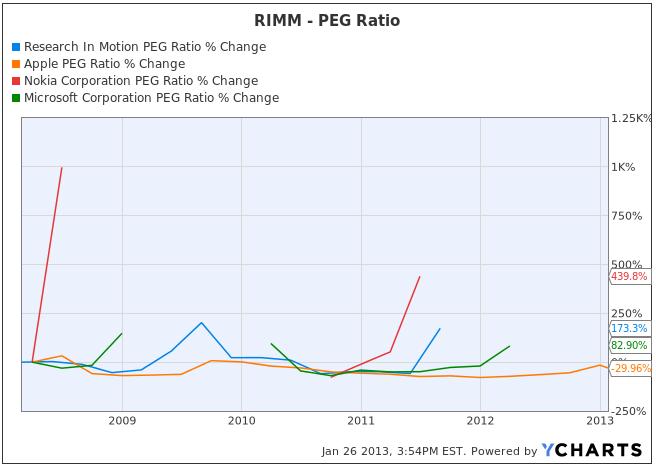 from the company. Despite all the hype about BB-10, and even with AAPL's recent fall from grace factored in, RIMM still appears overvalued compared to AAPL and MSFT.  This valuation could potentially change in RIMM's favour though, if: a) BB-10 becomes the hit that many analysts are hoping it will, or b) If BB-10 proves to be "just average" but Microsoft's Windows phone stumbles badly.  If BB-10 fails to impress investors and consumers in a big way, future earnings growth will be in doubt, making the stock even more overvalued than it is now.

One valuation measure however indicates that RIMM is in a better position than all of the competition – the Price to Book Value. The reason that RIMM fairs well in this measure is its relatively large cash balance, and no debt on its balance sheet. Both of these elements mean that investors are paying much less for RIMM, than say AAPL, NOK or MSFT, than the company is actually worth in terms of assets that it holds. 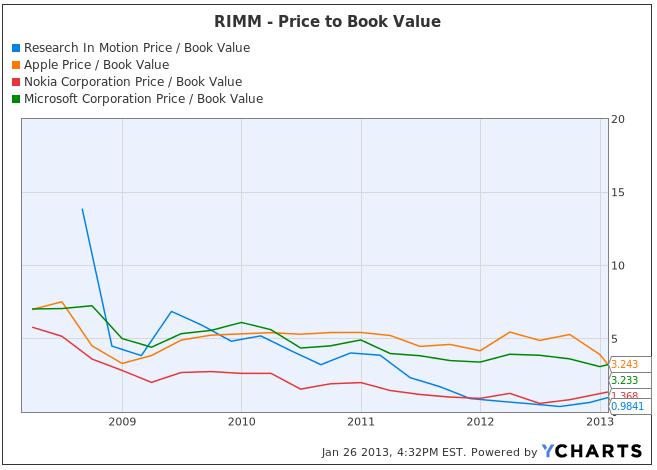 So what does this mean for stockholders? Well, if BB-10 fizzles out with a big bang, like some analysts believe it will, and company management decides to put itself up for sale, because of its strong books, the sale value of the stock is likely to be much higher than current share prices. Investors holding RIMM shares on or around current levels can therefore look forward to receiving a (considerable?) premium for their shares from any potential buyer of the company's assets.