Is Vodafone Stock (VOD) a Good Buy, Sell or Hold in 2013? Stock Analysis

On Thursday, 2/7/2013, Vodafone released its “Interim Management Statement for the Quarter Ended 31 December 2012”. Below are the highlights:

Vodafone Group’s stock (VOD) is traded on the Nasdaq and also on the London Stock Exchange (LSE). It trades under the ticker “VOD” on both exchanges. For the past two years, the stock has traded within a range of $25 and $30 on the Nasdaq and a range of 154.4 and 191.2 pence on the LSE (See below charts).

(Pence) Stocks on the LSE are normally quoted in pence. As shares fluctuate often by a few pence during the trading day, it is a lot easier to have it displayed in such a format. (1 Pound = 100 Pence, just as 1 Dollar = 100 cents). 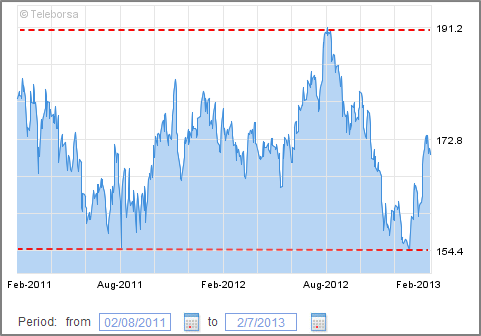 Taking Vodafone’s financial and operational prospects into consideration, combined with the tight trading range of the stock, a lot of investors are asking: Is VOD a Buy, Sell or Hold in 2013?